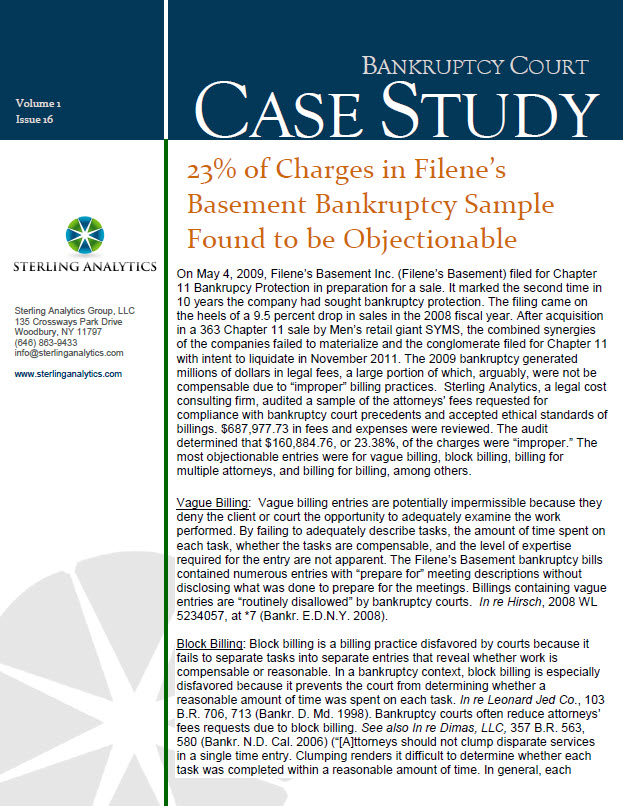 On May 4, 2009, Filene’s Basement Inc. (Filene’s Basement) filed for Chapter 11 Bankruptcy Protection in preparation for a sale. It marked the second time in 10 years the company had sought bankruptcy protection. The filing came on the heels of a 9.5 percent drop in sales in the 2008 fiscal year. After acquisition in a 363 Chapter 11 sale by Men’s retail giant SYMS, the combined synergies of the companies failed to materialize and the conglomerate filed for Chapter 11 with intent to liquidate in November 2011. The 2009 bankruptcy generated millions of dollars in legal fees, a large portion of which, arguably, were not be compensable due to “improper” billing practices. Sterling Analytics, a legal cost consulting firm, audited a sample of the attorneys’ fees requested for compliance with bankruptcy court precedents and accepted ethical standards of billings. $687,977.73 in fees and expenses were reviewed. The audit determined that $160,884.76, or 23.38%, of the charges were “improper.” The most objectionable entries were for vague billing, block billing, billing for multiple attorneys, and billing for billing, among others.

Vague Billing: Vague billing entries are potentially impermissible because they deny the client or court the opportunity to adequately examine the work performed. By failing to adequately describe tasks, the amount of time spent on each task, whether the tasks are compensable, and the level of expertise required for the entry are not apparent. The Filene’s Basement bankruptcy bills contained numerous entries with “prepare for” meeting descriptions without disclosing what was done to prepare for the meetings. Billings containing vague entries are “routinely disallowed” by bankruptcy courts. In re Hirsch, 2008 WL 5234057, at *7 (Bankr. E.D.N.Y. 2008).

Block Billing: Block billing is a billing practice disfavored by courts because it fails to separate tasks into separate entries that reveal whether work is compensable or reasonable. In a bankruptcy context, block billing is especially disfavored because it prevents the court from determining whether a reasonable amount of time was spent on each task. In re Leonard Jed Co., 103 B.R. 706, 713 (Bankr. D. Md. 1998). Bankruptcy courts often reduce attorneys’ fees requests due to block billing. See also In re Dimas, LLC, 357 B.R. 563, 580 (Bankr. N.D. Cal. 2006) (“[A]ttorneys should not clump disparate services in a single time entry. Clumping renders it difficult to determine whether each task was completed within a reasonable amount of time. In general, each discrete task should be separately described in its own time entry.”), aff’d in part, rev’d in part, 2009 WL 7809032 (9th Cir. 2009).

Multiple Attorneys at Meetings: 4.5% of the billing sample contained entries where multiple attorneys were at meetings, conference calls, and the like without providing adequate documentation of why more than one attorney was needed. When billing for multiple attorneys, the burden is on the firm to show that each attorney contributed to the meeting, deposition, or such event. In re Leonard Jed Co., 103 B.R. 706, 713 (Bankr. D. Md. 1998) (“Time spent by partners and associates in conferences and meetings is compensable, but not by more than one participant. In re Pettibone Corp., 74 B.R. at 307; In re Metro Transportation Co., 78 B.R. at 417-18; Cf. In re Yankee Seafood Corp., 53 B.R. 285, 286 (Bankr. R.I. 1985)”; “Examples include office conferences of two or more attorneys where all of the participants charged their full hourly rates; meetings with others where more than one attorney from the firm was in attendance and both submitted bills for the same meeting without demonstrating the need for both of them to have been there.”).

Billing for Billing: It is highly inappropriate for lawyers to bill for their time spent billing. While it is understood that working on a request for attorneys’ fees in civil litigation is a billable activity, it is notable that the work assembling the document is primarily legal. Editing hours, maintaining timesheets, and the like are not legal functions that should be passed down to the client (or estate, in the bankruptcy context). In re Meese, 907 F.2d 1192, 1203 (D.C. Cir. 1990) (disallowing fees claimed for the preparation of the fee application) United States v.University Medical Associates, 2002 U.S. Dist. LEXIS 26986, 2002 WL 34236885 at 18 (D.S.C. 2002) (finding that counsel cannot charge clients for time spent creating bills). In re Dimas, LLC, 357 B.R. 563, 591 (Bankr. N.D. Cal. 2006) (“However, the time the applicant expended to review and edit its time records and to manually project bill is not compensable.”), aff’d in part, rev’d in part, 2009 WL 7809032 (9th Cir. 2009).