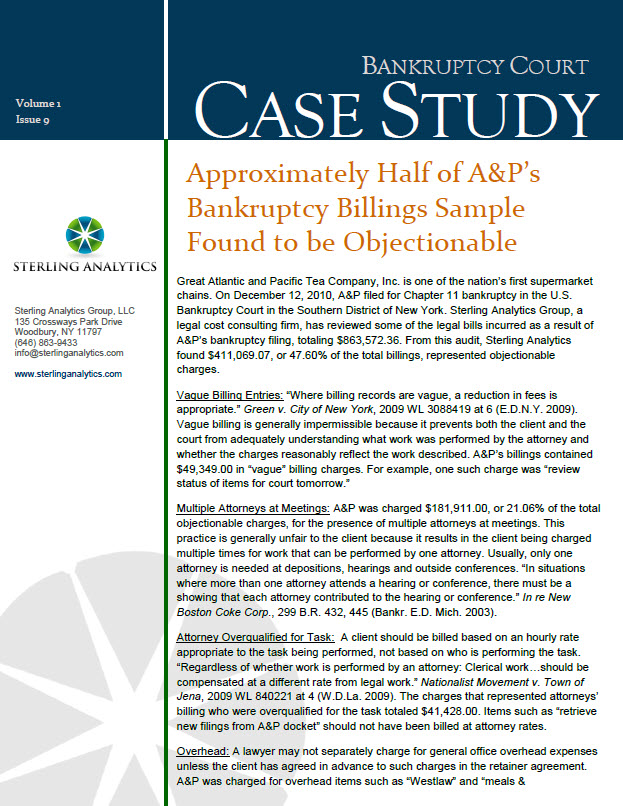 Great Atlantic and Pacific Tea Company, Inc. is one of the nation’s first supermarket chains. On December 12, 2010, A&P filed for Chapter 11 bankruptcy in the U.S. Bankruptcy Court in the Southern District of New York. Sterling Analytics Group, a legal cost consulting firm, has reviewed some of the legal bills incurred as a result of A&P’s bankruptcy filing, totaling $863,572.36. From this audit, Sterling Analytics found $411,069.07, or 47.60% of the total billings, represented objectionable charges.

Vague Billing Entries: “Where billing records are vague, a reduction in fees is appropriate.” Green v. City of New York, 2009 WL 3088419 at 6 (E.D.N.Y. 2009). Vague billing is generally impermissible because it prevents both the client and the court from adequately understanding what work was performed by the attorney and whether the charges reasonably reflect the work described. A&P’s billings contained $49,349.00 in “vague” billing charges. For example, one such charge was “review status of items for court tomorrow.”

Multiple Attorneys at Meetings: A&P was charged $181,911.00, or 21.06% of the total objectionable charges, for the presence of multiple attorneys at meetings. This practice is generally unfair to the client because it results in the client being charged multiple times for work that can be performed by one attorney. Usually, only one attorney is needed at depositions, hearings and outside conferences. “In situations where more than one attorney attends a hearing or conference, there must be a showing that each attorney contributed to the hearing or conference.” In re New Boston Coke Corp., 299 B.R. 432, 445 (Bankr. E.D. Mich. 2003).

Attorney Overqualified for Task: A client should be billed based on an hourly rate appropriate to the task being performed, not based on who is performing the task. “Regardless of whether work is performed by an attorney: Clerical work…should be compensated at a different rate from legal work.” Nationalist Movement v. Town of Jena, 2009 WL 840221 at 4 (W.D.La. 2009). The charges that represented attorneys’ billing who were overqualified for the task totaled $41,428.00. Items such as “retrieve new filings from A&P docket” should not have been billed at attorney rates.

Overhead: A lawyer may not separately charge for general office overhead expenses unless the client has agreed in advance to such charges in the retainer agreement. A&P was charged for overhead items such as “Westlaw” and “meals & entertainment,” among other charges. These charges constituted 4.3% of the total objectionable charges, or $37,160.07. See Ringcentral, Inc v. Quimby, 711 F. Supp.2d 1048, 1066 (N.D. Cal. 2010) (“The Court considers legal research fees, such as Westlaw fees, to be overhead and not properly considered costs that may be awarded”).

Billing for Long Days: Sterling Analytics found objectionable charges representing long billing days totaling $30,833.00. Billing double digit hours in one day, or for a period of days, is questionable and usually excessive. See Allen v. City of Los Angeles, 1995 WL 433720 at *8 (C.D. Cal. 1995) (“The court may reduce as excessive…claims of having worked an inordinate number of hours in a single day”). When an attorney bills such a high amount of hours it is unlikely that the attorney actually spent that entire amount of time performing the task or tasks described.

Billing for Billing: “Most lawyers do not bill their fee-paying clients for hours spent preparing bills.” Shorter v. Valley Bank & Trust Co., 678 F.Supp. 714, 725 (N.D. Ill. 1988). A&P was charged $17,550.50 for billing tasks, including “review December daynotes”. A client should not be billed for time spent maintaining or creating billing records, or for reviewing or discussing such records.

Overstaffing: “Using multiple attorneys in a simple case…poses the serious potential…for duplication of work or overstaffing.” Tucker v. City of New York, 704 F.Supp.2d 347, 355 (S.D.N.Y. 2010). The client should not have to pay for the work of multiple attorneys or paralegals where such work could be completed by one or a few. Charges for overstaffing totaled $42,728.50, or 4.95% of the total objectionable charges. For example, A&P was billed for three separate people to review one motion.