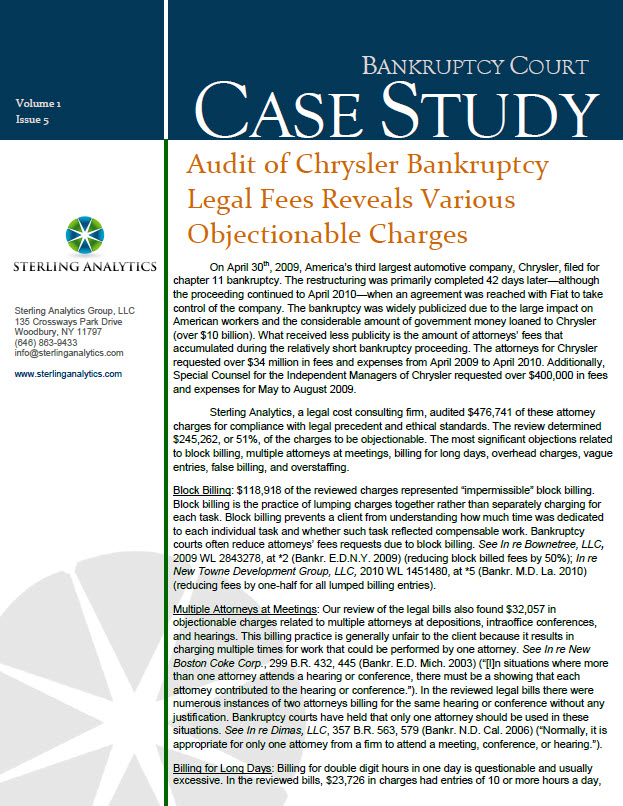 On April 30th, 2009, America’s third largest automotive company, Chrysler, filed for chapter 11 bankruptcy. The restructuring was primarily completed 42 days later—although the proceeding continued to April 2010—when an agreement was reached with Fiat to take control of the company. The bankruptcy was widely publicized due to the large impact on American workers and the considerable amount of government money loaned to Chrysler (over $10 billion). What received less publicity is the amount of attorneys’ fees that accumulated during the relatively short bankruptcy proceeding. The attorneys for Chrysler requested over $34 million in fees and expenses from April 2009 to April 2010. Additionally, Special Counsel for the Independent Managers of Chrysler requested over $400,000 in fees and expenses for May to August 2009.

Sterling Analytics, a legal cost consulting firm, audited $476,741 of these attorney charges for compliance with legal precedent and ethical standards. The review determined $245,262, or 51%, of the charges to be objectionable. The most significant objections related to block billing, multiple attorneys at meetings, billing for long days, overhead charges, vague entries, false billing, and overstaffing.

Block Billing: $118,918 of the reviewed charges represented “impermissible” block billing. Block billing is the practice of lumping charges together rather than separately charging for each task. Block billing prevents a client from understanding how much time was dedicated to each individual task and whether such task reflected compensable work. Bankruptcy courts often reduce attorneys’ fees requests due to block billing. See In re Bownetree, LLC, 2009 WL 2843278, at *2 (Bankr. E.D.N.Y. 2009) (reducing block billed fees by 50%); In re New Towne Development Group, LLC, 2010 WL 1451480, at *5 (Bankr. M.D. La. 2010) (reducing fees by one-half for all lumped billing entries).

Multiple Attorneys at Meetings: Our review of the legal bills also found $32,057 in objectionable charges related to multiple attorneys at depositions, intraoffice conferences, and hearings. This billing practice is generally unfair to the client because it results in charging multiple times for work that could be performed by one attorney. See In re New Boston Coke Corp., 299 B.R. 432, 445 (Bankr. E.D. Mich. 2003) (“[I]n situations where more than one attorney attends a hearing or conference, there must be a showing that each attorney contributed to the hearing or conference.”). In the reviewed legal bills there were numerous instances of two attorneys billing for the same hearing or conference without any justification. Bankruptcy courts have held that only one attorney should be used in these situations. See In re Dimas, LLC, 357 B.R. 563, 579 (Bankr. N.D. Cal. 2006) (“Normally, it is appropriate for only one attorney from a firm to attend a meeting, conference, or hearing.”).

Billing for Long Days: Billing for double digit hours in one day is questionable and usually excessive. In the reviewed bills, $23,726 in charges had entries of 10 or more hours a day, including an entry for 13.80 hours. Bankruptcy courts have reduced attorney fee requests due to billing for long days. See In re New Boston Coke Corp., 299 B.R. 432, 448 (Bankr. E.D. Mich. 2003) (“Except in unusual circumstances it is not realistic for an attorney to bill in excess of six to seven hours per day . . . . While it is certainly possible that an attorney could bill ten-, nineteen- or twenty-hour days, it is unlikely that all of that billed time is compensable.”).

Overhead Charges: In the absence of express permission from a client, overhead is not compensable. A law firm’s overhead is the cost of doing business and should not be passed on to individual clients. See ABA Formal Opinion 93-379 (December 6, 1993). $17,146 in overhead charges were found in the review of Chrysler’s bankruptcy bills. Examples of such charges include “word processing”, “meal”, “telephone”, “delivery services”, and “local travel”. Many bankruptcy courts have disallowed these charges from attorney fee awards. See In re Meese, 907 F.2d 1192, 1204 (D.C. 1990) (disallowing compensation for meals), In re Bicoastal, 121 B.R. 653, 656 (Bankr. M.D. Fla. 1990) (disallowing local travel and delivery services expenses), In re Media Vision Technology, 913 F.Supp. 1362, 1371-72 (N.D.Cal.1996) (disallowing word processing expenses), In re Theopholis Thacker, 48 B.R. 161, 164 (N.D.Ill.1985) (holding overhead includes telephone expenses, and the local commuting and meal expenses of employees).

Vague Billing Entries: Vague entries are “impermissible” because they prevent the client from adequately determining what work was performed and whether the charges fairly reflect the work described. $17,605 of the reviewed charges were “overly vague”. Examples of such vague entries include “review of case status”, “follow sale hearing” and “attn. to retention issues.” Bills containing vague entries are “routinely disallowed” by bankruptcy courts. In re Hirsch, 2008 WL 5234057, at *7 (Bankr. E.D.N.Y. 2008). See also In re Baker, 374 B.R. 489 (E.D.N.Y. 2007) (reducing vague billing entries by 30%).

False Billing: In the reviewed bills there was a total of $16,394 of objectionable “false” billing charges. These entries represented two attorneys billing for the same task but recording different time. For example, one attorney billed a meeting at 2.5 hours and another attorney billed the same meeting at .9 hours. This happened several times throughout the reviewed sample of bills. “False” billing is a clearly impermissible billing practice because it violates ethical rules. See Model Rules of Professional Conduct 1.5.

Overstaffing: The use of excessive amounts of attorneys or paralegals usually results in unnecessary duplication of work. $14,979 of the reviewed charges constituted overstaffing. For example, three attorneys billed for reviewing sales objections concurrently. The inefficiencies caused by overstaffing drives up legal costs. Bankruptcy courts with often reduce awards because of these inefficiencies. See In re Kowalski, 402 B.R. 843,850 (Bankr. N.D. Ill. 2009) (finding that overstaffing leads to inefficient use of time and services which is therefore is not fully compensable).