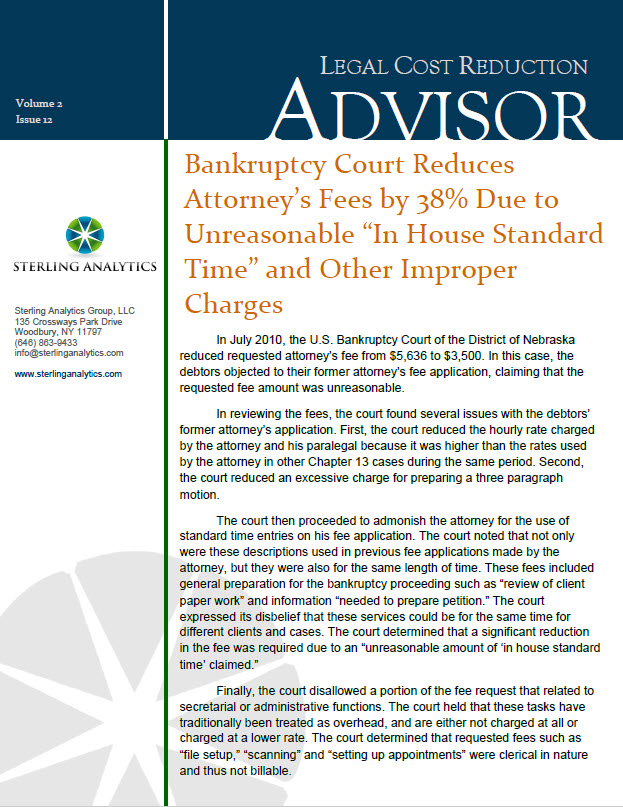 In July 2010, the U.S. Bankruptcy Court of the District of Nebraska reduced requested attorney’s fee from $5,636 to $3,500. In this case, the debtors objected to their former attorney’s fee application, claiming that the requested fee amount was unreasonable.

The court then proceeded to admonish the attorney for the use of standard time entries on his fee application. The court noted that not only were these descriptions used in previous fee applications made by the attorney, but they were also for the same length of time. These fees included general preparation for the bankruptcy proceeding such as “review of client paper work” and information “needed to prepare petition.” The court expressed its disbelief that these services could be for the same time for different clients and cases. The court determined that a significant reduction in the fee was required due to an “unreasonable amount of ‘in house standard time’ claimed.”

Finally, the court disallowed a portion of the fee request that related to secretarial or administrative functions. The court held that these tasks have traditionally been treated as overhead, and are either not charged at all or charged at a lower rate. The court determined that requested fees such as “file setup,” “scanning” and “setting up appointments” were clerical in nature and thus not billable.

Implications for Legal Billing: This case shows several of the inappropriate practices that are used in legal billing. First, consistent hourly rates should be used for the same work during the same period. Clients should include provisions in their billing guidelines that require that attorney’s not bill lower hourly rates to other clients, typically known as a “most favored nation” clause. Second, billed hours should accurately reflect the time required to complete the task described. If an attorney spends an excessive amount of time on a simple task, the entire amount should not be charged to the client.

Additionally, attorneys should not be recycling charges for reuse on similar jobs. To avoid the use of these standard charges, legal bills need to be review to ensure charges are client specific and not generic charges used to increase legal fees. Finally, legal bills should charge for “legal” work only and billing for clerical work is generally unallowable.

* In re Beenblossom, 2010 WL 2710417 (Bankr. D. Neb. 2010). Full copies of court decisions may be available through counsel or through various Internet links or paid services.