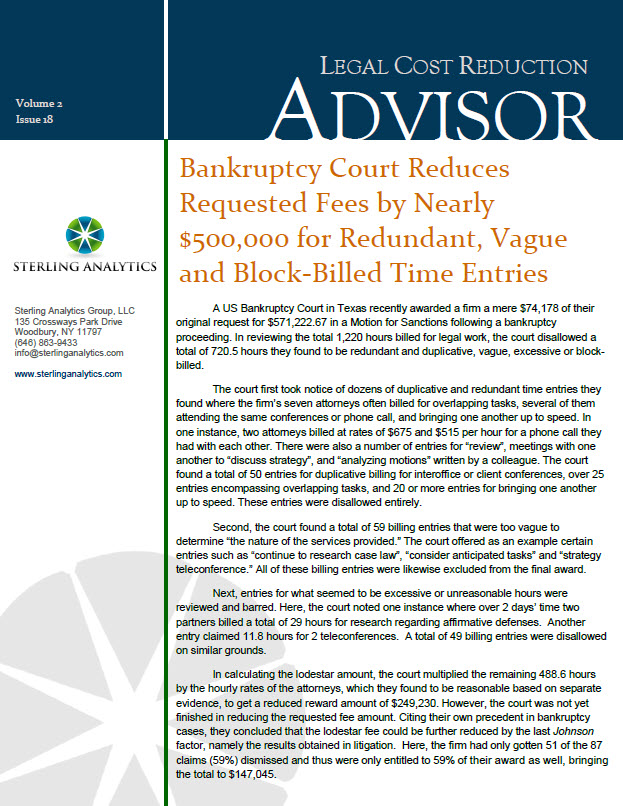 A US Bankruptcy Court in Texas recently awarded a firm a mere $74,178 of their original request for $571,222.67 in a Motion for Sanctions following a bankruptcy proceeding. In reviewing the total 1,220 hours billed for legal work, the court disallowed a total of 720.5 hours they found to be redundant and duplicative, vague, excessive or block-billed.

The court first took notice of dozens of duplicative and redundant time entries they found where the firm’s seven attorneys often billed for overlapping tasks, several of them attending the same conferences or phone call, and bringing one another up to speed. In one instance, two attorneys billed at rates of $675 and $515 per hour for a phone call they had with each other. There were also a number of entries for “review”, meetings with one another to “discuss strategy”, and “analyzing motions” written by a colleague. The court found a total of 50 entries for duplicative billing for interoffice or client conferences, over 25 entries encompassing overlapping tasks, and 20 or more entries for bringing one another up to speed. These entries were disallowed entirely.

Second, the court found a total of 59 billing entries that were too vague to determine “the nature of the services provided.” The court offered as an example certain entries such as “continue to research case law”, “consider anticipated tasks” and “strategy teleconference.” All of these billing entries were likewise excluded from the final award.

Next, entries for what seemed to be excessive or unreasonable hours were reviewed and barred. Here, the court noted one instance where over 2 days’ time two partners billed a total of 29 hours for research regarding affirmative defenses. Another entry claimed 11.8 hours for 2 teleconferences. A total of 49 billing entries were disallowed on similar grounds.

In calculating the lodestar amount, the court multiplied the remaining 488.6 hours by the hourly rates of the attorneys, which they found to be reasonable based on separate evidence, to get a reduced reward amount of $249,230. However, the court was not yet finished in reducing the requested fee amount. Citing their own precedent in bankruptcy cases, they concluded that the lodestar fee could be further reduced by the last Johnson factor, namely the results obtained in litigation. Here, the firm had only gotten 51 of the 87 claims (59%) dismissed and thus were only entitled to 59% of their award as well, bringing the total to $147,045.

Finally, the court announced that it planned to further reduce the total fee award based upon many “lumped fee”, or block-billed entries. Here, there were many billing entries for over 10 hours at a time for lists of 5 or 6 separate tasks. In one instance, an attorney billed 22 different tasks for one 5-hour entry. Noting that courts will generally not award fees for time entries that are lumped together, they found a 50% reduction overall to be appropriate because “as an appointee of the United States Trustee, the Chapter 7 trustee should not be in direct violation of the U.S. Trustee’s guidelines forbidding lumping”. Following the 50% reduction, the remaining legal fee award totaled $73,522. In reviewing final costs, the court disallowed $560 in travel fees as excessive in light of the hourly rate already being charged to the client. The take home amount for the firm was $74,178, just shy of $500,000 less than what was originally requested.

Implications for Legal Billing: This case reflects a growing trend in judicial oversight for excessive and redundant billing. Billing by multiple attorneys for attending the same conference, meeting with a client, hearing, or for the same phone call will frequently result in an exclusion of any duplicative hours. Reviewing one another’s work and bringing a colleague “up to speed” will likewise often be met with a dismissal of hours billed as such.

Additionally, entries for hours that are too vague for the court to determine whether any legal work was actually done, or entries that lump together multiple tasks making it impossible for the court to determine whether time spent on each task was reasonable will be similarly rejected. In the latter example, reductions of the total request by 25-50% have become routine.

Finally, time and time again we’ve seen hours billed for “travel” rejected by the court where a full hourly billing rate was applied. The law generally requires any travel to be billed at only a 50% hourly rate and detailed accounts of travel expenses such as airfare, fuel, or lodging to be recorded and accounted for.