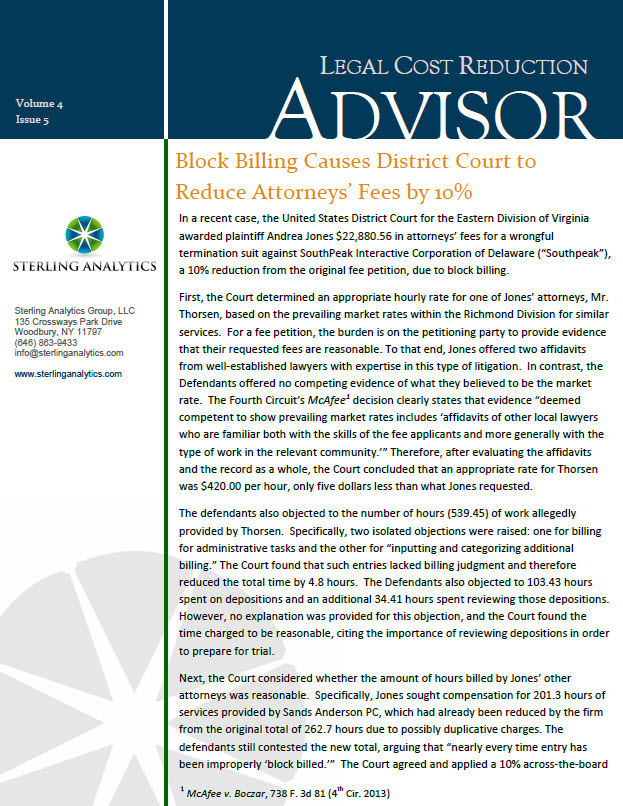 In a recent case, the United States District Court for the Eastern Division of Virginia awarded plaintiff Andrea Jones $22,880.56 in attorneys’ fees for a wrongful termination suit against SouthPeak Interactive Corporation of Delaware (“Southpeak”), a 10% reduction from the original fee petition, due to block billing.

First, the Court determined an appropriate hourly rate for one of Jones’ attorneys, Mr. Thorsen, based on the prevailing market rates within the Richmond Division for similar services. For a fee petition, the burden is on the petitioning party to provide evidence that their requested fees are reasonable. To that end, Jones offered two affidavits from well-established lawyers with great expertise in this type of litigation. In contrast, the Defendants offered no competing evidence of what they believed to be the market rate. The Fourth Circuit’s McAfee[1] decision clearly states that evidence “deemed competent to show prevailing market rates includes ‘affidavits of other local lawyers who are familiar both with the skills of the fee applicants and more generally with the type of work in the relevant community.’” Therefore, after evaluating the affidavits and the record as a whole, the Court concluded that an appropriate rate for Thorsen was $420.00 per hour, only five dollars less than what Jones requested.

The defendants also objected to the number of hours (539.45) of work allegedly provided by Thorsen. Specifically, two isolated objections were raised: one for billing for administrative tasks and the other for “inputting and categorizing additional billing.” The Court found that such entries lacked billing judgment and therefore reduced the total time by 4.8 hours. The Defendants also objected to 103.43 hours spent on depositions and an additional 34.41 hours spent reviewing those depositions. However, no explanation was provided for this objection, and the Court found the time charged to be reasonable, citing the importance of reviewing depositions in order to prepare for trial.

Next, the Court considered whether the amount of hours billed by Jones’ other attorneys was reasonable. Specifically, Jones sought compensation for 201.3 hours of services provided by Sands Anderson PC, which had already been reduced by the firm from the original total of 262.7 hours due to possibly duplicative charges. The defendants still contested the new total, arguing that “nearly every time entry has been improperly ‘block billed.’” The Court agreed and applied a 10% across-the-board reduction to account for the improperly block billed entries.

Finally, the Court evaluated the distribution of fees. The analysis began by recognizing that all three defendants were “liable on a single count of unlawful retaliation in violation of 18 U.S.C. §1514A.” Additionally, Jones’ termination of employment was considered a single injury incurred by all of the defendants’ actions. Therefore, the Court finds it appropriate to award attorneys’ fees jointly and severally.

Implications for Legal Billing: Attorneys are obligated to exercise care and judgment when billing their clients, and to provide an efficient and clear billing record that allows the client to understand each service and cost provided. Block billing makes it difficult to ascertain how much time was spent on each individual task, which is key in determining an award for legal fees. This case emphasizes that even where an attorney has already voluntarily reduced their fees due to other billing concerns, block billing alone may cause a court to make significant across the board reductions.