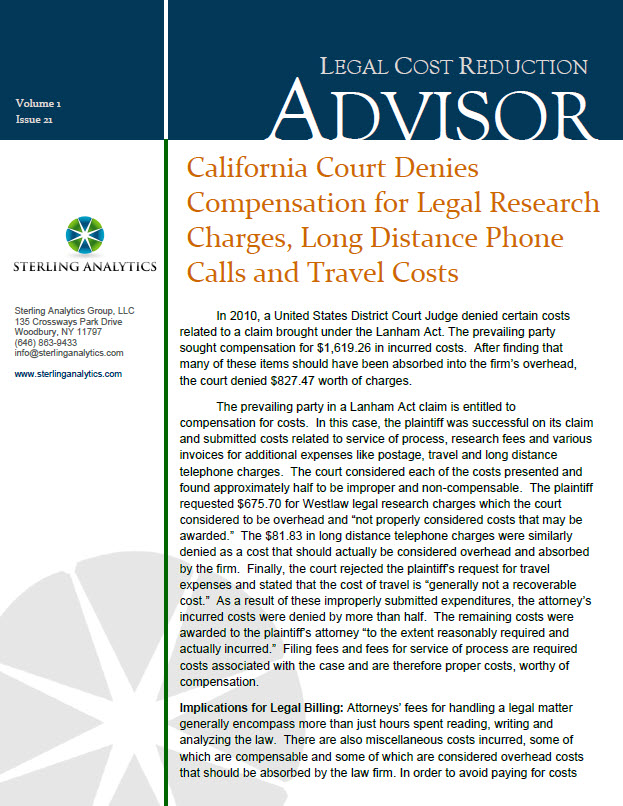 In 2010, a United States District Court Judge denied certain costs related to a claim brought under the Lanham Act. The prevailing party sought compensation for $1,619.26 in incurred costs. After finding that many of these items should have been absorbed into the firm’s overhead, the court denied $827.47 worth of charges.

The prevailing party in a Lanham Act claim is entitled to compensation for costs. In this case, the plaintiff was successful on its claim and submitted costs related to service of process, research fees and various invoices for additional expenses like postage, travel and long distance telephone charges. The court considered each of the costs presented and found approximately half to be improper and non-compensable. The plaintiff requested $675.70 for Westlaw legal research charges which the court considered to be overhead and “not properly considered costs that may be awarded.” The $81.83 in long distance telephone charges were similarly denied as a cost that should actually be considered overhead and absorbed by the firm. Finally, the court rejected the plaintiff’s request for travel expenses and stated that the cost of travel is “generally not a recoverable cost.” As a result of these improperly submitted expenditures, the attorney’s incurred costs were denied by more than half. The remaining costs were awarded to the plaintiff’s attorney “to the extent reasonably required and actually incurred.” Filing fees and fees for service of process are required costs associated with the case and are therefore proper costs, worthy of compensation.

Implications for Legal Billing: Attorneys’ fees for handling a legal matter generally encompass more than just hours spent reading, writing and analyzing the law. There are also miscellaneous costs incurred, some of which are compensable and some of which are considered overhead costs that should be absorbed by the law firm. In order to avoid paying for costs incurred by a retained firm that are considered overhead costs, a client should implement specific guidelines that itemize those costs that are properly reimbursable and those that are considered overhead and non-compensable. As stated by the court in the above case, legal research charges, long distance telephone calls and travel expenses are examples of overhead charges that should not be passed on to a client. The court also highlights those expenses that are properly included as reimbursable costs, such as filing fees, delivery of documents to the court and service of process fees. Since these items are necessary to the underlying case, their cost can be ethically passed along to a client. Guidelines that enumerate compensable costs and non-compensable overhead items will help determine the costs for which a client is ultimately responsible.