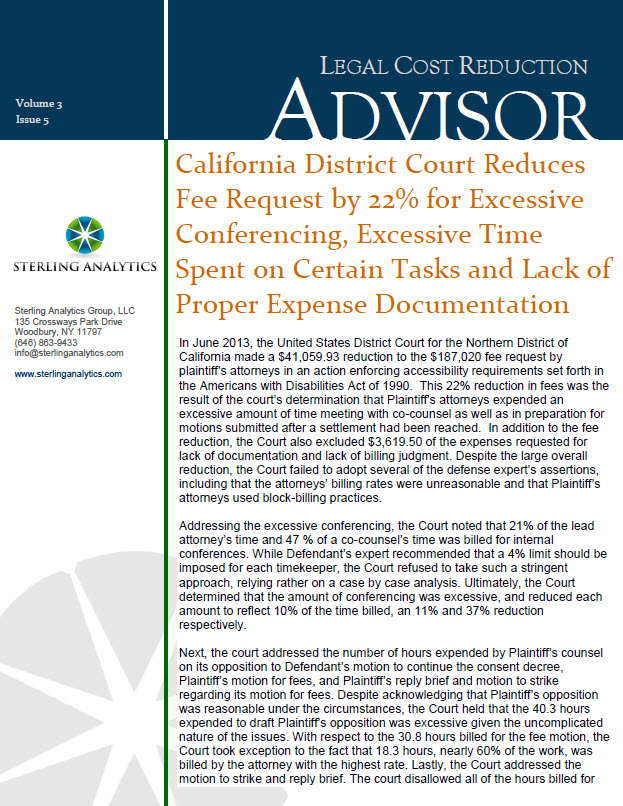 In June 2013, the United States District Court for the Northern District of California made a $41,059.93 reduction to the $187,020 fee request by plaintiff’s attorneys in an action enforcing accessibility requirements set forth in the Americans with Disabilities Act of 1990. This 22% reduction in fees was the result of the court’s determination that Plaintiff’s attorneys expended an excessive amount of time meeting with co-counsel as well as in preparation for motions submitted after a settlement had been reached. In addition to the fee reduction, the Court also excluded $3,619.50 of the expenses requested for lack of documentation and lack of billing judgment. Despite the large overall reduction, the Court failed to adopt several of the defense expert’s assertions, including that the attorneys’ billing rates were unreasonable and that Plaintiff’s attorneys used block-billing practices.

Addressing the excessive conferencing, the Court noted that 21% of the lead attorney’s time and 47 % of a co-counsel’s time was billed for internal conferences. While Defendant’s expert recommended that a 4% limit should be imposed for each timekeeper, the Court refused to take such a stringent approach, relying rather on a case by case analysis. Ultimately, the Court determined that the amount of conferencing was excessive, and reduced each amount to reflect 10% of the time billed, an 11% and 37% reduction respectively.

Next, the court addressed the number of hours expended by Plaintiff’s counsel on its opposition to Defendant’s motion to continue the consent decree, Plaintiff’s motion for fees, and Plaintiff’s reply brief and motion to strike regarding its motion for fees. Despite acknowledging that Plaintiff’s opposition was reasonable under the circumstances, the Court held that the 40.3 hours expended to draft Plaintiff’s opposition was excessive given the uncomplicated nature of the issues. With respect to the 30.8 hours billed for the fee motion, the Court took exception to the fact that 18.3 hours, nearly 60% of the work, was billed by the attorney with the highest rate. Lastly, the Court addressed the motion to strike and reply brief. The court disallowed all of the hours billed for the motion to strike the Defendant’s fee expert because it failed to comply with the court rules. In addition, the court found the 23.9 hours expended on the reply brief to be excessive in light of the issues raised and counsel’s experience even though counsel had already reduced the amount sought by 10% as an exercise of billing judgment. For all of the hours billed on the three motions above, the Court reduced the fees requested by 50% to reflect the excessive time spent on the tasks.

Finally, the court addressed expenses submitted in relation to the case. Noting a distinct lack of documentation to support either the per-item cost or the end-product of the copying and researching expenses, the Court declined to allow recovery in any amount, a reduction of $1,431.18 and $1,286.69 respectively. Furthermore, the Court disallowed several miscellaneous expenses, including local travel, due to the fact that Plaintiff’s attorneys could not cite any authority indicating that these expenses were reasonable.

Implications for Legal Billing: This decision highlights that attorneys must observe billing judgment and work to minimize the time expended when faced with familiar issues. Whether a case requires significant work subsequent to settlement is case-specific, but prevailing counsel that does not effectively monitor its hours throughout the process risks facing large reductions for inefficient work.
Finally, the decision demonstrates that it is unreasonable to seek recovery for expenses that are either unsupported by documentation or not reasonably recoverable under common law. The costs related to litigation should be reasonably necessary and well documented in order to be recoverable.