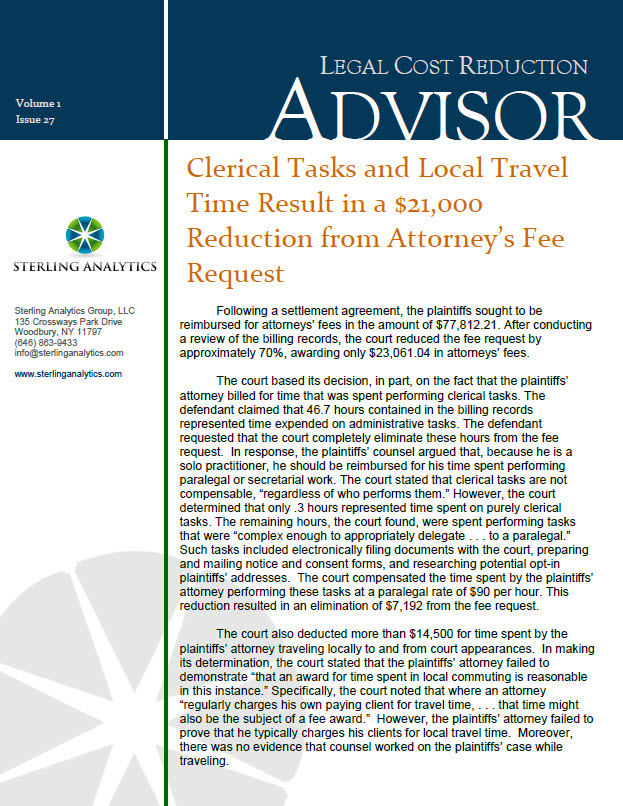 Following a settlement agreement, the plaintiffs sought to be reimbursed for attorneys’ fees in the amount of $77,812.21. After conducting a review of the billing records, the court reduced the fee request by approximately 70%, awarding only $23,061.04 in attorneys’ fees.

The court based its decision, in part, on the fact that the plaintiffs’ attorney billed for time that was spent performing clerical tasks. The defendant claimed that 46.7 hours contained in the billing records represented time expended on administrative tasks. The defendant requested that the court completely eliminate these hours from the fee request. In response, the plaintiffs’ counsel argued that, because he is a solo practitioner, he should be reimbursed for his time spent performing paralegal or secretarial work. The court stated that clerical tasks are not compensable, “regardless of who performs them.” However, the court determined that only .3 hours represented time spent on purely clerical tasks. The remaining hours, the court found, were spent performing tasks that were “complex enough to appropriately delegate . . . to a paralegal.” Such tasks included electronically filing documents with the court, preparing and mailing notice and consent forms, and researching potential opt-in plaintiffs’ addresses. The court compensated the time spent by the plaintiffs’ attorney performing these tasks at a paralegal rate of $90 per hour. This reduction resulted in an elimination of $7,192 from the fee request.

With respect to travel time, the court decided that reimbursement for local travel time was not reasonable under the circumstances of this case. The court based its decision primarily on the fact that the plaintiffs’ attorney did not regularly charge his clients for local travel time. However, many courts have found that a 50% reduction in travel time is reasonable. On the other hand, some courts have allowed complete reimbursement where an attorney performs work while traveling, provided that the attorney is performing the work for the client he or she is traveling for. Nonetheless, travel time may only be reimbursed where it is reasonable. Finding that the time spent traveling was unreasonable in this case, the court appropriately determined to exclude that time.