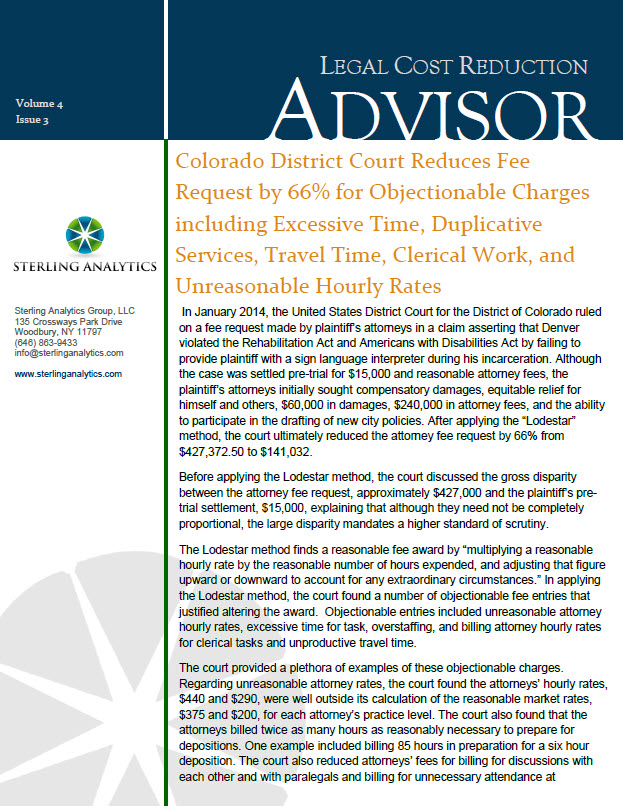 In January 2014, the United States District Court for the District of Colorado ruled on a fee request made by plaintiff’s attorneys in a claim asserting that Denver violated the Rehabilitation Act and Americans with Disabilities Act by failing to provide plaintiff with a sign language interpreter during his incarceration. Although the case was settled pre-trial for $15,000 and reasonable attorney fees, the plaintiff’s attorneys initially sought compensatory damages, equitable relief for himself and others, $60,000 in damages, $240,000 in attorney fees, and the ability to participate in the drafting of new city policies. After applying the “Lodestar” method, the court ultimately reduced the attorney fee request by 66% from $427,372.50 to $141,032.

Before applying the Lodestar method, the court discussed the gross disparity between the attorney fee request, approximately $427,000 and the plaintiff’s pre-trial settlement, $15,000, explaining that although they need not be completely proportional, the large disparity mandates a higher standard of scrutiny.

The Lodestar method finds a reasonable fee award by “multiplying a reasonable hourly rate by the reasonable number of hours expended, and adjusting that figure upward or downward to account for any extraordinary circumstances.” In applying the Lodestar method, the court found a number of objectionable fee entries that justified altering the award. Objectionable entries included unreasonable attorney hourly rates, excessive time for task, overstaffing, and billing attorney hourly rates for clerical tasks and unproductive travel time.

The court provided a plethora of examples of these objectionable charges. Regarding unreasonable attorney rates, the court found the attorneys’ hourly rates, $440 and $290, were well outside its calculation of the reasonable market rates, $375 and $200, for each attorney’s practice level. The court also found that the attorneys billed twice as many hours as reasonably necessary to prepare for depositions. One example included billing 85 hours in preparation for a six hour deposition. The court also reduced attorneys’ fees for billing for discussions with each other and with paralegals and billing for unnecessary attendance at depositions for which only one attorney had prepared. The court also refused to compensate attorneys for time spent on “tactical decisions” that had unclear significance to the action. Finally, the court reduced the fee award when the attorneys’ billed their hourly rate for unproductive travel time and for clerical tasks including “several hours relating to preparation of a ‘video outreach letter to potential witnesses,’ including recording the video, posting it to You Tube, and burning 90 DVDs.”

Finally, in determining the extent of the award reduction, the court also considered the plaintiff’s attorneys’ obtainment of “fairly little in return for his enormous expenditure of attorney fees,” observing that the attorneys’ fees would have been substantially less had they initially limited their scope to collecting the $15,000 settlement instead of seeking and failing to attain multiple other forms of relief.

Implications for Legal Billing: This case identifies many common objectionable charges that may be excluded from a fee award via the application of the Lodestar method. Here, the objectionable charges include unreasonable hourly rates, excessive time for task, overstaffing, and billing attorney rates for clerical tasks and unproductive travel time and resulted in a 66% reduction in the fee award.

The severity of this reduction indicates that courts may adopt heightened scrutiny when a large discrepancy exists between a settlement amount and a fee request. Additionally, this case highlights the fact that courts may take into account the overall success of the claim when adjusting a fee award via the Lodestar method.

*Scott v. City and County of Denver, 2014 WL 287558 (D. Col. 2014). Full copies of court decisions may be available through counsel or through various internet or paid services.