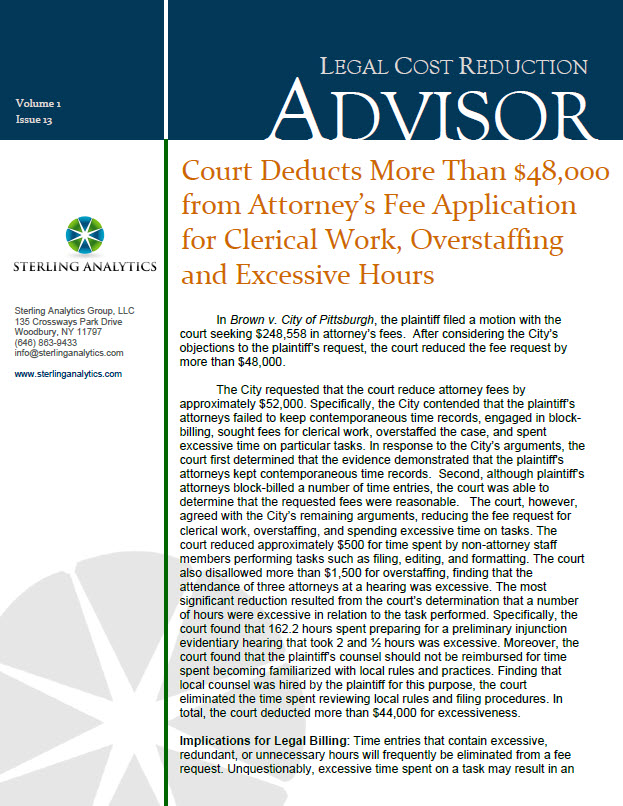 In Brown v. City of Pittsburgh, the plaintiff filed a motion with the court seeking $248,558 in attorney’s fees. After considering the City’s objections to the plaintiff’s request, the court reduced the fee request by more than $48,000.

The City requested that the court reduce attorney fees by approximately $52,000. Specifically, the City contended that the plaintiff’s attorneys failed to keep contemporaneous time records, engaged in block-billing, sought fees for clerical work, overstaffed the case, and spent excessive time on particular tasks. In response to the City’s arguments, the court first determined that the evidence demonstrated that the plaintiff’s attorneys kept contemporaneous time records. Second, although plaintiff’s attorneys block-billed a number of time entries, the court was able to determine that the requested fees were reasonable. The court, however, agreed with the City’s remaining arguments, reducing the fee request for clerical work, overstaffing, and spending excessive time on tasks. The court reduced approximately $500 for time spent by non-attorney staff members performing tasks such as filing, editing, and formatting. The court also disallowed more than $1,500 for overstaffing, finding that the attendance of three attorneys at a hearing was excessive. The most significant reduction resulted from the court’s determination that a number of hours were excessive in relation to the task performed. Specifically, the court found that 162.2 hours spent preparing for a preliminary injunction evidentiary hearing that took 2 and ½ hours was excessive. Moreover, the court found that the plaintiff’s counsel should not be reimbursed for time spent becoming familiarized with local rules and practices. Finding that local counsel was hired by the plaintiff for this purpose, the court eliminated the time spent reviewing local rules and filing procedures. In total, the court deducted more than $44,000 for excessiveness.

Implications for Legal Billing: Time entries that contain excessive, redundant, or unnecessary hours will frequently be eliminated from a fee request. Unquestionably, excessive time spent on a task may result in an unreasonable fee. When an attorney spends an unreasonable amount of time on a task, he or she is required to exercise billing judgment and reduce the time to reflect a more appropriate fee. This is true even where an inexperienced attorney is performing the work. Although an inexperienced attorney may take more time to perform a particular task, the time spent must be reduced to a reasonable fee. Moreover, an experienced attorney cannot “demand a high hourly rate, which is based on his or her . . . familiarity with the law, and then run up an inordinate amount of time researching the same law.” Additional factors that a court will look at in determining excessiveness include the complexity of the issues involved in the case, whether the task was absolutely

necessary to the case, and whether the issues in the case have been previously researched by counsel in a prior case. Furthermore, a court may even consider the length of a document to determine whether the amount of time spent researching for and drafting the document was reasonable. It is essential to evaluate billing records to ensure that the fee charged by an attorney is reasonable in relation to the work performed. As demonstrated by this decision, a significant amount of money can be saved by eliminating excessive, redundant, and unnecessary time.