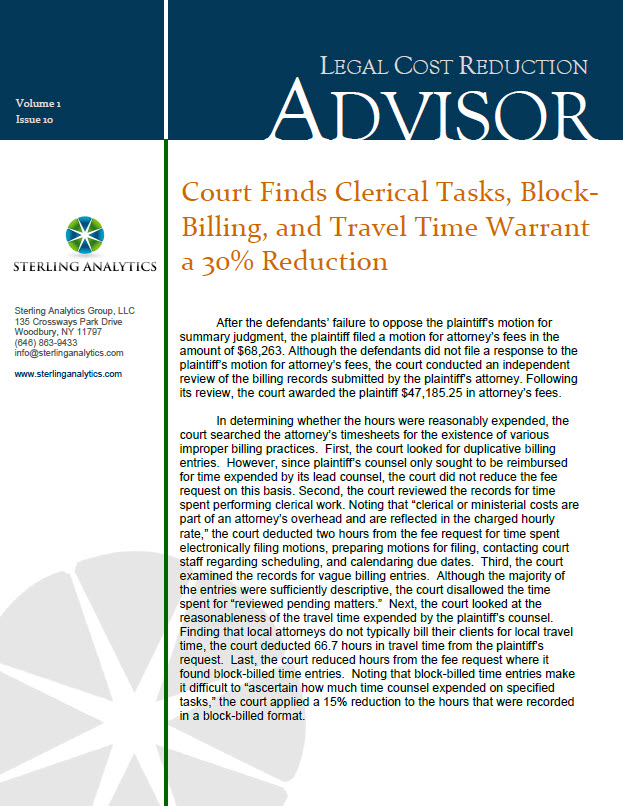 In determining whether the hours were reasonably expended, the court searched the attorney’s timesheets for the existence of various improper billing practices. First, the court looked for duplicative billing entries. However, since plaintiff’s counsel only sought to be reimbursed for time expended by its lead counsel, the court did not reduce the fee request on this basis. Second, the court reviewed the records for time spent performing clerical work. Noting that “clerical or ministerial costs are part of an attorney’s overhead and are reflected in the charged hourly rate,” the court deducted two hours from the fee request for time spent electronically filing motions, preparing motions for filing, contacting court staff regarding scheduling, and calendaring due dates. Third, the court examined the records for vague billing entries. Although the majority of the entries were sufficiently descriptive, the court disallowed the time spent for “reviewed pending matters.” Next, the court looked at the reasonableness of the travel time expended by the plaintiff’s counsel. Finding that local attorneys do not typically bill their clients for local travel time, the court deducted 66.7 hours in travel time from the plaintiff’s request. Last, the court reduced hours from the fee request where it found block-billed time entries. Noting that block-billed time entries make it difficult to “ascertain how much time counsel expended on specified tasks,” the court applied a 15% reduction to the hours that were recorded in a block-billed format.

Implications for Legal Billing: Implications for Legal Billing: Tasks that are typically performed by clerical or secretarial staff are generally non-compensable. The time spent on clerical tasks is included in an attorney’s overhead cost. Many tasks fall into this category. To name a few, scheduling, communicating with the court, clients, and other counsel regarding scheduling and deadlines, filing documents with the court, and reviewing court generated notices are clerical in nature and not compensable.