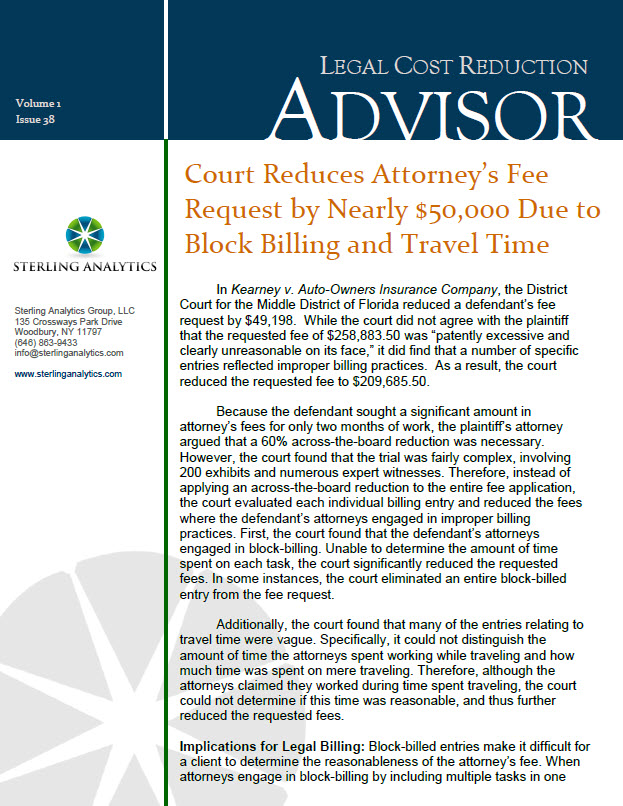 In Kearney v. Auto-Owners Insurance Company, the District Court for the Middle District of Florida reduced a defendant’s fee request by $49,198. While the court did not agree with the plaintiff that the requested fee of $258,883.50 was “patently excessive and clearly unreasonable on its face,” it did find that a number of specific entries reflected improper billing practices. As a result, the court reduced the requested fee to $209,685.50.

Because the defendant sought a significant amount in attorney’s fees for only two months of work, the plaintiff’s attorney argued that a 60% across-the-board reduction was necessary. However, the court found that the trial was fairly complex, involving 200 exhibits and numerous expert witnesses. Therefore, instead of applying an across-the-board reduction to the entire fee application, the court evaluated each individual billing entry and reduced the fees where the defendant’s attorneys engaged in improper billing practices. First, the court found that the defendant’s attorneys engaged in block-billing. Unable to determine the amount of time spent on each task, the court significantly reduced the requested fees. In some instances, the court eliminated an entire block-billed entry from the fee request.

Additionally, the court found that many of the entries relating to travel time were vague. Specifically, it could not distinguish the amount of time the attorneys spent working while traveling and how much time was spent on mere traveling. Therefore, although the attorneys claimed they worked during time spent traveling, the court could not determine if this time was reasonable, and thus further reduced the requested fees.

Implications for Legal Billing: Block-billed entries make it difficult for a client to determine the reasonableness of the attorney’s fee. When attorneys engage in block-billing by including multiple tasks in one time entry, it is nearly impossible to determine the amount of time spent on each separate task. “While attorneys cannot be expected to account for every second of their time, they should be expected to explain in discrete entries the nature of the work that they want a client . . . to pay them hundreds of dollars to perform.”

Furthermore, the court seems to be indicating that, if an attorney bills for time spent performing tasks while traveling, the billing entries should state both the time spent working as well as the time spent traveling. Without this information, it is difficult to determine whether the time expended by the attorney was reasonable. As the court noted, “[e]ven the most industrious attorney cannot work the entire time while traveling.” An attorney flying between cities “would need to put down his papers while driving, boarding a flight, and walking through airport security.”