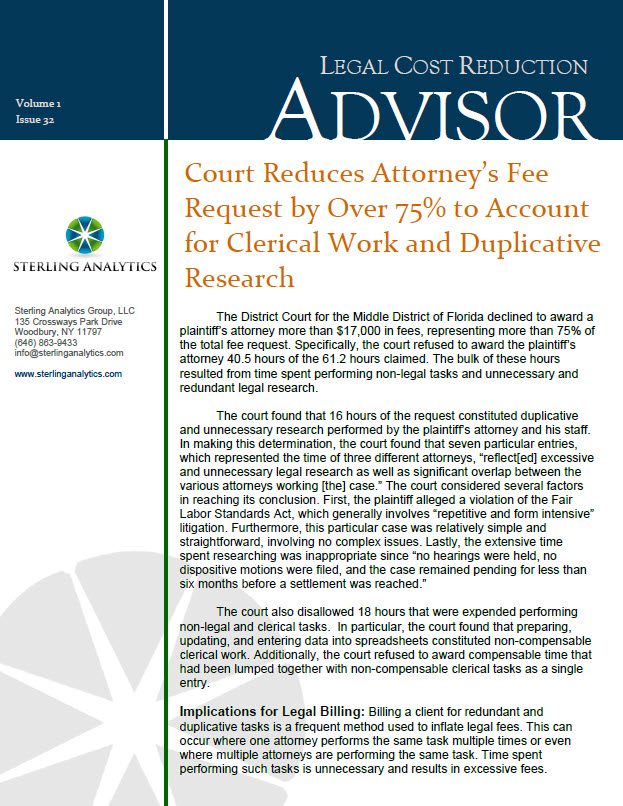 The District Court for the Middle District of Florida declined to award a plaintiff’s attorney more than $17,000 in fees, representing more than 75% of the total fee request. Specifically, the court refused to award the plaintiff’s attorney 40.5 hours of the 61.2 hours claimed. The bulk of these hours resulted from time spent performing non-legal tasks and unnecessary and redundant legal research.

The court found that 16 hours of the request constituted duplicative and unnecessary research performed by the plaintiff’s attorney and his staff. In making this determination, the court found that seven particular entries, which represented the time of three different attorneys, “reflect[ed] excessive and unnecessary legal research as well as significant overlap between the various attorneys working [the] case.” The court considered several factors in reaching its conclusion. First, the plaintiff alleged a violation of the Fair Labor Standards Act, which generally involves “repetitive and form intensive” litigation. Furthermore, this particular case was relatively simple and straightforward, involving no complex issues. Lastly, the extensive time spent researching was inappropriate since “no hearings were held, no dispositive motions were filed, and the case remained pending for less than six months before a settlement was reached.”

Implications for Legal Billing: Billing a client for redundant and duplicative tasks is a frequent method used to inflate legal fees. This can occur where one attorney performs the same task multiple times or even where multiple attorneys are performing the same task. Time spent performing such tasks is unnecessary and results in excessive fees.

As also indicated by this decision, attorneys should not be compensated for time performing non-legal tasks, such as entering data into spreadsheets. This type of work does not justify a paralegal’s or attorney’s hourly rate. Clerical work should be included in an attorney’s overhead and should never be the client’s burden. This is true even where it is an attorney performing the non-legal or clerical work.