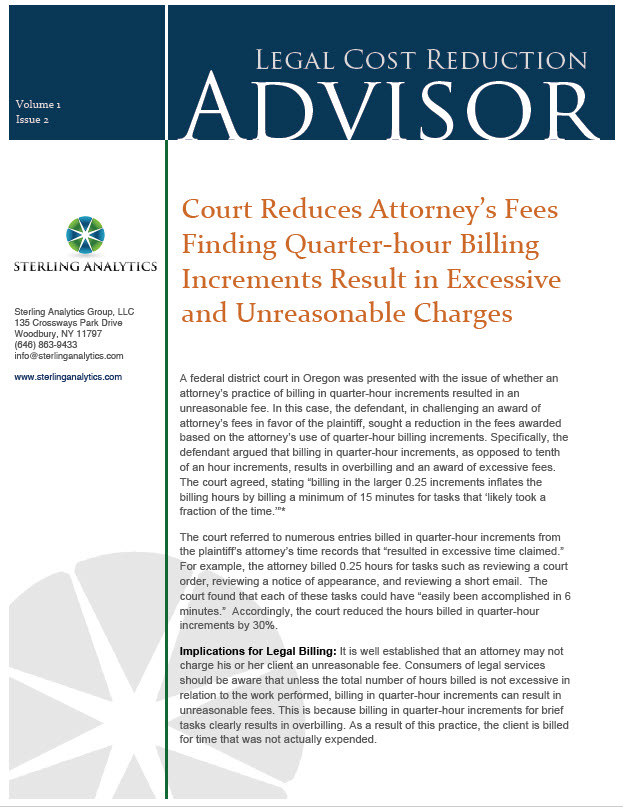 The court referred to numerous entries billed in quarter-hour increments from the plaintiff’s attorney’s time records that “resulted in excessive time claimed.” For example, the attorney billed 0.25 hours for tasks such as reviewing a court order, reviewing a notice of appearance, and reviewing a short email. The court found that each of these tasks could have “easily been accomplished in 6 minutes.” Accordingly, the court reduced the hours billed in quarter-hour increments by 30%.

Implications for Legal Billing: It is well established that an attorney may not charge his or her client an unreasonable fee. Consumers of legal services should be aware that unless the total number of hours billed is not excessive in relation to the work performed, billing in quarter-hour increments can result in unreasonable fees. This is because billing in quarter-hour increments for brief tasks clearly results in overbilling. As a result of this practice, the client is billed for time that was not actually expended.

When utilizing any minimum billing increment, it is inevitable that some overbilling will result. Consumers of legal services should recognize this problem and require use of the more accurate .10 billing increments, as well as be vigilant about frequently auditing attorney bills.

Most retainer agreements state the billing increment at which the client will be billed. Consumers of legal services should take notice of this provision in their agreements with legal counsel and should not ignore the significant difference between .10 and .25 billing increments. The difference can amount to a considerable sum of money, especially at large corporations that spend hundreds of thousands or even millions of dollars in legal services every year.