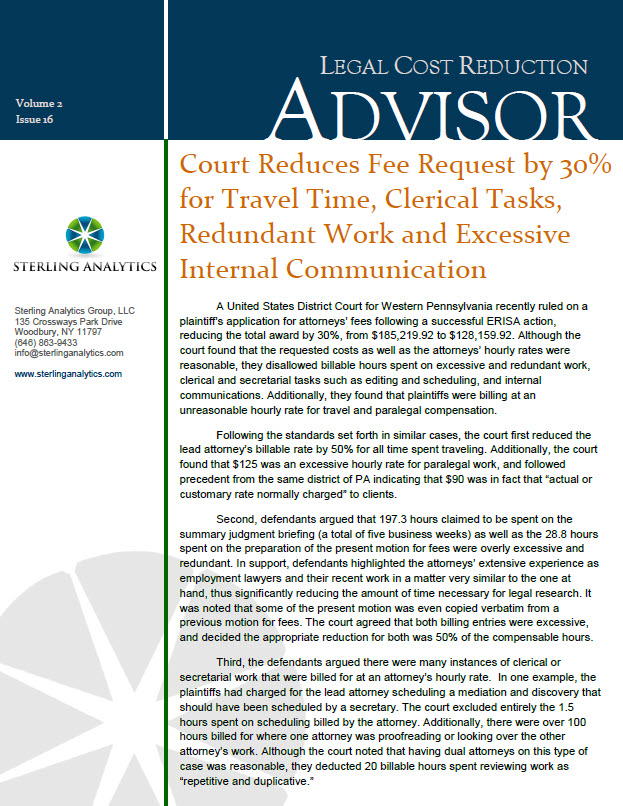 A United States District Court for Western Pennsylvania recently ruled on a plaintiff’s application for attorneys’ fees following a successful ERISA action, reducing the total award by 30%, from $185,219.92 to $128,159.92. Although the court found that the requested costs as well as the attorneys’ hourly rates were reasonable, they disallowed billable hours spent on excessive and redundant work, clerical and secretarial tasks such as editing and scheduling, and internal communications. Additionally, they found that plaintiffs were billing at an unreasonable hourly rate for travel and paralegal compensation.

Following the standards set forth in similar cases, the court first reduced the lead attorney’s billable rate by 50% for all time spent traveling. Additionally, the court found that $125 was an excessive hourly rate for paralegal work, and followed precedent from the same district of PA indicating that $90 was in fact that “actual or customary rate normally charged” to clients.

Second, defendants argued that 197.3 hours claimed to be spent on the summary judgment briefing (a total of five business weeks) as well as the 28.8 hours spent on the preparation of the present motion for fees were overly excessive and redundant. In support, defendants highlighted the attorneys’ extensive experience as employment lawyers and their recent work in a matter very similar to the one at hand, thus significantly reducing the amount of time necessary for legal research. It was noted that some of the present motion was even copied verbatim from a previous motion for fees. The court agreed that both billing entries were excessive, and decided the appropriate reduction for both was 50% of the compensable hours.

Third, the defendants argued there were many instances of clerical or secretarial work that were billed for at an attorney’s hourly rate. In one example, the plaintiffs had charged for the lead attorney scheduling a mediation and discovery that should have been scheduled by a secretary. The court excluded entirely the 1.5 hours spent on scheduling billed by the attorney. Additionally, there were over 100 hours billed for where one attorney was proofreading or looking over the other attorney’s work. Although the court noted that having dual attorneys on this type of case was reasonable, they deducted 20 billable hours spent reviewing work as “repetitive and duplicative.”

Last, the court reduced the total hours spent on internal communications, such as email and conferencing, by 50% for each attorney, finding that almost 50 hours spent on such tasks was unreasonable. The end result was a total reduction in the lodestar amount of $57,060.00, before costs and interest.

Implications for Legal Billing: This case reaffirms the principle that courts will review the time charged for certain tasks in plaintiff’s fee petitions line by line and have the power to exclude any hours that they find to be “excessive, redundant, or otherwise unnecessary.” The reasonableness of hourly rates for attorneys and paralegals will be calculated based on prevailing market rates in the forum of litigation, as well as the relative experience of the attorneys. The party seeking fees has the burden of providing affidavits regarding the “actual or customary rate” normally charged.

It is a general rule that an attorney may not charge their client for clerical or secretarial work as such work is considered to be subsumed in the firm’s overhead costs and reflected in an attorney’s hourly rate. This case extends secretarial work to include time spent by one attorney proofreading and reviewing another attorney’s work. Time spent scheduling motion hearings and depositions may not be billed at an hourly rate; to do so would be a clear violation of ethical guidelines.

In addition, an attorney is expected to reflect a reduction in time spent on a motion or brief if they have already done the research and work in a similar case when billing a client. If a court finds that an attorney charged for an excessive amount of time in light of their experience or ability to copy “substantively identical” work from a prior case, they will reduce the total number of billable hours that are recoverable by up to fifty percent.