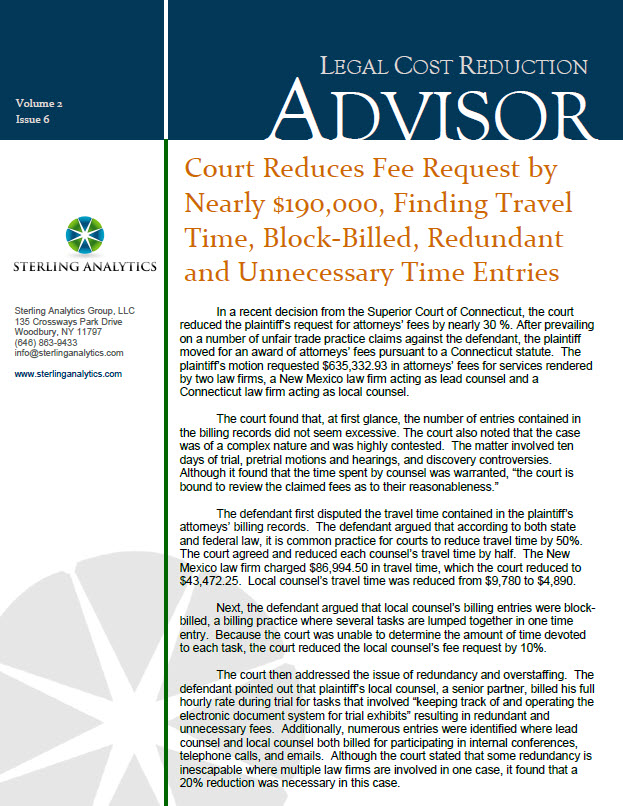 The court found that, at first glance, the number of entries contained in the billing records did not seem excessive. The court also noted that the case was of a complex nature and was highly contested. The matter involved ten days of trial, pretrial motions and hearings, and discovery controversies. Although it found that the time spent by counsel was warranted, “the court is bound to review the claimed fees as to their reasonableness.”

Next, the defendant argued that local counsel’s billing entries were block-billed, a billing practice where several tasks are lumped together in one time entry. Because the court was unable to determine the amount of time devoted to each task, the court reduced the local counsel’s fee request by 10%.

The court then addressed the issue of redundancy and overstaffing. The defendant pointed out that plaintiff’s local counsel, a senior partner, billed his full hourly rate during trial for tasks that involved “keeping track of and operating the electronic document system for trial exhibits” resulting in redundant and unnecessary fees. Additionally, numerous entries were identified where lead counsel and local counsel both billed for participating in internal conferences, telephone calls, and emails. Although the court stated that some redundancy is inescapable where multiple law firms are involved in one case, it found that a 20% reduction was necessary in this case.

Implications for Legal Billing: The court in this case found that a reduction in travel time by 50% was reasonable. This is consistent with many court decisions concerning travel time. Where an attorney is merely traveling and not performing legal services, he or she should not charge their full hourly rate. However, where an attorney performs legal services while traveling on behalf of a client, courts generally allow the attorney to charge his or her full hourly rate.

It is also common for courts to reduce a fee request where it appears that the staffing of multiple attorneys on the case resulted in duplication of work, redundancy, or overstaffing. In this case, the court found that internal conferences and emails between lead counsel and local counsel resulted in excessive and redundant billing. Moreover, the defendant argued that the senior partner’s task of maintaining the electronic document system during trial resulted in redundant and unnecessary fees. Not only did this task result in redundant fees, the task also seems overqualified for a senior partner charging his full hourly rate since it would typically be performed by a paralegal. If a paralegal was not available to attend the trial, the senior partner’s hourly rate should have been reduced to a paralegal’s hourly rate. However, the court applied a 20% reduction to these fees, which resulted in a significant decrease in the fees awarded to the plaintiff.