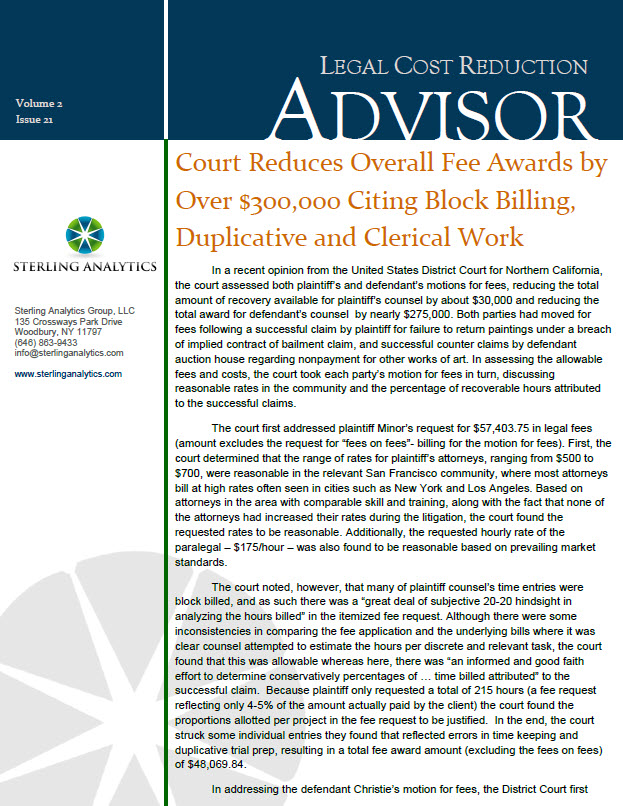 In a recent opinion from the United States District Court for Northern California, the court assessed both plaintiff’s and defendant’s motions for fees, reducing the total amount of recovery available for plaintiff’s counsel by about $30,000 and reducing the total award for defendant’s counsel by nearly $275,000. Both parties had moved for fees following a successful claim by plaintiff for failure to return paintings under a breach of implied contract of bailment claim, and successful counter claims by defendant auction house regarding nonpayment for other works of art. In assessing the allowable fees and costs, the court took each party’s motion for fees in turn, discussing reasonable rates in the community and the percentage of recoverable hours attributed to the successful claims.

The court first addressed plaintiff Minor’s request for $57,403.75 in legal fees (amount excludes the request for “fees on fees”- billing for the motion for fees). First, the court determined that the range of rates for plaintiff’s attorneys, ranging from $500 to $700, were reasonable in the relevant San Francisco community, where most attorneys bill at high rates often seen in cities such as New York and Los Angeles. Based on attorneys in the area with comparable skill and training, along with the fact that none of the attorneys had increased their rates during the litigation, the court found the requested rates to be reasonable. Additionally, the requested hourly rate of the paralegal – $175/hour – was also found to be reasonable based on prevailing market standards.

The court noted, however, that many of plaintiff counsel’s time entries were block billed, and as such there was a “great deal of subjective 20-20 hindsight in analyzing the hours billed” in the itemized fee request. Although there were some inconsistencies in comparing the fee application and the underlying bills where it was clear counsel attempted to estimate the hours per discrete and relevant task, the court found that this was allowable whereas here, there was “an informed and good faith effort to determine conservatively percentages of … time billed attributed” to the successful claim. Because plaintiff only requested a total of 215 hours (a fee request reflecting only 4-5% of the amount actually paid by the client) the court found the proportions allotted per project in the fee request to be justified. In the end, the court struck some individual entries they found that reflected errors in time keeping and duplicative trial prep, resulting in a total fee award amount (excluding the fees on fees) of $48,069.84.

In addressing the defendant Christie’s motion for fees, the District Court first discussed the unique use of a “blended” billing rate to reconcile the use of two different firms during the course of the litigation. Although defendants asserted a blended hourly billing rate of $535 an hour without asserting how they determined the reasonableness of the rate, the Court ultimately found it to be an acceptable average given the range of billing rates between partners and associates at the two firms – from $465 to $1,010 per hour. In their calculations, the court noted that had Christie’s billed by each attorney’s rate individually, the total requested amount would have been “more than 40% higher than the fees requested based on the blended rate.”

However, the court did take issue with some of the hourly rates of non-attorneys that were not blended and billed separately, such as a “legal technology project manager” and a “trial consultant” billing at rates exceeding $300/hour. These were found to be excessive and unreasonable given the lack of information regarding their expertise, and as such the rates were lowered to $200/hour.

In reviewing the defendant’s itemized fee request, the Court noted several instances of clerical work that should have been subsumed as overhead, specifically in entries for document production, organizing exhibits, and deposition preparation. “Arguably, a task such as ‘trial exhibit database updates and maintenance’ is purely clerical and should be absorbed by the attorney’s hourly rate.” Other tasks such as “review/code/input docs into electronic database” were similarly excluded as a “modern day version of filing documents,” stated the court. Ultimately, Christie’s was awarded $755,755.38 of the initially requested $1,000,650.87 in legal fees (excluding the fees on fees requested).

In addition, the court also noted that Christie’s had billed for several associates attending trial dates and depositions, reflecting duplicative work. They stated it was unnecessary for more than two associates to bill for attending trial, “in light of the fact that it appears Christie’s had several paralegal type assistants at trial to support the attorneys.” The court eliminated all billable hours by one of the associates for the entries related to attending trial – an amount of $12,437.

In assessing whether each side could charge for the preparation of cross-motions for Attorney’s Fees, the court found that fees on fees are warranted whereas here, “if fees on fees were not granted, then the fee application would eat into the ultimate fee award.” Fees were awarded to both sides for their work up to the date of the in-person hearing where both sides presented their motions, itemized bills, and supplemental briefs to the court.

Finally, the court turned to the taxable costs for both sides. As for Minor, the court reduced the requested costs amount of $26,514.48 to $16,859.63, finding that while counsel could bill for the costs of preparing charts, diagrams, videotapes and other visual aids, they could not include the costs of “renting equipment to present the visual aids.” Christie’s request for costs was reduced from $43,098.20 to $16,640, reflecting a reduction for the preparation of demonstrative graphics. The court found over 100 hours of billing entries for two trial consultants (billing at rates close to $400/hour) for vague entries such as “preparing graphics” and “preparing demonstratives.” The decision noted that these entries were not only excessive for the task at hand, but also duplicative with two trial consultants working on the same product. The court lowered the hourly rate of the consultants to $200/hour, and allowed only 50% of the total requested hours for this task to be awarded.

Implications for Legal Billing: The analysis of requested attorneys’ fees in this case demonstrates that duplicative work and excessive time spent on routine tasks will generally be disallowed. Where multiple trial consultants or paralegals are working on one task such as organizing exhibits or preparing visuals for aid at trial, a court can use its judgment to lower hourly rates and reduce hours as they find appropriate based on the difficulty of the task and resulting work product. In addition, where multiple associates bill for attending the same trial, especially in instances where paralegals are in attendance for assistance to counsel, the court may exclude those billable hours it finds to be redundant and duplicative.

The court in this decision also discussed on several instances that they would reduce the hourly rate for non-attorney assistance where there was no supporting evidence as to expertise of the individual or value of the work performed. When submitting fee applications, law firms employing consultants and project managers during litigation may be requested to prepare for the court detailed information regarding how these consultants supported general counsel, in order to aid the court in their analysis of the reasonableness of their hourly rates.