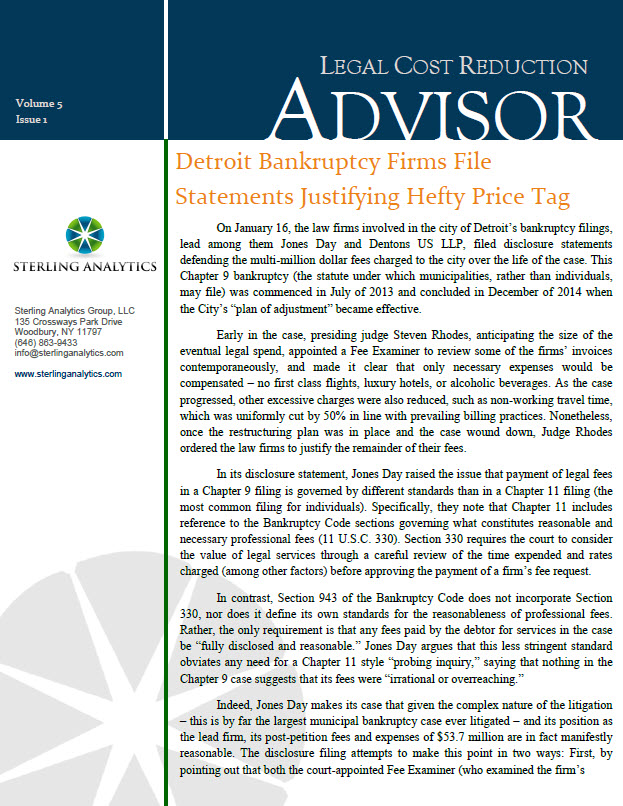 On January 16, the law firms involved in the city of Detroit’s bankruptcy filings, lead among them Jones Day and Dentons US LLP, filed disclosure statements defending the multi-million dollar fees charged to the city over the life of the case. This Chapter 9 bankruptcy (the statute under which municipalities, rather than individuals, may file) was commenced in July of 2013 and concluded in December of 2014 when the City’s “plan of adjustment” became effective.

Early in the case, presiding judge Steven Rhodes, anticipating the size of the eventual legal spend, appointed a Fee Examiner to review some of the firms’ invoices contemporaneously, and made it clear that only necessary expenses would be compensated – no first class flights, luxury hotels, or alcoholic beverages. As the case progressed, other excessive charges were also reduced, such as non-working travel time, which was uniformly cut by 50% in line with prevailing billing practices. Nonetheless, once the restructuring plan was in place and the case wound down, Judge Rhodes ordered the law firms to justify the remainder of their fees.

In its disclosure statement, Jones Day raised the issue that payment of legal fees in a Chapter 9 filing is governed by different standards than in a Chapter 11 filing (the most common filing for individuals). Specifically, they note that Chapter 11 includes reference to the Bankruptcy Code sections governing what constitutes reasonable and necessary professional fees (11 U.S.C. 330). Section 330 requires the court to consider the value of legal services through a careful review of the time expended and rates charged (among other factors) before approving the payment of a firm’s fee request.

In contrast, Section 943 of the Bankruptcy Code does not incorporate Section 330, nor does it define its own standards for the reasonableness of professional fees. Rather, the only requirement is that any fees paid by the debtor for services in the case be “fully disclosed and reasonable.” Jones Day argues that this less stringent standard obviates any need for a Chapter 11 style “probing inquiry,” saying that nothing in the Chapter 9 case suggests that its fees were “irrational or overreaching.”

Indeed, Jones Day makes its case that given the complex nature of the litigation – this is by far the largest municipal bankruptcy case ever litigated – and its position as the lead firm, its post-petition fees and expenses of $53.7 million are in fact manifestly reasonable. The disclosure filing attempts to make this point in two ways: First, by pointing out that both the court-appointed Fee Examiner (who examined the firm’s invoices under a Chapter 11 standard) and the City of Detroit itself had opportunity to comment on and request fee reductions of the invoices during the pendency of the litigation. In such a manner, the firm says that nearly one-quarter of their usual fees and expenses have already been reduced. Second, the firm points to its success in completing work on the bankruptcy filing in “record-setting time” (16 months) and gaining the city a favorable result in the face of resistance from “sophisticated and well financed creditors.” In contrast, prior (smaller) municipal bankruptcies have lasted as long as two to three years, and the legal fees incurred have exceeded Jones Day’s both in the total cost and in the percentage of the restructured debt that it represents.

Dentons US LLP and the other retained firms made similar arguments in their disclosure statements, essentially arguing that fee reductions made during the course of the litigation were considerable enough to preclude the necessity of any further post-petition review, and that their contributions to the case were significant – and successful – enough to justify the fees charged.

Judge Rhodes is expected to issue an order soon on whether the fees in question will be paid in full or further reduced.