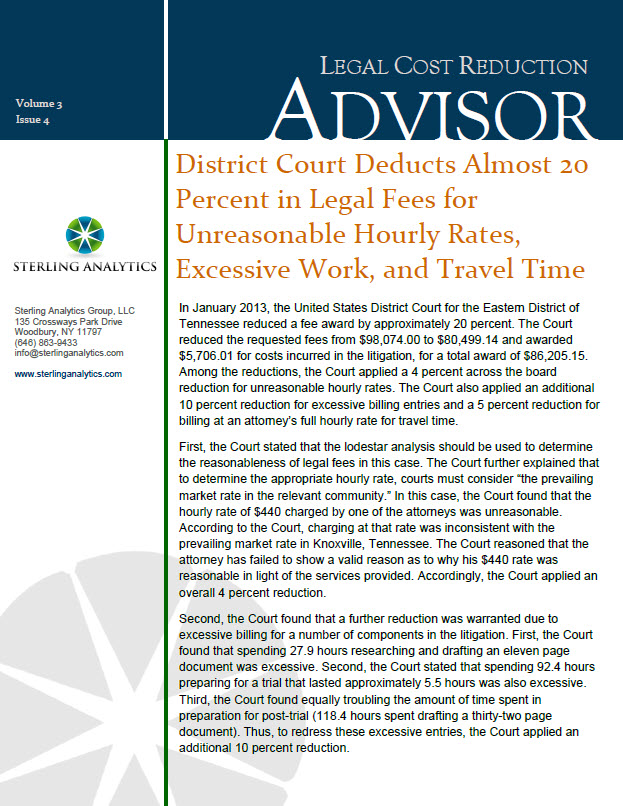 In January 2013, the United States District Court for the Eastern District of Tennessee reduced a fee award by approximately 20 percent. The Court reduced the requested fees from $98,074.00 to $80,499.14 and awarded $5,706.01 for costs incurred in the litigation, for a total award of $86,205.15. Among the reductions, the Court applied a 4 percent across the board reduction for unreasonable hourly rates. The Court also applied an additional 10 percent reduction for excessive billing entries and a 5 percent reduction for billing at an attorney’s full hourly rate for travel time.

First, the Court stated that the lodestar analysis should be used to determine the reasonableness of legal fees in this case. The Court further explained that to determine the appropriate hourly rate, courts must consider “the prevailing market rate in the relevant community.” In this case, the Court found that the hourly rate of $440 charged by one of the attorneys was unreasonable. According to the Court, charging at that rate was inconsistent with the prevailing market rate in Knoxville, Tennessee. The Court reasoned that the attorney has failed to show a valid reason as to why his $440 rate was reasonable in light of the services provided. Accordingly, the Court applied an overall 4 percent reduction.

Implications for Legal Billing: This case addresses a number of important billing issues. First, it illustrates the importance of charging reasonable hourly rates. Unless an exception applies, attorneys are expected to charge hourly rates that are consistent with the prevailing rates in the relevant market. Courts have full discretion to reduce hourly rates to an amount that they find reasonable.

In addition, this case also illustrates that courts have the discretion to make across the board reductions for time excessively spent on a task. To avoid these types of reductions, attorneys should use their billing judgment and voluntarily reduce legal fees where the time spent on any given task seems excessive in relation to the task performed.

Finally, the Court again emphasized that travel time should not be billed at an attorney’s full hourly rate. Attorneys should be aware that the prevailing standard is to bill half of their hourly rate, at most, for time spent traveling when no legal services are performed during travel.