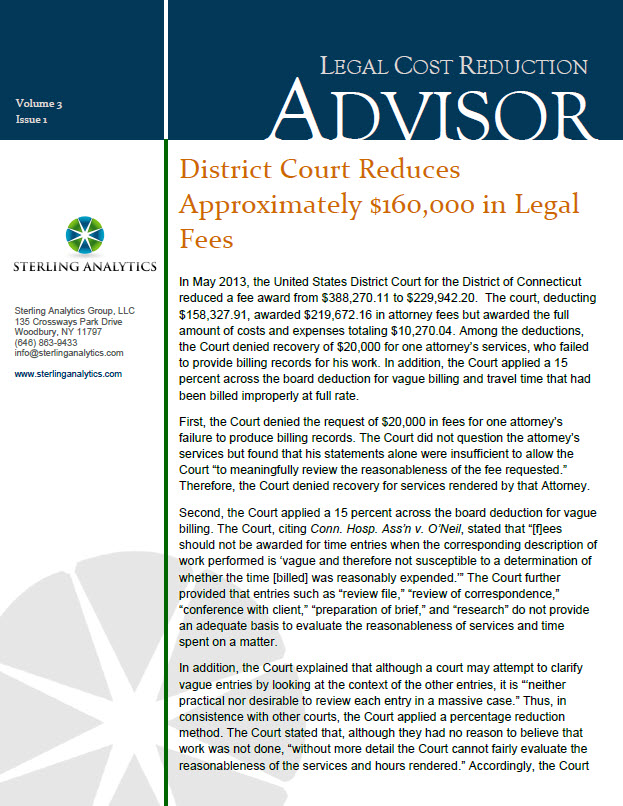 In May 2013, the United States District Court for the District of Connecticut reduced a fee award from $388,270.11 to $229,942.20. The court, deducting $158,327.91, awarded $219,672.16 in attorney fees but awarded the full amount of costs and expenses totaling $10,270.04. Among the deductions, the Court denied recovery of $20,000 for one attorney’s services, who failed to provide billing records for his work. In addition, the Court applied a 15 percent across the board deduction for vague billing and travel time that had been billed improperly at full rate.

First, the Court denied the request of $20,000 in fees for one attorney’s failure to produce billing records. The Court did not question the attorney’s services but found that his statements alone were insufficient to allow the Court “to meaningfully review the reasonableness of the fee requested.” Therefore, the Court denied recovery for services rendered by that Attorney.

Second, the Court applied a 15 percent across the board deduction for vague billing. The Court, citing Conn. Hosp. Ass’n v. O’Neil, stated that “[f]ees should not be awarded for time entries when the corresponding description of work performed is ‘vague and therefore not susceptible to a determination of whether the time [billed] was reasonably expended.’” The Court further provided that entries such as “review file,” “review of correspondence,” “conference with client,” “preparation of brief,” and “research” do not provide an adequate basis to evaluate the reasonableness of services and time spent on a matter.

In addition, the Court explained that although a court may attempt to clarify vague entries by looking at the context of the other entries, it is “‘neither practical nor desirable to review each entry in a massive case.” Thus, in consistence with other courts, the Court applied a percentage reduction method. The Court stated that, although they had no reason to believe that work was not done, “without more detail the Court cannot fairly evaluate the reasonableness of the services and hours rendered.” Accordingly, the Court found that a 15 percent reduction was warranted.

Finally, the Court agreed that travel time should not be billed at an attorney’s full hourly rate. Nevertheless, no further reductions for travel time were made because the Court found that the overall 15 percent deductions fairly accounted for the work reasonably completed by the attorneys.

Implications for Legal Billing: This case illustrates the importance of recording services and maintaining contemporaneous billing records. In the absence of billing records, the court has discretion to not only reduce the amount of legal fees but also deny an award altogether.

Moreover, this case also illustrates that courts have the discretion to, and often do, reduce legal fees when work cannot be identified with sufficient certainty. Specific billing entries allow clients and the court to determine whether charges fairly reflect the work described. Since Vague billing entries gives courts the discretion to apply an across the board percentage reduction, this further highlights the importance of billing services with specificity to avoid significant deductions.

Finally, the Court again reiterated that travel time should not be billed at an attorney’s full hourly rate. While no further deductions were taken in this case based on travel time, counsel should be cautioned to avoid billing their travel time at their full hourly rate, especially when no services are being performed during travel.