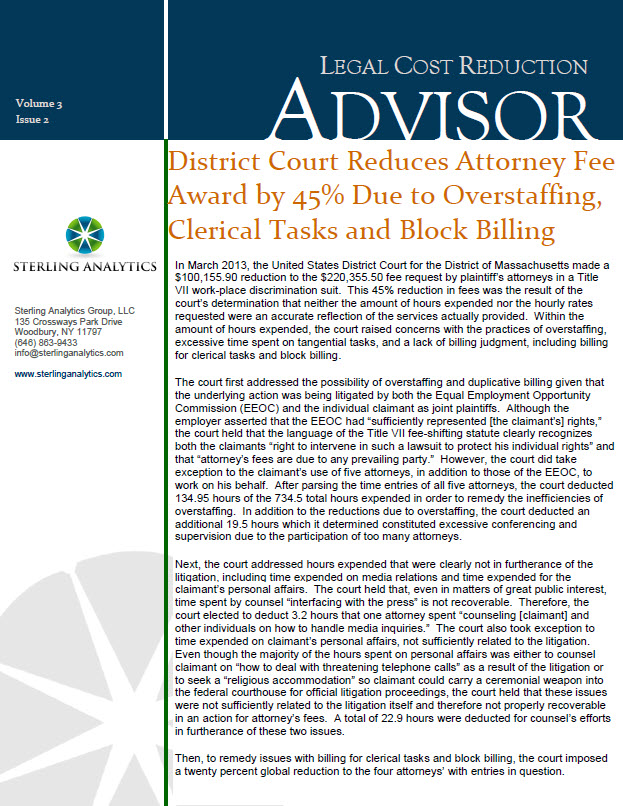 In March 2013, the United States District Court for the District of Massachusetts made a $100,155.90 reduction to the $220,355.50 fee request by plaintiff’s attorneys in a Title VII work-place discrimination suit. This 45% reduction in fees was the result of the court’s determination that neither the amount of hours expended nor the hourly rates requested were an accurate reflection of the services actually provided. Within the amount of hours expended, the court raised concerns with the practices of overstaffing, excessive time spent on tangential tasks, and a lack of billing judgment, including billing for clerical tasks and block billing.

The court first addressed the possibility of overstaffing and duplicative billing given that the underlying action was being litigated by both the Equal Employment Opportunity Commission (EEOC) and the individual claimant as joint plaintiffs. Although the employer asserted that the EEOC had “sufficiently represented [the claimant’s] rights,” the court held that the language of the Title VII fee-shifting statute clearly recognizes both the claimants “right to intervene in such a lawsuit to protect his individual rights” and that “attorney’s fees are due to any prevailing party.” However, the court did take exception to the claimant’s use of five attorneys, in addition to those of the EEOC, to work on his behalf. After parsing the time entries of all five attorneys, the court deducted 134.95 hours of the 734.5 total hours expended in order to remedy the inefficiencies of overstaffing. In addition to the reductions due to overstaffing, the court deducted an additional 19.5 hours which it determined constituted excessive conferencing and supervision due to the participation of too many attorneys.

Next, the court addressed hours expended that were clearly not in furtherance of the litigation, including time expended on media relations and time expended for the claimant’s personal affairs. The court held that, even in matters of great public interest, time spent by counsel “interfacing with the press” is not recoverable. Therefore, the court elected to deduct 3.2 hours that one attorney spent “counseling [claimant] and other individuals on how to handle media inquiries.” The court also took exception to time expended on claimant’s personal affairs, not sufficiently related to the litigation. Even though the majority of the hours spent on personal affairs was either to counsel claimant on “how to deal with threatening telephone calls” as a result of the litigation or to seek a “religious accommodation” so claimant could carry a ceremonial weapon into the federal courthouse for official litigation proceedings, the court held that these issues were not sufficiently related to the litigation itself and therefore not properly recoverable in an action for attorney’s fees. A total of 22.9 hours were deducted for counsel’s efforts in furtherance of these two issues.

Then, to remedy issues with billing for clerical tasks and block billing, the court imposed a twenty percent global reduction to the four attorneys’ with entries in question.

Finally, the court addressed the reasonableness of the rates requested by the two highest billing attorneys. The court determined that affidavits asserting that the attorney was of comparable skill and experience to large-firm commercial litigators were insufficient evidence to warrant the lead attorney’s requested rate for individual civil rights cases. The court also refused to accept the attorney’s argument that, despite insufficient documentation, his rate was still reasonable when compared to the Laffey Matrix—an annual rate schedule used by the US Attorney’s office for the District of Columbia—because evidence of reasonableness in comparison to rates in Washington, D.C. cannot be used as evidence of reasonableness in Boston, MA. Accordingly, the court reduced the lead attorney’s rate from $425 to $350, which still exceeded the rate awarded to the same attorney by the same court in a different civil rights matter.

In sum, the court awarded only 55% of the legal fees requested, along with the full amount of expenses requested, for a total of $120,199.60 in fees and $2,623.15 in costs for a case that settled for injunctive relief, $75,000 in monetary relief, and reasonable attorney’s fees.

Implications for Legal Billing: This decision highlights that attorneys must staff judiciously and work to eliminate inefficiencies created by the use of multiple attorneys. Whether a case requires the work of two or more attorneys is case-specific, but prevailing counsel that does not effectively monitor its hours throughout the process risks facing large reductions for inefficient work.
The court’s decision also highlights that it is unreasonable to seek recovery for affairs that are tangential or lack sufficient relation to the litigation itself. The time expended by attorneys should reasonably be in furtherance of the litigation at-hand.
Finally, the decision demonstrates that counsel should not bill for clerical tasks nor describe the time spent in blocks of time as opposed to billing each discrete task separately, as such practices may subject counsel’s time to a percentage global reduction, as was applied in this case.