District Court Reduces Attorneys’ Fee Request by Over $245,000 Due to the Use of Quarter-Hour Billing Increments and Vague Descriptions 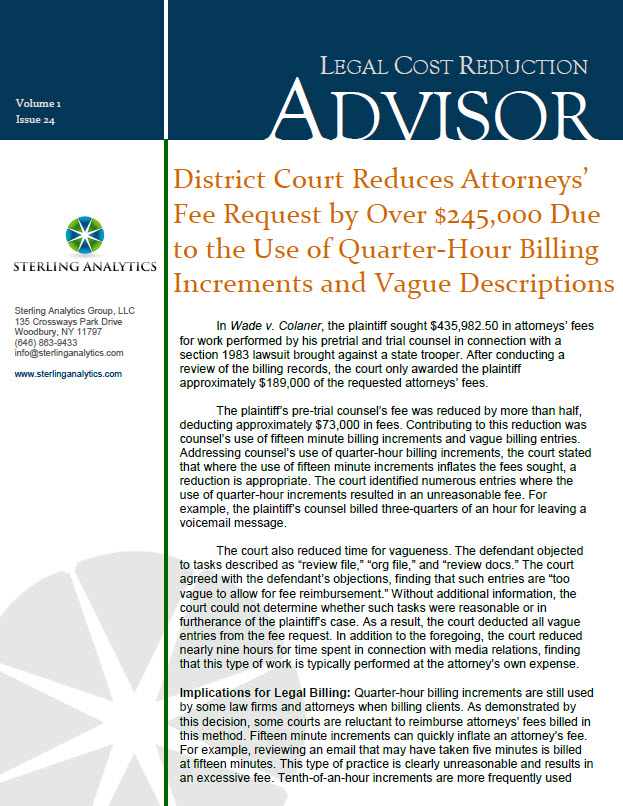 In Wade v. Colaner, the plaintiff sought $435,982.50 in attorneys’ fees for work performed by his pretrial and trial counsel in connection with a section 1983 lawsuit brought against a state trooper. After conducting a review of the billing records, the court only awarded the plaintiff approximately $189,000 of the requested attorneys’ fees.

The plaintiff’s pre-trial counsel’s fee was reduced by more than half, deducting approximately $73,000 in fees. Contributing to this reduction was counsel’s use of fifteen minute billing increments and vague billing entries. Addressing counsel’s use of quarter-hour billing increments, the court stated that where the use of fifteen minute increments inflates the fees sought, a reduction is appropriate. The court identified numerous entries where the use of quarter-hour increments resulted in an unreasonable fee. For example, the plaintiff’s counsel billed three-quarters of an hour for leaving a voicemail message.

The court also reduced time for vagueness. The defendant objected to tasks described as “review file,” “org file,” and “review docs.” The court agreed with the defendant’s objections, finding that such entries are “too vague to allow for fee reimbursement.” Without additional information, the court could not determine whether such tasks were reasonable or in furtherance of the plaintiff’s case. As a result, the court deducted all vague entries from the fee request. In addition to the foregoing, the court reduced nearly nine hours for time spent in connection with media relations, finding that this type of work is typically performed at the attorney’s own expense.

﻿Implications for Legal Billing: Quarter-hour billing increments are still used by some law firms and attorneys when billing clients. As demonstrated by this decision, some courts are reluctant to reimburse attorneys’ fees billed in this method. Fifteen minute increments can quickly inflate an attorney’s fee. For example, reviewing an email that may have taken five minutes is billed at fifteen minutes. This type of practice is clearly unreasonable and results in an excessive fee. Tenth-of-an-hour increments are more frequently used among lawyers. Billing in tenth-of-an-hour increments more accurately reflects the time actually spent performing a task.

The use of vague descriptions in billing entries generally warrants a reduction in an attorney’s fee. This is especially true where is it completely unclear as to what task was performed by the attorney or staff. Inadequate task descriptions make it impossible for the client or the court to determine the reasonableness of the time spent on a particular task. Moreover, vague task descriptions make it difficult to determine whether such tasks were either relevant or necessary to the case. An adequate entry would include the names of the documents that were reviewed so that a reasonable person could determine why the review was necessary. Additionally, the subject matter and names of all participants of telephone conversations, emails, or correspondence should also be included in a time entry. The more detail that is provided, the more accurately the fee can be assessed for its reasonableness.