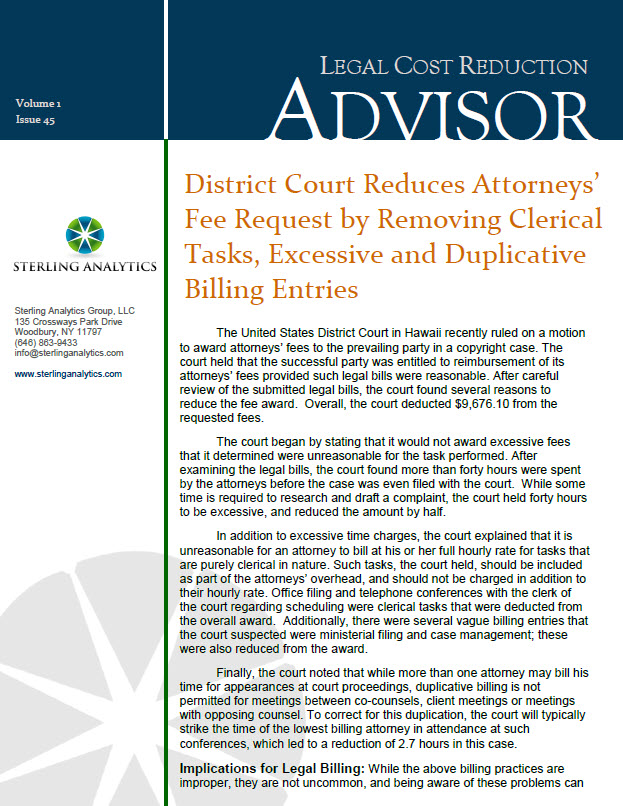 The United States District Court in Hawaii recently ruled on a motion to award attorneys’ fees to the prevailing party in a copyright case. The court held that the successful party was entitled to reimbursement of its attorneys’ fees provided such legal bills were reasonable. After careful review of the submitted legal bills, the court found several reasons to reduce the fee award. Overall, the court deducted $9,676.10 from the requested fees.

The court began by stating that it would not award excessive fees that it determined were unreasonable for the task performed. After examining the legal bills, the court found more than forty hours were spent by the attorneys before the case was even filed with the court. While some time is required to research and draft a complaint, the court held forty hours to be excessive, and reduced the amount by half.

In addition to excessive time charges, the court explained that it is unreasonable for an attorney to bill at his or her full hourly rate for tasks that are purely clerical in nature. Such tasks, the court held, should be included as part of the attorneys’ overhead, and should not be charged in addition to their hourly rate. Office filing and telephone conferences with the clerk of the court regarding scheduling were clerical tasks that were deducted from the overall award. Additionally, there were several vague billing entries that the court suspected were ministerial filing and case management; these were also reduced from the award.

Finally, the court noted that while more than one attorney may bill his time for appearances at court proceedings, duplicative billing is not permitted for meetings between co-counsels, client meetings or meetings with opposing counsel. To correct for this duplication, the court will typically strike the time of the lowest billing attorney in attendance at such conferences, which led to a reduction of 2.7 hours in this case.

Implications for Legal Billing: While the above billing practices are improper, they are not uncommon, and being aware of these problems can reduce the amount a client pays in legal bills. As this case demonstrates, excessive, duplicative and clerical tasks cannot be billed by an attorney. Just as the court in this case carefully examined the attorneys’ bills, clients should take the time to review the legal bills from their representation. While it may be hard to judge whether the time spent on any given task is excessive, it pays to note how many attorneys are charging for their attendance at client or intra-office meetings. It is reasonable to request that only one attorney charge for his attendance at such a conference, even if it is the lawyer with the highest hourly rate. By eliminating the charges of other, less senior attorneys, a client can reduce his legal bills significantly.

Similarly, reviewing one’s legal bills for clerical tasks performed by an attorney can also reduce costs. While filing and copying documents, and communicating with the court are essential aspects of a client’s successful representation, these tasks should not be performed by an attorney. Instead, these undertakings should be completed by a secretary, whose salary is subsumed in the law firm’s general office overhead. Enforcing this practice, and requiring clerical tasks to be performed by a secretary, can further reduce a client’s legal fees.

*Nat’l Commission for Certification of Crane Operators v. Ventula, 2010 WL 2179505 (D. Hi. 2010). Full copies of court decisions may be available through counsel or through various Internet links or paid services.