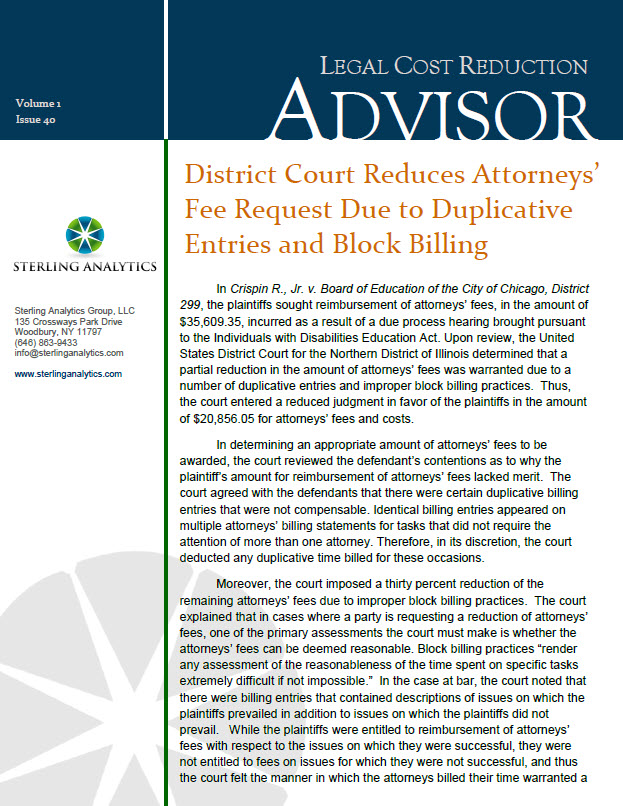 In determining an appropriate amount of attorneys’ fees to be awarded, the court reviewed the defendant’s contentions as to why the plaintiff’s amount for reimbursement of attorneys’ fees lacked merit. The court agreed with the defendants that there were certain duplicative billing entries that were not compensable. Identical billing entries appeared on multiple attorneys’ billing statements for tasks that did not require the attention of more than one attorney. Therefore, in its discretion, the court deducted any duplicative time billed for these occasions.

Moreover, the court imposed a thirty percent reduction of the remaining attorneys’ fees due to improper block billing practices. The court explained that in cases where a party is requesting a reduction of attorneys’ fees, one of the primary assessments the court must make is whether the attorneys’ fees can be deemed reasonable. Block billing practices “render any assessment of the reasonableness of the time spent on specific tasks extremely difficult if not impossible.” In the case at bar, the court noted that there were billing entries that contained descriptions of issues on which the plaintiffs prevailed in addition to issues on which the plaintiffs did not prevail. While the plaintiffs were entitled to reimbursement of attorneys’ fees with respect to the issues on which they were successful, they were not entitled to fees on issues for which they were not successful, and thus the court felt the manner in which the attorneys billed their time warranted a thirty percent reduction in order for such fees to be deemed reasonable.

While there are many occasions in which the attention of more than one attorney is required for a particular task, clients should be cautious of duplicative billing entries. Improper duplicative entries frequently appear on legal bills, and thus impermissibly inflate legal fees.

Along the same lines, block billing practices can also lead to impermissible inflation of attorneys’ fees. Although block billing is not absolutely prohibited, it prevents a client from reasonably understanding whether each charge, taken alone, reflects compensable work and therefore is frowned upon. Each billing entry should be sufficiently specific as to the amount of time spent on each individual task, rather than grouping several tasks together for a larger time period. Clients should be able to discern from their legal bills how much time was spent by his or her attorney on each independent task so that they can determine whether such time was spent reasonably.