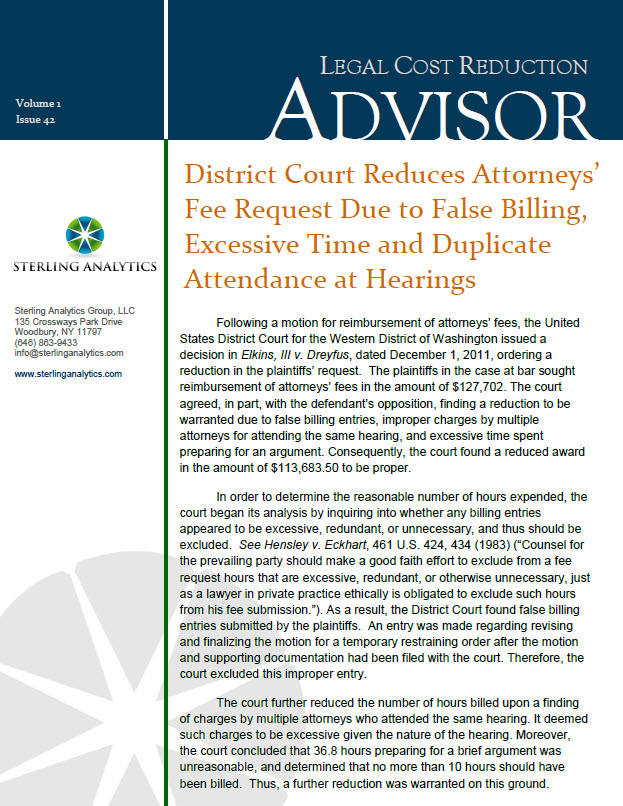 Following a motion for reimbursement of attorneys’ fees, the United States District Court for the Western District of Washington issued a decision in Elkins, III v. Dreyfus, dated December 1, 2011, ordering a reduction in the plaintiffs’ request. The plaintiffs in the case at bar sought reimbursement of attorneys’ fees in the amount of $127,702. The court agreed, in part, with the defendant’s opposition, finding a reduction to be warranted due to false billing entries, improper charges by multiple attorneys for attending the same hearing, and excessive time spent preparing for an argument. Consequently, the court found a reduced award in the amount of $113,683.50 to be proper.

In order to determine the reasonable number of hours expended, the court began its analysis by inquiring into whether any billing entries appeared to be excessive, redundant, or unnecessary, and thus should be excluded. See Hensley v. Eckhart, 461 U.S. 424, 434 (1983) (“Counsel for the prevailing party should make a good faith effort to exclude from a fee request hours that are excessive, redundant, or otherwise unnecessary, just as a lawyer in private practice ethically is obligated to exclude such hours from his fee submission.”). As a result, the District Court found false billing entries submitted by the plaintiffs. An entry was made regarding revising and finalizing the motion for a temporary restraining order after the motion and supporting documentation had been filed with the court. Therefore, the court excluded this improper entry.

The court further reduced the number of hours billed upon a finding of charges by multiple attorneys who attended the same hearing. It deemed such charges to be excessive given the nature of the hearing. Moreover, the court concluded that 36.8 hours preparing for a brief argument was unreasonable, and determined that no more than 10 hours should have been billed. Thus, a further reduction was warranted on this ground.

Implications for Legal Billing: While an attorney is entitled to his or her reasonable fees, as dictated by the relevant market, a fee is not reasonable if it includes excessive, redundant, or unnecessary billing entries. As demonstrated by Elkins, III v. Dreyfus, clients should be cognizant of false billing entries, improper charges by multiple attorneys for attending the same hearing or conference, and excessive hours expended preparing for an argument. Although certain improper billing practices may be difficult for the untrained eye to recognize, some are easily detectable and can result in tremendous savings in legal fees to the client.