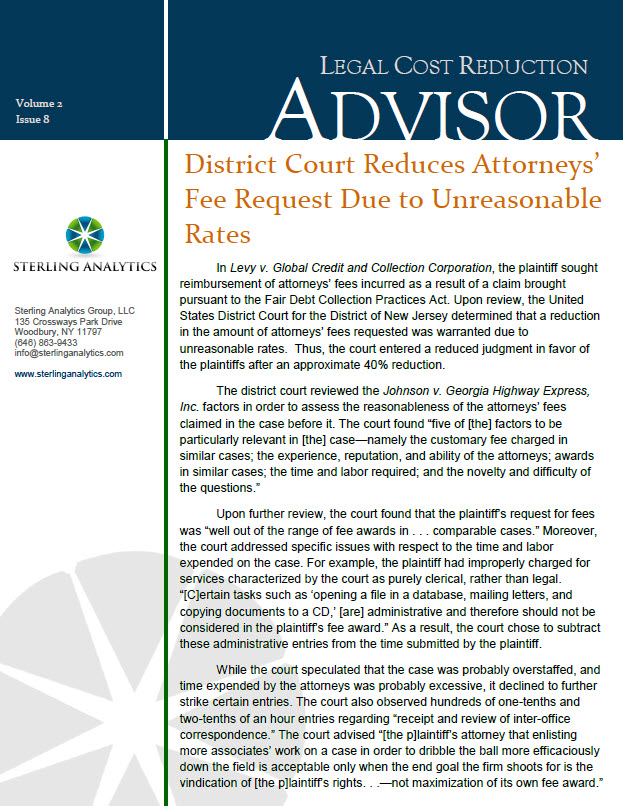 In Levy v. Global Credit and Collection Corporation, the plaintiff sought reimbursement of attorneys’ fees incurred as a result of a claim brought pursuant to the Fair Debt Collection Practices Act. Upon review, the United States District Court for the District of New Jersey determined that a reduction in the amount of attorneys’ fees requested was warranted due to unreasonable rates. Thus, the court entered a reduced judgment in favor of the plaintiffs after an approximate 40% reduction.

The district court reviewed the Johnson v. Georgia Highway Express, Inc. factors in order to assess the reasonableness of the attorneys’ fees claimed in the case before it. The court found “five of [the] factors to be particularly relevant in [the] case—namely the customary fee charged in similar cases; the experience, reputation, and ability of the attorneys; awards in similar cases; the time and labor required; and the novelty and difficulty of the questions.”

Upon further review, the court found that the plaintiff’s request for fees was “well out of the range of fee awards in . . . comparable cases.” Moreover, the court addressed specific issues with respect to the time and labor expended on the case. For example, the plaintiff had improperly charged for services characterized by the court as purely clerical, rather than legal. “[C]ertain tasks such as ‘opening a file in a database, mailing letters, and copying documents to a CD,’ [are] administrative and therefore should not be considered in the plaintiff’s fee award.” As a result, the court chose to subtract these administrative entries from the time submitted by the plaintiff.

While the court speculated that the case was probably overstaffed, and time expended by the attorneys was probably excessive, it declined to further strike certain entries. The court also observed hundreds of one-tenths and two-tenths of an hour entries regarding “receipt and review of inter-office correspondence.” The court advised “[the p]laintiff’s attorney that enlisting more associates’ work on a case in order to dribble the ball more efficaciously down the field is acceptable only when the end goal the firm shoots for is the vindication of [the p]laintiff’s rights. . .—not maximization of its own fee award.”

Implications for Legal Billing: Tasks that are purely clerical or secretarial in nature are not compensable, regardless of who performs them. However, tasks undertaken by a paralegal are compensable at a paralegal rate, so long as the work performed requires some form of legal analysis, or “legal judgment”. Moreover, the work must be “sufficiently complex to justify the efforts of a paralegal, as opposed to an employee at the next rung lower on the pay-scale.” People Who Care v. Rockford Board of Education, School District No. 205, 90 F.3d 1307, 1315 (7th Cir. 1996).

The American Bar Association has set forth in the Model Guidelines for the Utilization of Paralegal Services greater distinctions for when paralegal services should be compensated. In the Comment to Guideline 8, it states that some jurisdictional requirements include that “services performed must be legal in nature rather than clerical, . . . [the paralegal must be] qualified by education, training or work to perform the assigned work, . . . [and there must be] evidence that the work performed by the paralegal would have had to be performed by the attorney at a higher rate.”

Clients should be cautious of billing entries at attorney or paralegal rates for tasks that are purely clerical or secretarial in nature. This improper billing practice can unethically inflate legal bills and, if noticed, can lead to a reduction of legal fees. Such non-compensable tasks include organizing files, preparing documents for mailing, photocopying, scanning, and tabbing exhibits. However, tasks such as preparing trial exhibits and witness binders, locating cases, and reviewing legal documents have been recognized by courts as compensable at paralegal rates determined by the relevant market.