District Court Reduces Attorneys’ Fees by Over $50,000 Due to Block Billing 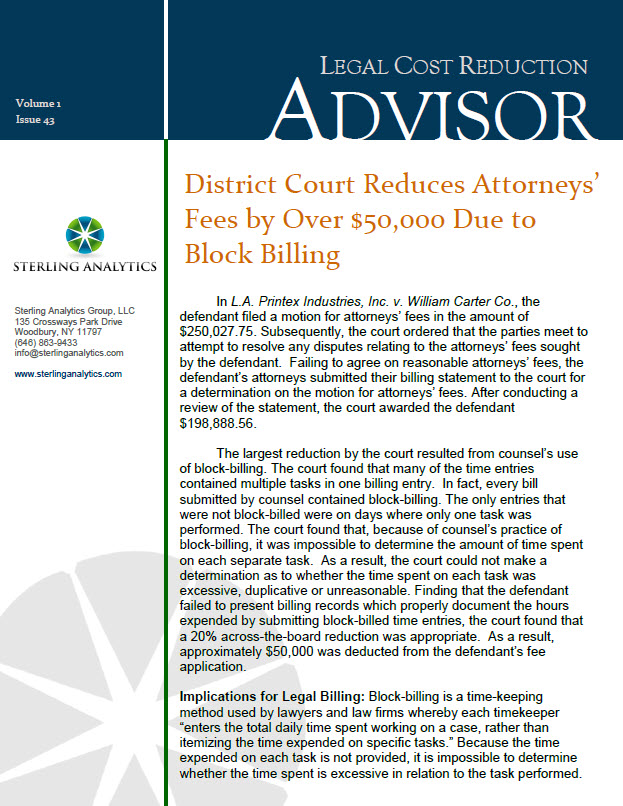 The largest reduction by the court resulted from counsel’s use of block-billing. The court found that many of the time entries contained multiple tasks in one billing entry. In fact, every bill submitted by counsel contained block-billing. The only entries that were not block-billed were on days where only one task was performed. The court found that, because of counsel’s practice of block-billing, it was impossible to determine the amount of time spent on each separate task. As a result, the court could not make a determination as to whether the time spent on each task was excessive, duplicative or unreasonable. Finding that the defendant failed to present billing records which properly document the hours expended by submitting block-billed time entries, the court found that a 20% across-the-board reduction was appropriate. As a result, approximately $50,000 was deducted from the defendant’s fee application.

Implications for Legal Billing: Block-billing is a time-keeping method used by lawyers and law firms whereby each timekeeper “enters the total daily time spent working on a case, rather than itemizing the time expended on specific tasks.” Because the time expended on each task is not provided, it is impossible to determine whether the time spent is excessive in relation to the task performed. Moreover, as noted by the court, block-billing may inflate time by 10 to 30 percent. This is because block-billed time entries cannot be accurately audited. To avoid this risk, the time spent on each discrete task must be separately itemized. Unfortunately, block-billing is frequently used by attorneys and law firms to record time. However, block-billed time entries can be easily identified by reviewing the time records provided with the billing statement. As shown by this decision, entries recorded in a block-billed format warrant a percentage reduction to compensate for the risk of an inflated fee.