District Court Reduces Attorneys’ Fees by Over $680,000 due to Unreasonable Hourly Rates, Overbilling, and Limited Success on the Merits 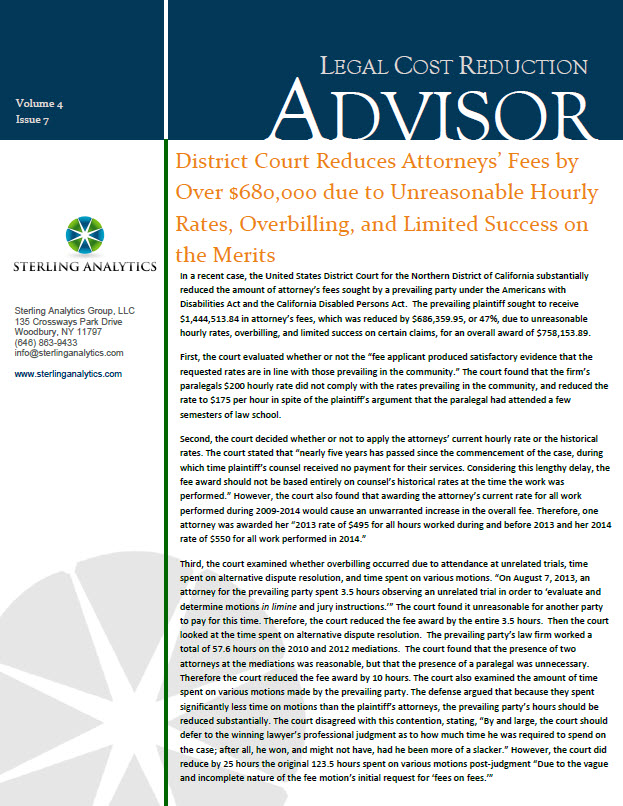 In a recent case, the United States District Court for the Northern District of California substantially reduced the amount of attorney’s fees sought by a prevailing party under the Americans with Disabilities Act and the California Disabled Persons Act. The prevailing plaintiff sought to receive $1,444,513.84 in attorney’s fees, which was reduced by $686,359.95, or 47%, due to unreasonable hourly rates, overbilling, and limited success on certain claims, for an overall award of $758,153.89.

First, the court evaluated whether or not the “fee applicant produced satisfactory evidence that the requested rates are in line with those prevailing in the community.” The court found that the firm’s paralegals $200 hourly rate did not comply with the rates prevailing in the community, and reduced the rate to $175 per hour in spite of the plaintiff’s argument that the paralegal had attended a few semesters of law school.

Second, the court decided whether or not to apply the attorneys’ current hourly rate or the historical rates. The court stated that “nearly five years has passed since the commencement of the case, during which time plaintiff’s counsel received no payment for their services. Considering this lengthy delay, the fee award should not be based entirely on counsel’s historical rates at the time the work was performed.” However, the court also found that awarding the attorney’s current rate for all work performed during 2009-2014 would cause an unwarranted increase in the overall fee. Therefore, one attorney was awarded her “2013 rate of $495 for all hours worked during and before 2013 and her 2014 rate of $550 for all work performed in 2014.”

Third, the court examined whether overbilling occurred due to attendance at unrelated trials, time spent on alternative dispute resolution, and time spent on various motions. “On August 7, 2013, an attorney for the prevailing party spent 3.5 hours observing an unrelated trial in order to ‘evaluate and determine motions in limine and jury instructions.’” The court found it unreasonable for another party to pay for this time. Therefore, the court reduced the fee award by the entire 3.5 hours. Then the court looked at the time spent on alternative dispute resolution. The prevailing party’s law firm worked a total of 57.6 hours on the 2010 and 2012 mediations. The court found that the presence of two attorneys at the mediations was reasonable, but that the presence of a paralegal was unnecessary. Therefore the court reduced the fee award by 10 hours. The court also examined the amount of time spent on various motions made by the prevailing party. The defense argued that because they spent significantly less time on motions than the plaintiff’s attorneys, the prevailing party’s hours should be reduced substantially. The court disagreed with this contention, stating, “By and large, the court should defer to the winning lawyer’s professional judgment as to how much time he was required to spend on the case; after all, he won, and might not have, had he been more of a slacker.” However, the court did reduce by 25 hours the original 123.5 hours spent on various motions post-judgment “Due to the vague and incomplete nature of the fee motion’s initial request for ‘fees on fees.’”

Fourth, the court determined whether or not this case was covered under the California Disabled Persons Act and Unruh Act as “involving a contingent risk or requiring extraordinary legal skill” so as to warrant a 1.5x multiplier to the attorney fee award. The court found that no fee enhancement was warranted because the skill of the counsel, the difficulty and novelty of the underlying legal issues, and the contingent nature of the fee award were already included in the attorney fee award. In fact, the court actually decreased the award by 20% under the Acts because a sizeable portion of the parties’ motions were for claims that were deemed irrelevant or unsuccessful.