District Court Reduces Attorney’s Fees by Over $800,000 due to Inadequate Billing Records, Overlawyering, and the Result Obtained 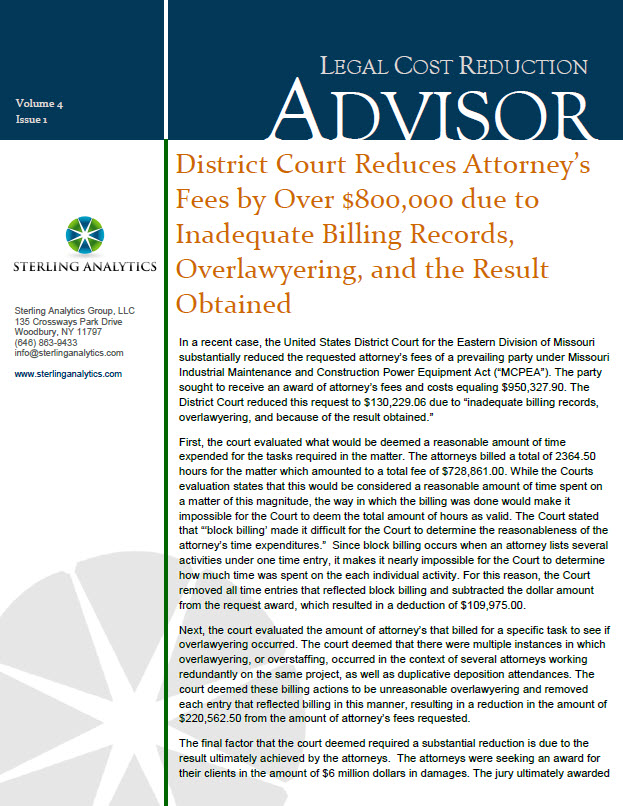 In a recent case, the United States District Court for the Eastern Division of Missouri substantially reduced the requested attorney’s fees of a prevailing party under Missouri Industrial Maintenance and Construction Power Equipment Act (“MCPEA”). The party sought to receive an award of attorney’s fees and costs equaling $950,327.90. The District Court reduced this request to $130,229.06 due to “inadequate billing records, overlawyering, and because of the result obtained.”

First, the court evaluated what would be deemed a reasonable amount of time expended for the tasks required in the matter. The attorneys billed a total of 2364.50 hours for the matter which amounted to a total fee of $728,861.00. While the Courts evaluation states that this would be considered a reasonable amount of time spent on a matter of this magnitude, the way in which the billing was done would make it impossible for the Court to deem the total amount of hours as valid. The Court stated that “’block billing’ made it difficult for the Court to determine the reasonableness of the attorney’s time expenditures.” Since block billing occurs when an attorney lists several activities under one time entry, it makes it nearly impossible for the Court to determine how much time was spent on the each individual activity. For this reason, the Court removed all time entries that reflected block billing and subtracted the dollar amount from the request award, which resulted in a deduction of $109,975.00.

Next, the court evaluated the amount of attorney’s that billed for a specific task to see if overlawyering occurred. The court deemed that there were multiple instances in which overlawyering, or overstaffing, occurred in the context of several attorneys working redundantly on the same project, as well as duplicative deposition attendances. The court deemed these billing actions to be unreasonable overlawyering and removed each entry that reflected billing in this manner, resulting in a reduction in the amount of $220,562.50 from the amount of attorney’s fees requested.

The Court then looked to the costs that the party was seeking for reimbursement. The Court deemed that the court lacked sufficient proof in the areas of Trial Support Costs and for Electronic Discovery management. Since the attorney’s did not provide sufficient proof to establish that services were reasonable, the Court deemed that the attorney could not recover any of the requested amount of $49,942.80. Furthermore, the court reduced the amount of Expert Witness fee’s that could be recovered due to the lack of clear legal billing and because of the ultimate result achieved by the attorneys. The court reduced the Expert Witness fee’s from $148,861.26 to $22,437.30.

Implications for Legal Billing: This decision highlights the importance of attorneys keeping detailed billing records. Additionally, attorneys must utilize billing judgment to ensure that the correct amounts of attorneys are assigned to a given task. A court will often reduce the amount of attorney’s fees requested where the billing is unclear and does not allow them to adequately assess if the amount of time billed would be reasonable for a certain task.