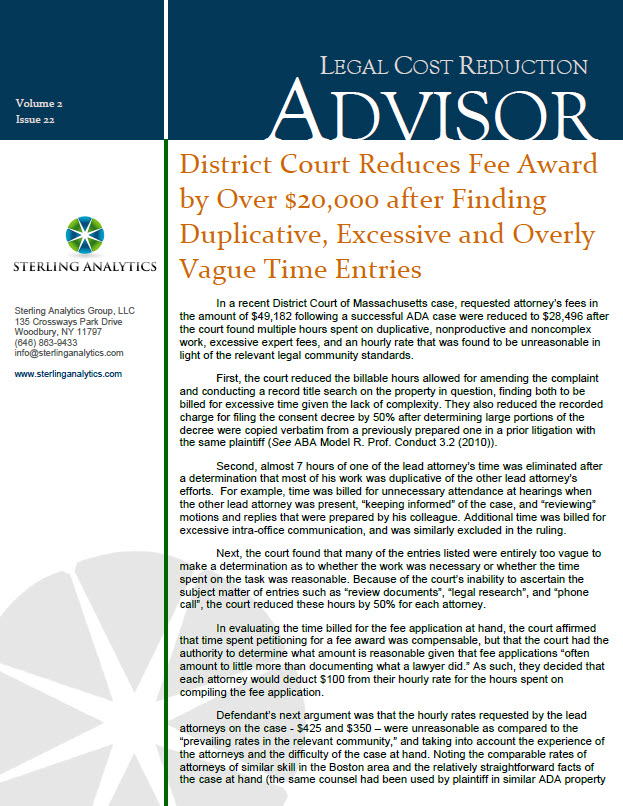 In a recent District Court of Massachusetts case, requested attorney’s fees in the amount of $49,182 following a successful ADA case were reduced to $28,496 after the court found multiple hours spent on duplicative, nonproductive and noncomplex work, excessive expert fees, and an hourly rate that was found to be unreasonable in light of the relevant legal community standards.

First, the court reduced the billable hours allowed for amending the complaint and conducting a record title search on the property in question, finding both to be billed for excessive time given the lack of complexity. They also reduced the recorded charge for filing the consent decree by 50% after determining large portions of the decree were copied verbatim from a previously prepared one in a prior litigation with the same plaintiff (See ABA Model R. Prof. Conduct 3.2 (2010)).

Second, almost 7 hours of one of the lead attorney’s time was eliminated after a determination that most of his work was duplicative of the other lead attorney’s efforts. For example, time was billed for unnecessary attendance at hearings when the other lead attorney was present, “keeping informed” of the case, and “reviewing” motions and replies that were prepared by his colleague. Additional time was billed for excessive intra-office communication, and was similarly excluded in the ruling.

Next, the court found that many of the entries listed were entirely too vague to make a determination as to whether the work was necessary or whether the time spent on the task was reasonable. Because of the court’s inability to ascertain the subject matter of entries such as “review documents”, “legal research”, and “phone call”, the court reduced these hours by 50% for each attorney.

In evaluating the time billed for the fee application at hand, the court affirmed that time spent petitioning for a fee award was compensable, but that the court had the authority to determine what amount is reasonable given that fee applications “often amount to little more than documenting what a lawyer did.” As such, they decided that each attorney would deduct $100 from their hourly rate for the hours spent on compiling the fee application.

Defendant’s next argument was that the hourly rates requested by the lead attorneys on the case – $425 and $350 – were unreasonable as compared to the “prevailing rates in the relevant community,” and taking into account the experience of the attorneys and the difficulty of the case at hand. Noting the comparable rates of attorneys of similar skill in the Boston area and the relatively straightforward facts of the case at hand (the same counsel had been used by plaintiff in similar ADA property compliance cases in the past), the court reduced the hourly rate of each attorney to $325 and $250, respectively.

Last, when reviewing the proposed reimbursement of costs, the court found that many items lacked sufficient detail. For example, certain airfare entries were listed at prices higher than what was reflected in the credit card receipts, without explanation as to where the additional amount came from. Furthermore, many FedEx shipments were not well documented, and did “not include the subject matter or otherwise identify the necessity for the shipments.” The court excluded the cost of these FedEx shipments in their entirety from the fee award. Lastly, the court concluded that the $5,900 expert fee was excessive in light of the unreasonable amount of time spent drafting the report and reduced the compensable amount to $3,000. In all, the court reduced the total requested fee award by over 40%.

Implications for Legal Billing: This decision reaffirms the rule that attorneys may not charge their client for work that is duplicative and redundant. When one attorney completes specific tasks or bills for attending hearings, co-counsel may not bill for attending the same hearing or trial, or for reviewing and keeping “up to speed” with the other attorney’s work. Although communication is allowed, two attorneys cannot bill for the same time spent. Any hours deemed to be unproductive and repetitive will be similarly disallowed.

Additionally, listed entries on a fee application pertaining either to time spent on an activity or as a disbursement must be detailed and include sufficient particularity as to subject matter, persons involved, and necessity. Billing for emails, phone calls, copies, or mail services without including details about their nature is a violation of ethical rules, and will be reduced accordingly by the court.

Last, the court reestablished their authority to determine what constitutes a reasonable hourly rate for an attorney given their location, skill set, and experience, among other factors. Additionally, the court has the power to adjust hourly rates depending on the task or activity at hand, such as determining what the appropriate hourly rate should be for time spent on a fee application. The lodestar amount will be adjusted accordingly.