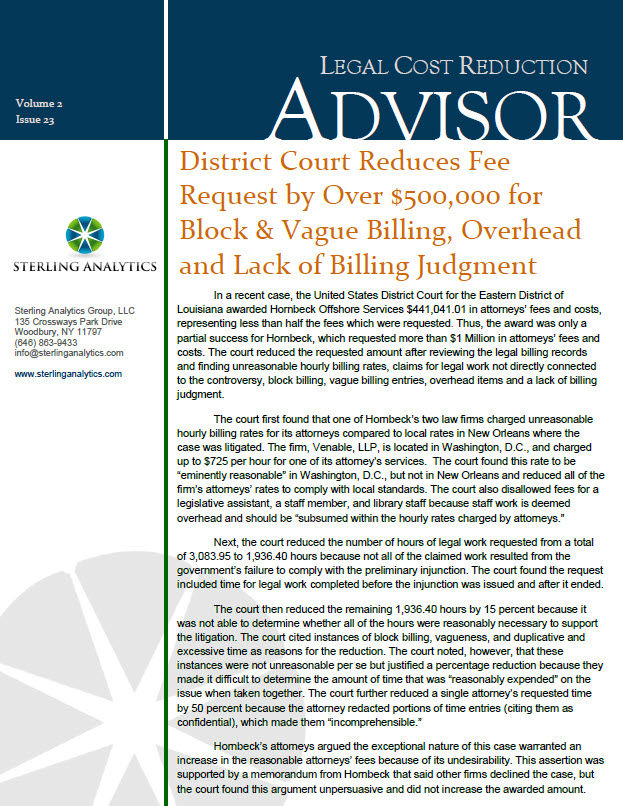 In a recent case, the United States District Court for the Eastern District of Louisiana awarded Hornbeck Offshore Services $441,041.01 in attorneys’ fees and costs, representing less than half the fees which were requested. Thus, the award was only a partial success for Hornbeck, which requested more than $1 Million in attorneys’ fees and costs. The court reduced the requested amount after reviewing the legal billing records and finding unreasonable hourly billing rates, claims for legal work not directly connected to the controversy, block billing, vague billing entries, overhead items and a lack of billing judgment.

The court first found that one of Hornbeck’s two law firms charged unreasonable hourly billing rates for its attorneys compared to local rates in New Orleans where the case was litigated. The firm, Venable, LLP, is located in Washington, D.C., and charged up to $725 per hour for one of its attorney’s services. The court found this rate to be “eminently reasonable” in Washington, D.C., but not in New Orleans and reduced all of the firm’s attorneys’ rates to comply with local standards. The court also disallowed fees for a legislative assistant, a staff member, and library staff because staff work is deemed overhead and should be “subsumed within the hourly rates charged by attorneys.”

Next, the court reduced the number of hours of legal work requested from a total of 3,083.95 to 1,936.40 hours because not all of the claimed work resulted from the government’s failure to comply with the preliminary injunction. The court found the request included time for legal work completed before the injunction was issued and after it ended.

The court then reduced the remaining 1,936.40 hours by 15 percent because it was not able to determine whether all of the hours were reasonably necessary to support the litigation. The court cited instances of block billing, vagueness, and duplicative and excessive time as reasons for the reduction. The court noted, however, that these instances were not unreasonable per se but justified a percentage reduction because they made it difficult to determine the amount of time that was “reasonably expended” on the issue when taken together. The court further reduced a single attorney’s requested time by 50 percent because the attorney redacted portions of time entries (citing them as confidential), which made them “incomprehensible.”

Hornbeck’s attorneys argued the exceptional nature of this case warranted an increase in the reasonable attorneys’ fees because of its undesirability. This assertion was supported by a memorandum from Hornbeck that said other firms declined the case, but the court found this argument unpersuasive and did not increase the awarded amount.

Last, the court reduced the amount of Hornbeck’s requested costs “by 75 percent to account for lack of evidence of the necessity and reasonableness of the costs and lack of evidence of billing judgment.” In particular, the court deducted charges for “computerized research, postage, telephone calls, facsimile transmission and express delivery services” because Federal courts consider them part of a firm’s overhead.

Implications for Legal Billing: This case reaffirms the principle that reasonableness will be judged according to local market standards. Courts will reduce an attorney’s hourly billing rate if it exceeds a reasonable rate where the case is litigated even if the attorney’s experience commands a higher rate in another market.

In addition, time sheets must be kept in a transparent manner that allows courts to readily determine whether work was reasonably necessary to advance the case. Practices such as block billing make it difficult for courts to determine whether the entry is reasonable because activities are grouped together under a single entry and do not explain how or why the work is necessary. Attorneys seeking fees are also required to demonstrate that they exercised billing judgment. Such judgment may be shown by “’writing off unproductive, excessive, or redundant hours’” when seeking a fee award. It is not enough to declare that billing judgment has been exercised without a billing record that indicates the hours that have been written off.

Finally, law firms routinely charge clients for clerical work and other on-going overhead expenses, such as rent, office supplies, local telephone charges, routine messenger services, local travel, and computer research. Overhead is not compensable and is considered part of an attorney’s cost of doing business. Attorneys may charge clients for photocopy expenses if the expense is included in a retainer agreement, but the charge must be reasonable (generally no more than $.10 per page).