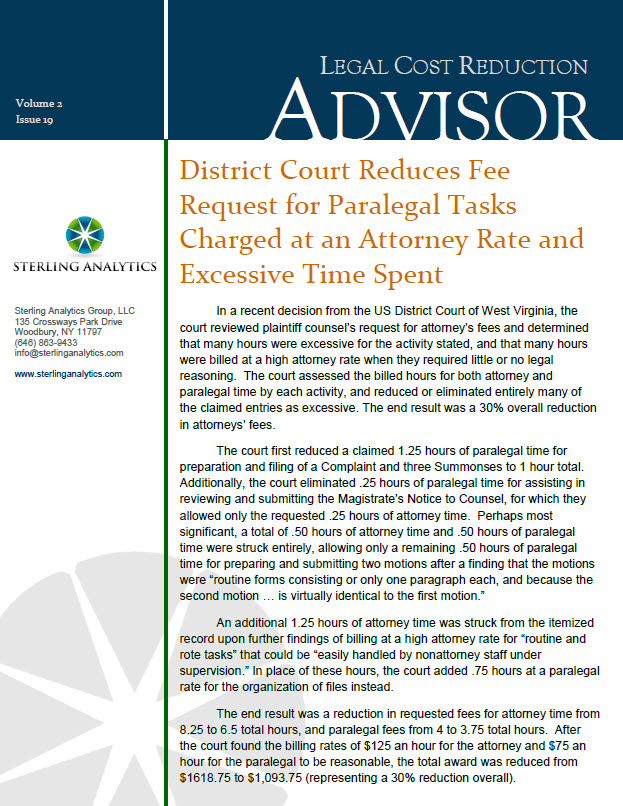 In a recent decision from the US District Court of West Virginia, the court reviewed plaintiff counsel’s request for attorney’s fees and determined that many hours were excessive for the activity stated, and that many hours were billed at a high attorney rate when they required little or no legal reasoning. The court assessed the billed hours for both attorney and paralegal time by each activity, and reduced or eliminated entirely many of the claimed entries as excessive. The end result was a 30% overall reduction in attorneys’ fees.

An additional 1.25 hours of attorney time was struck from the itemized record upon further findings of billing at a high attorney rate for “routine and rote tasks” that could be “easily handled by nonattorney staff under supervision.” In place of these hours, the court added .75 hours at a paralegal rate for the organization of files instead.

Implications for Legal Billing: This case demonstrates that even where attorneys are found to be claiming a low amount of hours at a reasonable hourly rate, a court will still look at itemized bills to determine whether activities seem to have taken an excessive amount of time given the difficulty (or lack thereof) of the particular task, and whether some of those activities could have been accomplished by a paralegal rather than an attorney.

Simple actions such as the preparation, review and filing of routine documents will be held to a stricter standard, and excessive time spent on these activities will be reduced accordingly. Additionally, the client should have the benefit of paying a lower paralegal rate for tasks that can be accomplished by a non-attorney, such as preparing and filing routine forms.