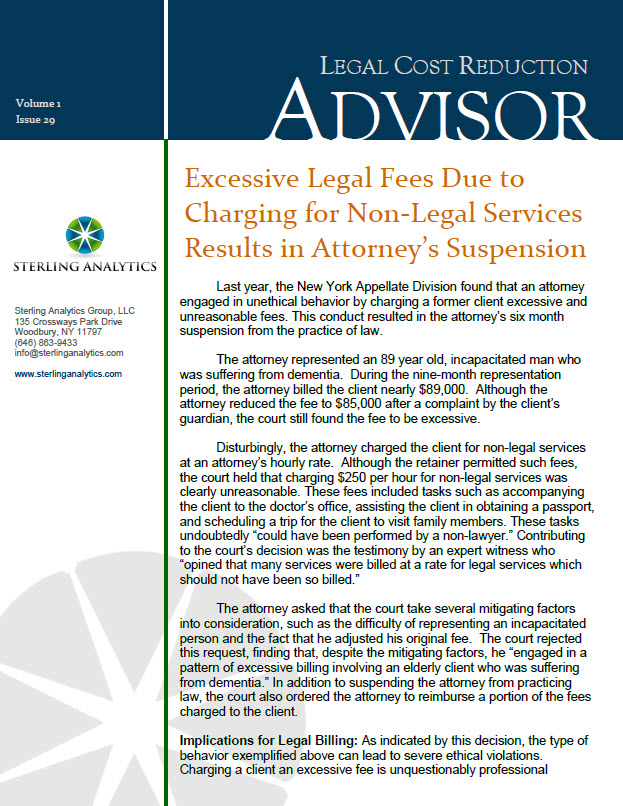 Last year, the New York Appellate Division found that an attorney engaged in unethical behavior by charging a former client excessive and unreasonable fees. This conduct resulted in the attorney’s six month suspension from the practice of law.

The attorney represented an 89 year old, incapacitated man who was suffering from dementia. During the nine-month representation period, the attorney billed the client nearly $89,000. Although the attorney reduced the fee to $85,000 after a complaint by the client’s guardian, the court still found the fee to be excessive.

Disturbingly, the attorney charged the client for non-legal services at an attorney’s hourly rate. Although the retainer permitted such fees, the court held that charging $250 per hour for non-legal services was clearly unreasonable. These fees included tasks such as accompanying the client to the doctor’s office, assisting the client in obtaining a passport, and scheduling a trip for the client to visit family members. These tasks undoubtedly “could have been performed by a non-lawyer.” Contributing to the court’s decision was the testimony by an expert witness who “opined that many services were billed at a rate for legal services which should not have been so billed.”

The attorney asked that the court take several mitigating factors into consideration, such as the difficulty of representing an incapacitated person and the fact that he adjusted his original fee. The court rejected this request, finding that, despite the mitigating factors, he “engaged in a pattern of excessive billing involving an elderly client who was suffering from dementia.” In addition to suspending the attorney from practicing law, the court also ordered the attorney to reimburse a portion of the fees charged to the client.

Implications for Legal Billing: As indicated by this decision, the type of behavior exemplified above can lead to severe ethical violations. Charging a client an excessive fee is unquestionably professional misconduct and, as demonstrated in this case, can result in an attorney’s suspension from the practice of law. Also apparent from this decision is the principle that an attorney should not charge non-legal services at an attorney’s hourly rate. This is a clear ethical violation as it results in an excessive and unreasonable fee. Non-legal services performed by an attorney should certainly be charged at a reduced hourly rate, if charged for at all. This is true even where the non-legal tasks are incident to the legal services provided. Not only can this conduct lead to suspension, but an attorney may also be ordered to reimburse the client for any charges that exceed a reasonable fee. This further demonstrates that this type of conduct will not be tolerated.

*In re Towns, 75 A.D.3d 93 (N.Y. App. Div. 3d Dep’t 2010). Full copies of court decisions may be available through counsel or through various Internet links or paid services.