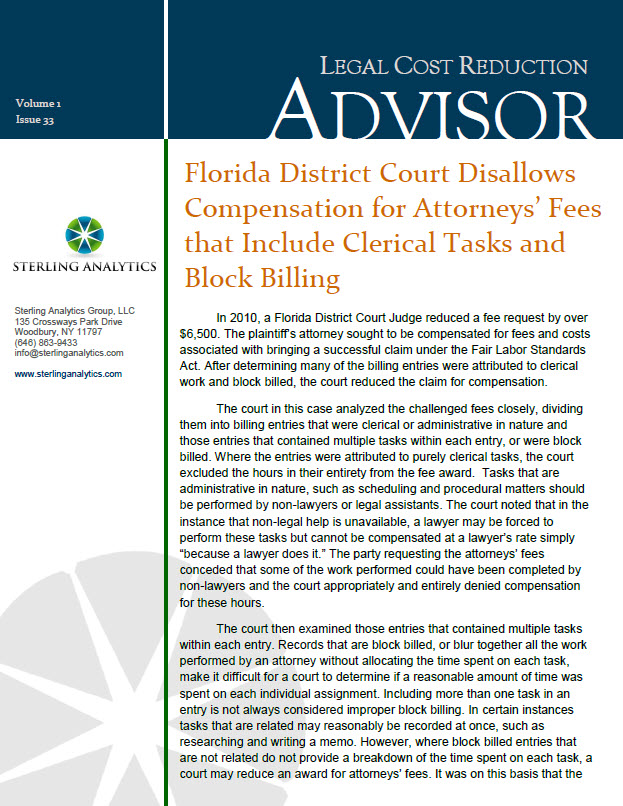 In 2010, a Florida District Court Judge reduced a fee request by over $6,500. The plaintiff’s attorney sought to be compensated for fees and costs associated with bringing a successful claim under the Fair Labor Standards Act. After determining many of the billing entries were attributed to clerical work and block billed, the court reduced the claim for compensation.

The court in this case analyzed the challenged fees closely, dividing them into billing entries that were clerical or administrative in nature and those entries that contained multiple tasks within each entry, or were block billed. Where the entries were attributed to purely clerical tasks, the court excluded the hours in their entirety from the fee award. Tasks that are administrative in nature, such as scheduling and procedural matters should be performed by non-lawyers or legal assistants. The court noted that in the instance that non-legal help is unavailable, a lawyer may be forced to perform these tasks but cannot be compensated at a lawyer’s rate simply “because a lawyer does it.” The party requesting the attorneys’ fees conceded that some of the work performed could have been completed by non-lawyers and the court appropriately and entirely denied compensation for these hours.

The court then examined those entries that contained multiple tasks within each entry. Records that are block billed, or blur together all the work performed by an attorney without allocating the time spent on each task, make it difficult for a court to determine if a reasonable amount of time was spent on each individual assignment. Including more than one task in an entry is not always considered improper block billing. In certain instances tasks that are related may reasonably be recorded at once, such as researching and writing a memo. However, where block billed entries that are not related do not provide a breakdown of the time spent on each task, a court may reduce an award for attorneys’ fees. It was on this basis that the court reduced compensation for this set of billing entries by fifty percent.

Implications for Legal Billing: As evidenced by the case above, there are numerous improper billing practices that can inflate legal bills. When the resources are available, a law firm should delegate clerical or administrative tasks to non-lawyers, legal assistants or even paralegals. Work of this nature, like basic communications or housekeeping matters, do not require legal judgment or analysis. Where lawyers must perform these tasks due to a lack of non-legal staff, they should be subsumed in the firm’s overhead as they cannot charge for such tasks at their hourly rate. Clients should analyze their own legal bills carefully, being wary of clerical tasks performed by a firm’s top billers. Block billing also typically results in an unethical increase in legal fees. When recording work performed, attorneys should accurately and descriptively document each task and the amount of time spent completing it. Documenting tasks otherwise makes it difficult for a client or a court to determine the reasonableness of the fee request. As demonstrated by this court’s decision, lumping together unrelated tasks, whether they are compensable or not, will often result in a fee reduction.