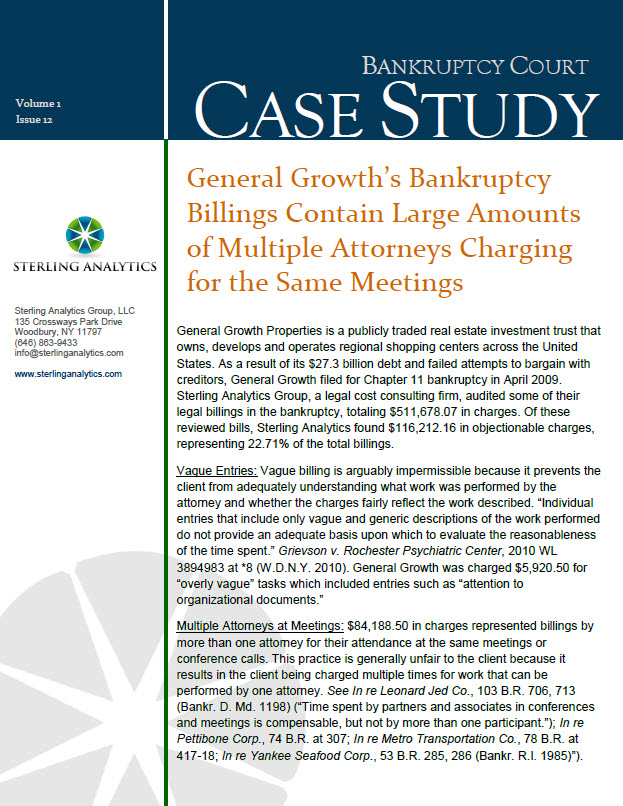 General Growth Properties is a publicly traded real estate investment trust that owns, develops and operates regional shopping centers across the United States. As a result of its $27.3 billion debt and failed attempts to bargain with creditors, General Growth filed for Chapter 11 bankruptcy in April 2009. Sterling Analytics Group, a legal cost consulting firm, audited some of their legal billings in the bankruptcy, totaling $511,678.07 in charges. Of these reviewed bills, Sterling Analytics found $116,212.16 in objectionable charges, representing 22.71% of the total billings.

Vague Entries: Vague billing is arguably impermissible because it prevents the client from adequately understanding what work was performed by the attorney and whether the charges fairly reflect the work described. “Individual entries that include only vague and generic descriptions of the work performed do not provide an adequate basis upon which to evaluate the reasonableness of the time spent.” Grievson v. Rochester Psychiatric Center, 2010 WL 3894983 at *8 (W.D.N.Y. 2010). General Growth was charged $5,920.50 for “overly vague” tasks which included entries such as “attention to organizational documents.”

Attorney Overqualified for Task: A client should be billed based on an hourly rate appropriate to the task being performed, not based on who is performing the task. The General Growth billings contained $6,517.50 in charges representing an attorney billing for a task they were overqualified for, including entries such as “compile daily news alerts.” “Attorneys engaged in clerical tasks ‘should be compensated at the rate for clerical employees or, if the task at issue is the type included in overhead, they should not be compensated at all.’” Tatum v. City of New York, 2010 WL 334975 at *9 (S.D.N.Y. 2010), quoting Rozell v. Ross-Hoist, 576 F.Supp.2d 527, 540 (S.D.N.Y. 2008).

Overhead Charges: A lawyer may not separately charge for overhead expenses unless the client has agreed in advance to such charges in the retainer agreement. See ABA Formal Opinion 93-379 (December 6, 1993). General Growth’s billings contained overhead charges amounting to $19,585.66. Such charges included “computerized research”, among others. “Most courts…have ruled that computer-aided research, like any other form of legal research, is a component of attorney fees and cannot be independently taxed as an item of costs.” Heng v. Rotech Medical Corp., 720 N.W.2d 54, 66 (N.D. 2006).