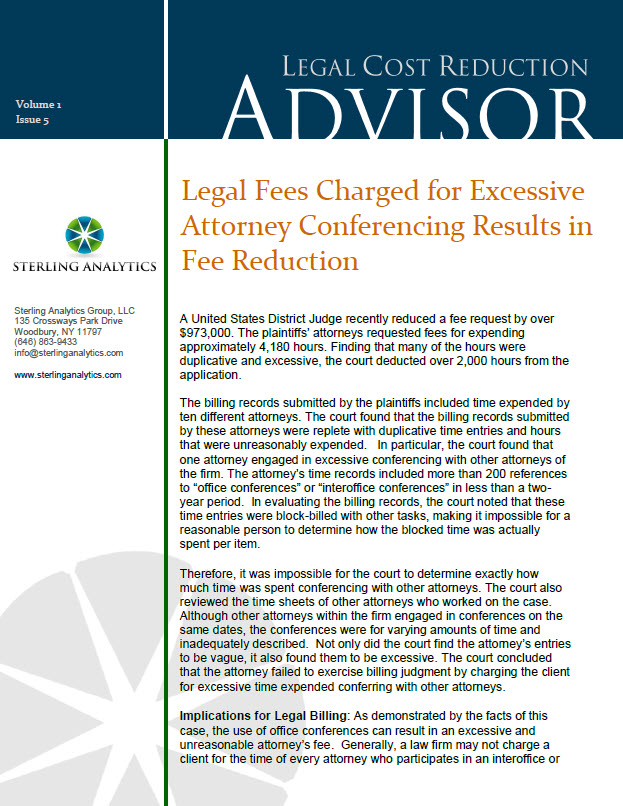 A United States District Judge recently reduced a fee request by over $973,000. The plaintiffs’ attorneys requested fees for expending approximately 4,180 hours. Finding that many of the hours were duplicative and excessive, the court deducted over 2,000 hours from the application.

The billing records submitted by the plaintiffs included time expended by ten different attorneys. The court found that the billing records submitted by these attorneys were replete with duplicative time entries and hours that were unreasonably expended. In particular, the court found that one attorney engaged in excessive conferencing with other attorneys of the firm. The attorney’s time records included more than 200 references to “office conferences” or “interoffice conferences” in less than a two-year period. In evaluating the billing records, the court noted that these time entries were block-billed with other tasks, making it impossible for a reasonable person to determine how the blocked time was actually spent per item.

Implications for Legal Billing: As demonstrated by the facts of this case, the use of office conferences can result in an excessive and unreasonable attorney’s fee. Generally, a law firm may not charge a client for the time of every attorney who participates in an interoffice or intraoffice conference. In the event of an interoffice or intraoffice conference, the client should not be charged for more than one attorney’s time spent in that conference. To do otherwise would result in duplicative and redundant time. In this case, the time records of the attorneys were overly vague and ambiguous and, as a result, the court could not determine whether the client was billed for more than one attorney’s time. However, the court found it significant that the attorney engaged in and billed for over 200 conferences in less than a two year period. It was on this basis that the court reduced the hours for excessive conferencing. Clearly, interoffice and intraoffice conferences can lead to excessive fees when they are utilized too frequently. When the attorneys of a law firm do in fact engage in frequent office conferencing, they have a duty to exercise billing judgment and reduce the time to reflect a reasonable fee.

*Alexander v. City of Jackson, 2011 WL 1059293 (S.D. Miss. 2011). Full copies of court decisions may be available through counsel or through various Internet links or paid services.