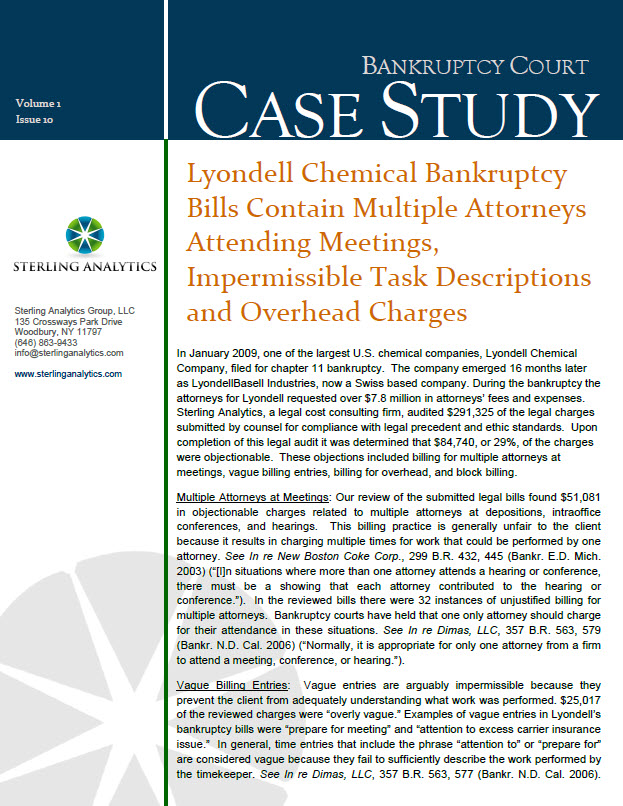 In January 2009, one of the largest U.S. chemical companies, Lyondell Chemical Company, filed for chapter 11 bankruptcy. The company emerged 16 months later as LyondellBasell Industries, now a Swiss based company. During the bankruptcy the attorneys for Lyondell requested over $7.8 million in attorneys’ fees and expenses. Sterling Analytics, a legal cost consulting firm, audited $291,325 of the legal charges submitted by counsel for compliance with legal precedent and ethic standards. Upon completion of this legal audit it was determined that $84,740, or 29%, of the charges were objectionable. These objections included billing for multiple attorneys at meetings, vague billing entries, billing for overhead, and block billing.

Multiple Attorneys at Meetings: Our review of the submitted legal bills found $51,081 in objectionable charges related to multiple attorneys at depositions, intraoffice conferences, and hearings. This billing practice is generally unfair to the client because it results in charging multiple times for work that could be performed by one attorney. See In re New Boston Coke Corp., 299 B.R. 432, 445 (Bankr. E.D. Mich. 2003) (“[I]n situations where more than one attorney attends a hearing or conference, there must be a showing that each attorney contributed to the hearing or conference.”). In the reviewed bills there were 32 instances of unjustified billing for multiple attorneys. Bankruptcy courts have held that one only attorney should charge for their attendance in these situations. See In re Dimas, LLC, 357 B.R. 563, 579 (Bankr. N.D. Cal. 2006) (“Normally, it is appropriate for only one attorney from a firm to attend a meeting, conference, or hearing.”).

Vague Billing Entries: Vague entries are arguably impermissible because they prevent the client from adequately understanding what work was performed. $25,017 of the reviewed charges were “overly vague.” Examples of vague entries in Lyondell’s bankruptcy bills were “prepare for meeting” and “attention to excess carrier insurance issue.” In general, time entries that include the phrase “attention to” or “prepare for” are considered vague because they fail to sufficiently describe the work performed by the timekeeper. See In re Dimas, LLC, 357 B.R. 563, 577 (Bankr. N.D. Cal. 2006). Vague entries such as these are “routinely disallowed” by bankruptcy courts. In re Hirsch, 2008 WL 5234057, at *7 (Bankr. E.D.N.Y. 2008).

Block Billing: $3,330 of the reviewed charges represented “impermissible” block billing. Block billing is the practice of lumping charges together rather than separately charging for each task. Block billing prevents the client from understanding how much time was dedicated to each individual task and determining whether a specific task reflected compensable work. Bankruptcy courts often reduce attorneys’ fee requests due to block billing. See In re Baker, 374 B.R. 489 (E.D.N.Y. 2007) (reducing entire bill by 20% due to improper block billing); In re New Towne Development Group, LLC, 2010 WL 1451480, at *5 (Bankr. M.D. La. 2010) (reducing fees by one-half for all lumped billing entries).