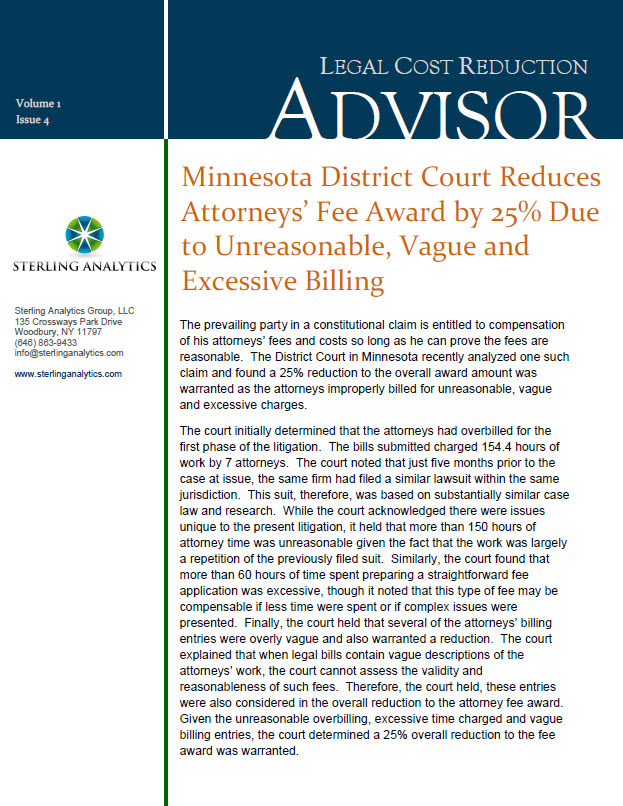 The prevailing party in a constitutional claim is entitled to compensation of his attorneys’ fees and costs so long as he can prove the fees are reasonable. The District Court in Minnesota recently analyzed one such claim and found a 25% reduction to the overall award amount was warranted as the attorneys improperly billed for unreasonable, vague and excessive charges.

The court initially determined that the attorneys had overbilled for the first phase of the litigation. The bills submitted charged 154.4 hours of work by 7 attorneys. The court noted that just five months prior to the case at issue, the same firm had filed a similar lawsuit within the same jurisdiction. This suit, therefore, was based on substantially similar case law and research. While the court acknowledged there were issues unique to the present litigation, it held that more than 150 hours of attorney time was unreasonable given the fact that the work was largely a repetition of the previously filed suit. Similarly, the court found that more than 60 hours of time spent preparing a straightforward fee application was excessive, though it noted that this type of fee may be compensable if less time were spent or if complex issues were presented. Finally, the court held that several of the attorneys’ billing entries were overly vague and also warranted a reduction. The court explained that when legal bills contain vague descriptions of the attorneys’ work, the court cannot assess the validity and reasonableness of such fees. Therefore, the court held, these entries were also considered in the overall reduction to the attorney fee award. Given the unreasonable overbilling, excessive time charged and vague billing entries, the court determined a 25% overall reduction to the fee award was warranted.

Implications for Legal Billing: As the client, it is often very difficult to determine whether the amount of time spent on a given task is reasonable. Therefore, it is important to have clear billing guidelines established prior to the representation. If an attorney has a similar case, claim or document from a previous client, the client should only be charged for the time spent updating or applying that document or research for the purposes of your representation. In other words, an attorney may not charge multiple clients for the same research, drafting or other work, unless he divides the total time proportionately and accurately. Having a provision in billing guidelines to this effect can save a great deal of costs in your legal fees. Additionally, attorney bills that contain vague work descriptions can result in excessive charges as a client cannot determine whether the task or time spent was reasonable. A provision in billing guidelines regarding such vague entries is also advisable. By stating that a client will not compensate the attorney for a task or description that is overly vague, there is a reduced risk of paying for improper charges.