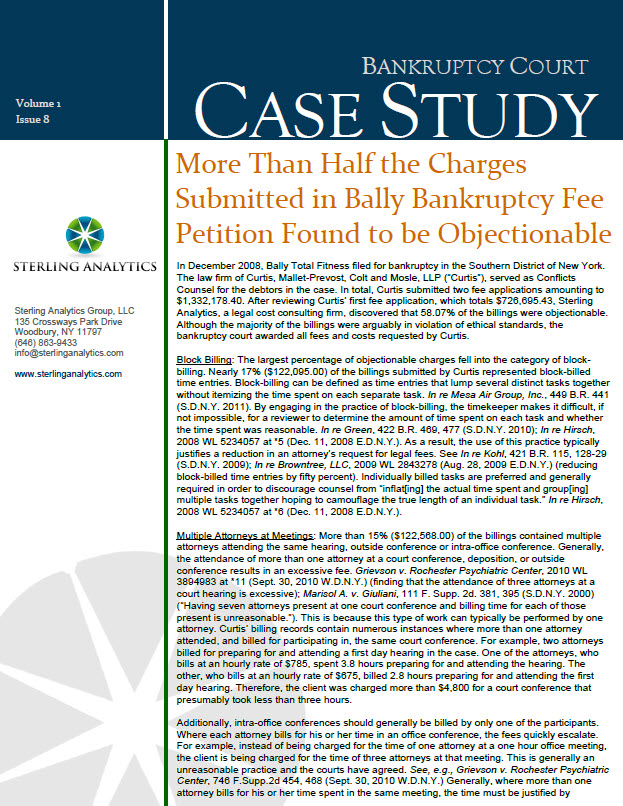 In December 2008, Bally Total Fitness filed for bankruptcy in the Southern District of New York. The law firm of Curtis, Mallet-Prevost, Colt and Mosle, LLP (“Curtis”), served as Conflicts Counsel for the debtors in the case. In total, Curtis submitted two fee applications amounting to $1,332,178.40. After reviewing Curtis’ first fee application, which totals $726,695.43, Sterling Analytics, a legal cost consulting firm, discovered that 58.07% of the billings were objectionable. Although the majority of the billings were arguably in violation of ethical standards, the bankruptcy court awarded all fees and costs requested by Curtis.

Multiple Attorneys at Meetings: More than 15% ($122,568.00) of the billings contained multiple attorneys attending the same hearing, outside conference or intra-office conference. Generally, the attendance of more than one attorney at a court conference, deposition, or outside conference results in an excessive fee. Grievson v. Rochester Psychiatric Center, 2010 WL 3894983 at *11 (Sept. 30, 2010 W.D.N.Y.) (finding that the attendance of three attorneys at a court hearing is excessive); Marisol A. v. Giuliani, 111 F. Supp. 2d. 381, 395 (S.D.N.Y. 2000) (“Having seven attorneys present at one court conference and billing time for each of those present is unreasonable.”). This is because this type of work can typically be performed by one attorney. Curtis’ billing records contain numerous instances where more than one attorney attended, and billed for participating in, the same court conference. For example, two attorneys billed for preparing for and attending a first day hearing in the case. One of the attorneys, who bills at an hourly rate of $785, spent 3.8 hours preparing for and attending the hearing. The other, who bills at an hourly rate of $675, billed 2.8 hours preparing for and attending the first day hearing. Therefore, the client was charged more than $4,800 for a court conference that presumably took less than three hours.

Additionally, intra-office conferences should generally be billed by only one of the participants. Where each attorney bills for his or her time in an office conference, the fees quickly escalate. For example, instead of being charged for the time of one attorney at a one hour office meeting, the client is being charged for the time of three attorneys at that meeting. This is generally an unreasonable practice and the courts have agreed. See, e.g., Grievson v. Rochester Psychiatric Center, 746 F.Supp.2d 454, 468 (Sept. 30, 2010 W.D.N.Y.) Generally, where more than one attorney bills for his or her time spent in the same meeting, the time must be justified by providing the client with an adequate explanation of each attorney’s role in the meeting. In re Bennett Funding Group, Inc., 213 B.R. 234, 245 (N.D.N.Y. 1997).

False Billing: Alarmingly, nearly $100,000 of the objectionable charges represented “false” billing practices. The “false” billing objections mainly resulted from two attorneys billing for attending the same meeting, each recording inconsistent times spent in the meeting. Although many of the discrepancies were between 6 and 12 minutes, some time entries were actually doubled. For example, one attorney billed 18 minutes for attending an office meeting while the other billed 36 minutes for the same meeting. This practice is highly unethical. See Model Rules of Professional Conduct 1.5. It is possible that the inconsistencies were recorded without intending to be deceitful or dishonest. However, where an attorney cannot recall how long a particular meeting took, he or she should communicate with the other participating attorney to determine the most accurate time.

Overhead Charges: Curtis charged more than $41,000 in costs that are typically considered overhead. Overhead is defined as the costs and expenses typically associated with maintaining and operating a law firm. Overhead costs are not reimbursable by the law firm at the client’s expense. Law firms are compensated for such expenses through the hourly rates charged by the attorneys and paralegals. The following are just a few examples of objectionable charges that were found while conducting a review of the records: approximately $500 in meal charges (Tatum v. City of New York, 2010 WL 334975 at *13 (Jan. 28, 2010 S.D.N.Y.) (“[M]eals that are not required by out-of-town travel are not compensable.”)); approximately $5,800 in word processing charges; and more than $31,000 in computerized research charges (S.E.C. v. Goren, 272 F.Supp.2d 202, 214 (E.D.N.Y. 2003) (refusing to award $18,000 for Lexis and Westlaw charges)).

Overqualified for Task: Nearly $30,000 of the objectionable charges resulted from professionals performing tasks which they were overqualified to perform. Typically, professionals who perform clerical tasks should not charge their clients for that time or, at the very least, bill their clients at a reduced hourly rate. Tatum v. City of New York, 2010 WL 334975 at *9 (Jan. 28, 2010 S.D.N.Y.) Curtis billed $323 for organizing a file. Courts have frequently held that organizing is a clerical task that is included in the firm’s overhead and, therefore, is not compensable. In re Hudson, 364 B.R. 875, 881 (N.D.N.Y. 2007) (“The court considers administrative activities, photocopying, organizing documents, etc. clerical tasks included in a firm’s overhead rather than services of a legal nature.”). Moreover, countless hours were spent “compiling” and “assembling” documents. Such time should have never been billed to the client. Id. at 881 (“Assembling and photocopying exhibits is something the court considers clerical in nature.”).

In addition to clerical tasks, some of the entries were objected to because the billing attorney charged his or her full hourly rate for time spent traveling. Courts will typically allow attorneys to be compensated for travel time, but at half of the attorney’s normal hourly rate. Gonzalez v. Bratton, 147 F.Supp.2d 180, 213 (S.D.N.Y. 2001) (reducing travel time by 50%); But See Tatum v. City of New York, 2010 WL 334975 at *8 (Jan. 28, 2010 S.D.N.Y.) (declining to award fees associated with travel time, finding that clients generally resist paying for such time). Moreover, it is important to note that where the billing attorney is performing legal services during travel, courts will allow such time to be billed at the full rate.