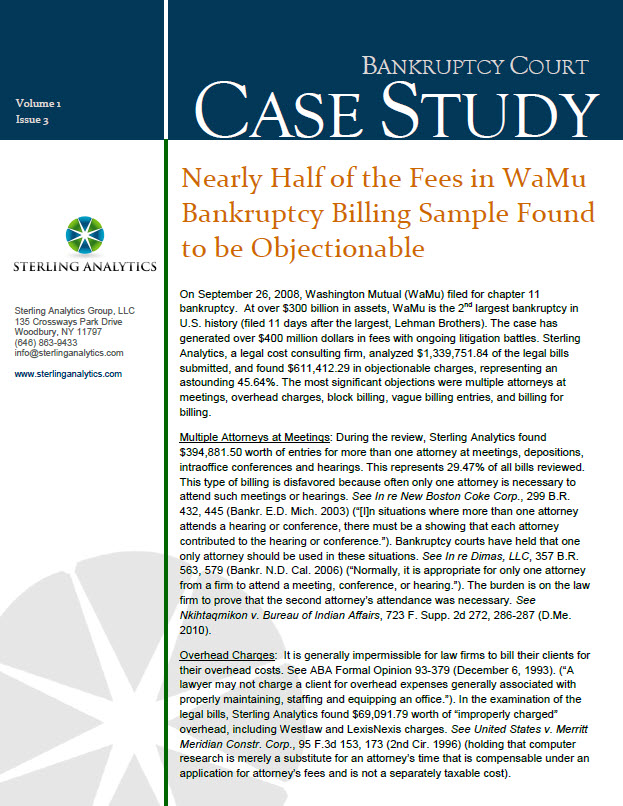 On September 26, 2008, Washington Mutual (WaMu) filed for chapter 11 bankruptcy. At over $300 billion in assets, WaMu is the 2nd largest bankruptcy in U.S. history (filed 11 days after the largest, Lehman Brothers). The case has generated over $400 million dollars in fees with ongoing litigation battles. Sterling Analytics, a legal cost consulting firm, analyzed $1,339,751.84 of the legal bills submitted, and found $611,412.29 in objectionable charges, representing an astounding 45.64%. The most significant objections were multiple attorneys at meetings, overhead charges, block billing, vague billing entries, and billing for billing.

Multiple Attorneys at Meetings: During the review, Sterling Analytics found $394,881.50 worth of entries for more than one attorney at meetings, depositions, intraoffice conferences and hearings. This represents 29.47% of all bills reviewed. This type of billing is disfavored because often only one attorney is necessary to attend such meetings or hearings. See In re New Boston Coke Corp., 299 B.R. 432, 445 (Bankr. E.D. Mich. 2003) (“[I]n situations where more than one attorney attends a hearing or conference, there must be a showing that each attorney contributed to the hearing or conference.”). Bankruptcy courts have held that one only attorney should be used in these situations. See In re Dimas, LLC, 357 B.R. 563, 579 (Bankr. N.D. Cal. 2006) (“Normally, it is appropriate for only one attorney from a firm to attend a meeting, conference, or hearing.”). The burden is on the law firm to prove that the second attorney’s attendance was necessary. See Nkihtaqmikon v. Bureau of Indian Affairs, 723 F. Supp. 2d 272, 286-287 (D.Me. 2010).

Overhead Charges: It is generally impermissible for law firms to bill their clients for their overhead costs. See ABA Formal Opinion 93-379 (December 6, 1993). (“A lawyer may not charge a client for overhead expenses generally associated with properly maintaining, staffing and equipping an office.”). In the examination of the legal bills, Sterling Analytics found $69,091.79 worth of “improperly charged” overhead, including Westlaw and LexisNexis charges. See United States v. Merritt Meridian Constr. Corp., 95 F.3d 153, 173 (2nd Cir. 1996) (holding that computer research is merely a substitute for an attorney’s time that is compensable under an application for attorney’s fees and is not a separately taxable cost).

Block Billing: $68,101.50 of the reviewed charges represented “impermissible” block billing. Block billing is the practice of grouping charges together rather than listing each charge individually. Block billing is an extremely disfavored form of billing. It makes it very difficult for clients to determine the amount of time spent on each task and whether they are being billed for tasks that would otherwise not be compensable. See Chad Youth Enhancement Center, Inc. v. Colony Nat. Ins. Co., 2010 WL 4007300 at *3 (M.D. Tenn. 2010) (stating that “a 25% across-the-board reduction is appropriate to account for any excessiveness, duplication, redundancy, and block billing”). See Bell v. Prefix 2011 WL 1100090 at *8 (E.D.Mich. 2011) (“[T]he law is clear that significant reductions in time are appropriate where block billing is used.”)

Vague Billing Entries: A billing entry that is vague is “impermissible” because it prevents the client from adequately understanding what work was performed by the attorney and whether the charges fairly reflect the work described. $29,428.50 of the reviewed charges were found to be “overly vague”. Examples of such entries include “Prepare for Hearing” and “Prepare for call with team.” See In re Wiedau’s Inc., 78 B.R. 904, 910 (Bankr. S.D. Ill. 1987) (reducing counsel’s fee application by 70% because many entries, particularly telephone calls, were “simply unexplained,” while others gave “no indication as to why services were rendered or how the services benefited the estate”). Further, when requesting a fee award, the burden is on the applicant to prove the reasonableness of such fees. In re Acevedo, 2010 WL 411105 at *2.

Billing for Billing: A client should not be billed for time spent maintaining or creating billing records, or for reviewing or discussing such records. $12,074 of the audited bills contained billing entries for creating or editing legal bills. It is generally impermissible to bill the bankruptcy estate for time spent assembling billing records. In re Dimas, LLC, 357 B.R. 563, 591 (Bankr. N.D. Cal. 2006); In re Meese, 907 F2d 1192,1203 (D.C. Cir. 1990).