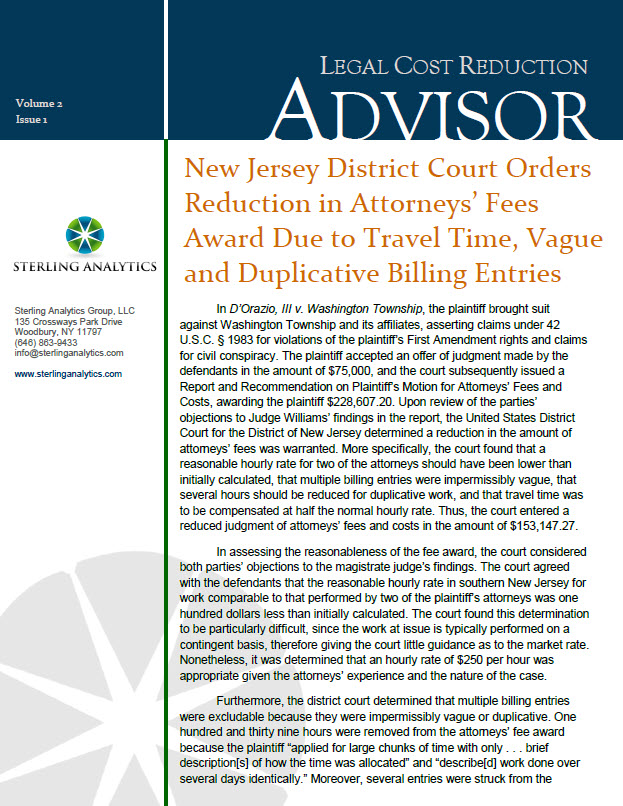 In D’Orazio, III v. Washington Township, the plaintiff brought suit against Washington Township and its affiliates, asserting claims under 42 U.S.C. § 1983 for violations of the plaintiff’s First Amendment rights and claims for civil conspiracy. The plaintiff accepted an offer of judgment made by the defendants in the amount of $75,000, and the court subsequently issued a Report and Recommendation on Plaintiff’s Motion for Attorneys’ Fees and Costs, awarding the plaintiff $228,607.20. Upon review of the parties’ objections to Judge Williams’ findings in the report, the United States District Court for the District of New Jersey determined a reduction in the amount of attorneys’ fees was warranted. More specifically, the court found that a reasonable hourly rate for two of the attorneys should have been lower than initially calculated, that multiple billing entries were impermissibly vague, that several hours should be reduced for duplicative work, and that travel time was to be compensated at half the normal hourly rate. Thus, the court entered a reduced judgment of attorneys’ fees and costs in the amount of $153,147.27.

In assessing the reasonableness of the fee award, the court considered both parties’ objections to the magistrate judge’s findings. The court agreed with the defendants that the reasonable hourly rate in southern New Jersey for work comparable to that performed by two of the plaintiff’s attorneys was one hundred dollars less than initially calculated. The court found this determination to be particularly difficult, since the work at issue is typically performed on a contingent basis, therefore giving the court little guidance as to the market rate. Nonetheless, it was determined that an hourly rate of $250 per hour was appropriate given the attorneys’ experience and the nature of the case.

Furthermore, the district court determined that multiple billing entries were excludable because they were impermissibly vague or duplicative. One hundred and thirty nine hours were removed from the attorneys’ fee award because the plaintiff “applied for large chunks of time with only . . . brief description[s] of how the time was allocated” and “describe[d] work done over several days identically.” Moreover, several entries were struck from the plaintiff’s legal bills in which two partners with over twenty years of experience attended the same depositions and mediation sessions, for a case the court determined to be insufficiently complex to warrant both of the attorneys’ presence. “A reduction for duplication is warranted only if the attorneys are unreasonably doing the same work.” Rode v. Dellarciprete, 892 F.2d 1177, 1187 (3d Cir. 1990) (citation omitted) (internal quotation marks omitted).

Finally, thirty-five hours for travel time were compensated at half the rate. “In this community, travel time is compensable at the full rate if legal work is performed during the commute, however, the rate is reduced by fifty percent if the attorney did not perform legal tasks.” Glass v. Snellbaker, 2008 WL 4416450, at *9-10 (D. N.J. 2008). Since the billing entries lacked specificity as to what work, if any, was performed during travel time, the district court reduced the attorneys’ billing rate for the thirty-five hours accordingly.

Implications for Legal Billing: Clients should be cautious of billing entries that are not sufficiently detailed in their descriptions. While details are essential for the client to be able to determine the relevance of the task to his or her case, they also provide clarity as to whether each task is sufficiently unique from the others. If multiple billing entries contain identical vague descriptions, it is not apparent whether multiple distinct tasks were performed in furtherance of a client’s case, or if an excessive number of hours were spent on a single task. Moreover, as demonstrated in this case, if a billing entry for travel time is vague, an attorney’s hourly rate will be justifiably halved if it is not clear as to whether legal work was performed during that time.