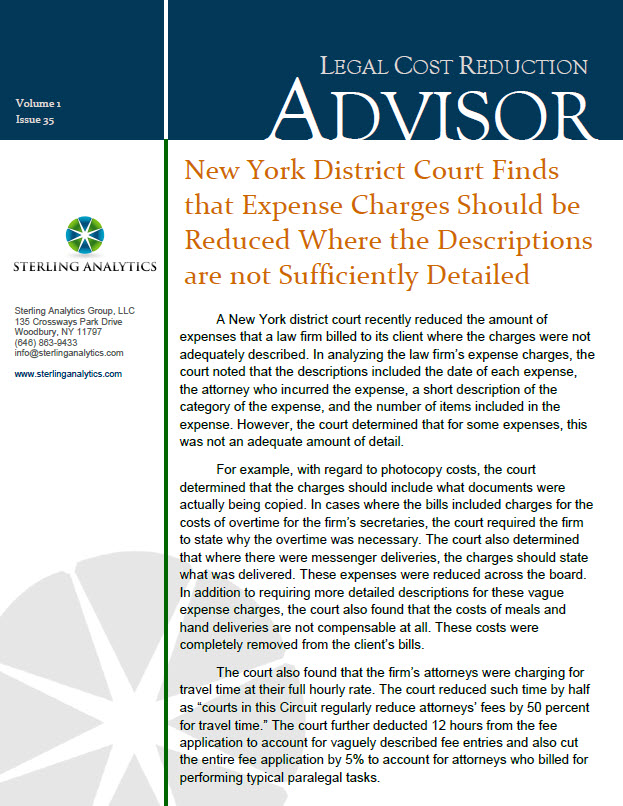 A New York district court recently reduced the amount of expenses that a law firm billed to its client where the charges were not adequately described. In analyzing the law firm’s expense charges, the court noted that the descriptions included the date of each expense, the attorney who incurred the expense, a short description of the category of the expense, and the number of items included in the expense. However, the court determined that for some expenses, this was not an adequate amount of detail.

For example, with regard to photocopy costs, the court determined that the charges should include what documents were actually being copied. In cases where the bills included charges for the costs of overtime for the firm’s secretaries, the court required the firm to state why the overtime was necessary. The court also determined that where there were messenger deliveries, the charges should state what was delivered. These expenses were reduced across the board. In addition to requiring more detailed descriptions for these vague expense charges, the court also found that the costs of meals and hand deliveries are not compensable at all. These costs were completely removed from the client’s bills.

The court also found that the firm’s attorneys were charging for travel time at their full hourly rate. The court reduced such time by half as “courts in this Circuit regularly reduce attorneys’ fees by 50 percent for travel time.” The court further deducted 12 hours from the fee application to account for vaguely described fee entries and also cut the entire fee application by 5% to account for attorneys who billed for performing typical paralegal tasks.

Implications for Legal Billing: An issue that this case dealt with was the amount of detail that should be expected from a law firm when it passes along an expense charge to the client. When it came to photocopies, the court was not content with the firm including only the date, the responsible attorney, and the number of copies that were made. Instead, it insisted that the bill should have contained a description of the type of document that was being photocopied. Similarly, the court expected the legal bills to contain explanations for secretarial overtime and the content of messenger deliveries. The effect is that the client will have more information on the expenses incurred by the law firm, giving them an opportunity to question such charges. By knowing details of the expenses, such as what was copied, what was being delivered, or why overtime was necessary, the client will be in a better position to scrutinize any unnecessary or redundant costs. It gives the client an opportunity to question these costs rather than blindly accepting them just because the firm deemed them necessary.