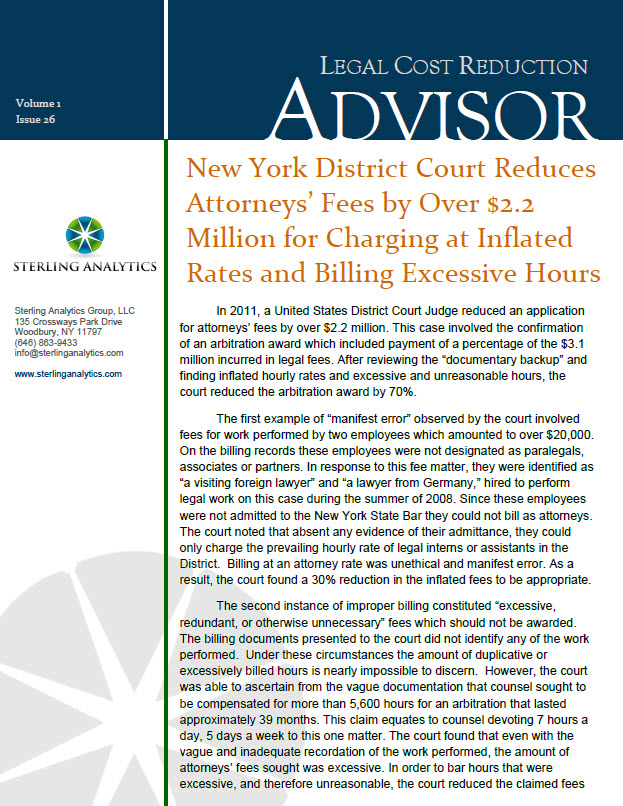 In 2011, a United States District Court Judge reduced an application for attorneys’ fees by over $2.2 million. This case involved the confirmation of an arbitration award which included payment of a percentage of the $3.1 million incurred in legal fees. After reviewing the “documentary backup” and finding inflated hourly rates and excessive and unreasonable hours, the court reduced the arbitration award by 70%.

The first example of “manifest error” observed by the court involved fees for work performed by two employees which amounted to over $20,000. On the billing records these employees were not designated as paralegals, associates or partners. In response to this fee matter, they were identified as “a visiting foreign lawyer” and “a lawyer from Germany,” hired to perform legal work on this case during the summer of 2008. Since these employees were not admitted to the New York State Bar they could not bill as attorneys. The court noted that absent any evidence of their admittance, they could only charge the prevailing hourly rate of legal interns or assistants in the District. Billing at an attorney rate was unethical and manifest error. As a result, the court found a 30% reduction in the inflated fees to be appropriate.

The second instance of improper billing constituted “excessive, redundant, or otherwise unnecessary” fees which should not be awarded. The billing documents presented to the court did not identify any of the work performed. Under these circumstances the amount of duplicative or excessively billed hours is nearly impossible to discern. However, the court was able to ascertain from the vague documentation that counsel sought to be compensated for more than 5,600 hours for an arbitration that lasted approximately 39 months. This claim equates to counsel devoting 7 hours a day, 5 days a week to this one matter. The court found that even with the vague and inadequate recordation of the work performed, the amount of attorneys’ fees sought was excessive. In order to bar hours that were excessive, and therefore unreasonable, the court reduced the claimed fees by 40%.

Implications for Legal Billing: As demonstrated by the facts in the above case, engaging in unethical billing practices can lead to a hefty reduction in claimed fees. In order to protect against attorney misconduct, legal bills should be carefully analyzed with respect to the individual performing the task, the time expended, and to ensure there is a thorough, accurate description of the work. Attorneys should only bill at the prevailing hourly rate for others with comparable experience and skill in the relevant geographic location. Clearly, lawyers not admitted to practice in the jurisdiction cannot bill at the same hourly rate as an admitted partner or associate. In addition, any employee rendering services to a matter should provide adequate documentation so that a court can determine if the amount of time spent on a task is reasonable. Legal bills not in compliance with these basic billing practices represent a lack of billing judgment and are not entirely compensable.

*Szczepanek v. Dabek, 2011 WL 846193 (E.D.N.Y. 2011). Full copies of court decisions may be available through counsel or through various Internet links or paid services.