Over $500,000 in Objectionable Charges Found in Nortel’s Bankruptcy Billing Sample 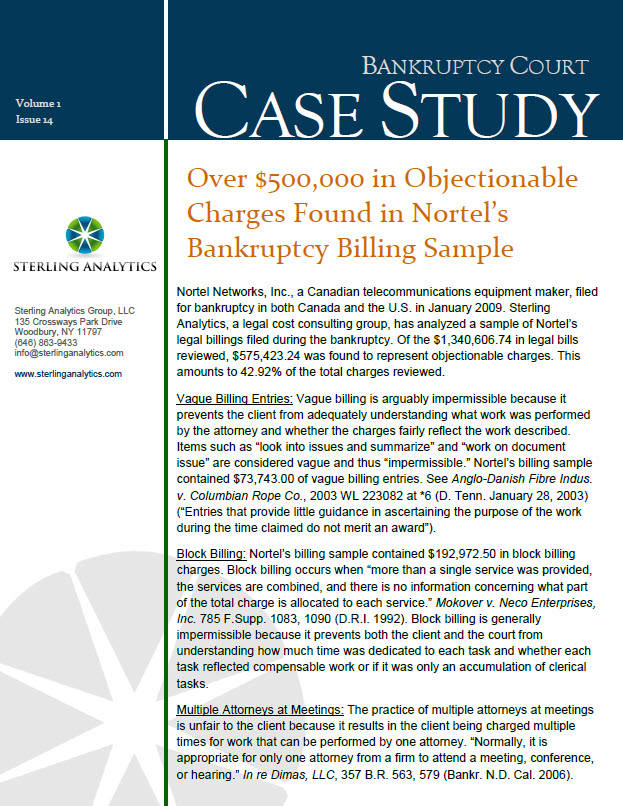 Nortel Networks, Inc., a Canadian telecommunications equipment maker, filed for bankruptcy in both Canada and the U.S. in January 2009. Sterling Analytics, a legal cost consulting group, has analyzed a sample of Nortel’s legal billings filed during the bankruptcy. Of the $1,340,606.74 in legal bills reviewed, $575,423.24 was found to represent objectionable charges. This amounts to 42.92% of the total charges reviewed.

Vague Billing Entries: Vague billing is arguably impermissible because it prevents the client from adequately understanding what work was performed by the attorney and whether the charges fairly reflect the work described. Items such as “look into issues and summarize” and “work on document issue” are considered vague and thus “impermissible.” Nortel’s billing sample contained $73,743.00 of vague billing entries. See Anglo-Danish Fibre Indus. v. Columbian Rope Co., 2003 WL 223082 at *6 (D. Tenn. January 28, 2003) (“Entries that provide little guidance in ascertaining the purpose of the work during the time claimed do not merit an award”).

Block Billing: Nortel’s billing sample contained $192,972.50 in block billing charges. Block billing occurs when “more than a single service was provided, the services are combined, and there is no information concerning what part of the total charge is allocated to each service.” Mokover v. Neco Enterprises, Inc. 785 F.Supp. 1083, 1090 (D.R.I. 1992). Block billing is generally impermissible because it prevents both the client and the court from understanding how much time was dedicated to each task and whether each task reflected compensable work or if it was only an accumulation of clerical tasks.

Multiple Attorneys at Meetings: The practice of multiple attorneys at meetings is unfair to the client because it results in the client being charged multiple times for work that can be performed by one attorney. “Normally, it is appropriate for only one attorney from a firm to attend a meeting, conference, or hearing.” In re Dimas, LLC, 357 B.R. 563, 579 (Bankr. N.D. Cal. 2006). Nortel’s billing sample contained $222,279.00 in charges for multiple attorneys attending the same meeting, hearing or conference.

Attorney Overqualified for Task: “An attorney may be overqualified for particular services which could reasonably be performed by a less skilled or experienced attorney or by a lay person. In such a case, it may be unreasonable to value the attorney’s time at his regular billing rate.” Chrapliwy v. Uniroyal, Inc., 670 F.2d 760, 767 n.16 (7th Cir. 1982). Nortel was billed $55,901.00 for charges where it seemed an attorney was overqualified for the task performed. Examples of such charges include “sort through documents” and “edit calendar,” among others.

Overhead Charges: “Costs that are considered overhead costs, or normal expenses of doing business, are not reimbursable.” Abbot v. Village of Winthrop Harbor, 1999 WL 675292 at 5 (N.D. Ill. 1999). In the absence of express permission from a client, an attorney should not be permitted to pass on the cost of doing business to a client. Typical overhead charges include computerized legal research, travel costs, and meals. Nortel’s billing sample contained $9,567.74 in overhead charges.

Long Billing Days: High double digit billing days, or a long period of such days, are questionable and usually excessive. These charges are subject to extra scrutiny, given the difficulty of billing such long days in a normal work environment. See In re New Boston Coke Corp., 299 B.R. 432, 448 (Bankr. E.D. Mich. 2003) (“While it is certainly possible that an attorney could bill ten-, nineteen-, or twenty-hour days, it is unlikely that all of that billed time is compensable”). The highest of such long days in Nortel’s billings amounted to 13 hours. $14,042.00 in total was charged for long billing days.