Over 63% of Dodgers’ Bankruptcy Billing Sample Found to be Objectionable 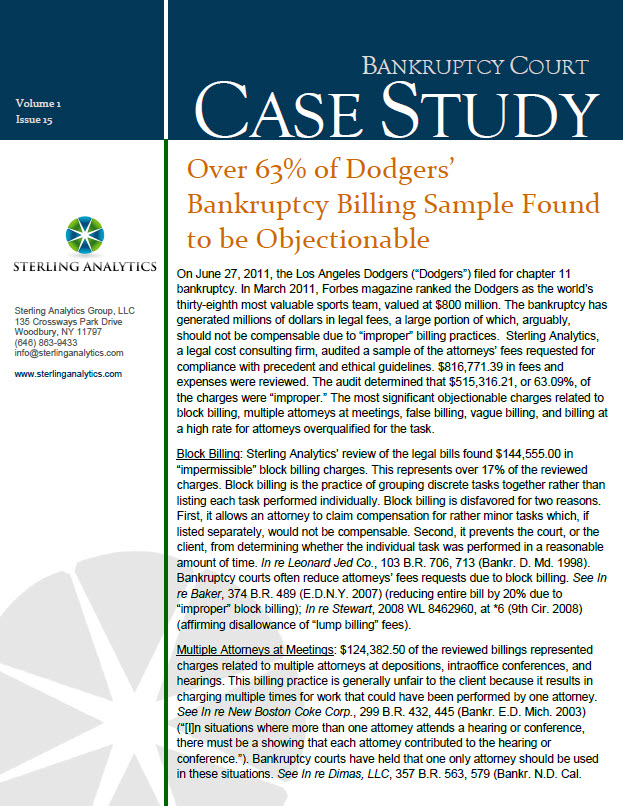 On June 27, 2011, the Los Angeles Dodgers (“Dodgers”) filed for chapter 11 bankruptcy. In March 2011, Forbes magazine ranked the Dodgers as the world’s thirty-eighth most valuable sports team, valued at $800 million. The bankruptcy has generated millions of dollars in legal fees, a large portion of which, arguably, should not be compensable due to “improper” billing practices. Sterling Analytics, a legal cost consulting firm, audited a sample of the attorneys’ fees requested for compliance with precedent and ethical guidelines. $816,771.39 in fees and expenses were reviewed. The audit determined that $515,316.21, or 63.09%, of the charges were “improper.” The most significant objectionable charges related to block billing, multiple attorneys at meetings, false billing, vague billing, and billing at a high rate for attorneys overqualified for the task.

Block Billing: Sterling Analytics’ review of the legal bills found $144,555.00 in “impermissible” block billing charges. This represents over 17% of the reviewed charges. Block billing is the practice of grouping discrete tasks together rather than listing each task performed individually. Block billing is disfavored for two reasons. First, it allows an attorney to claim compensation for rather minor tasks which, if listed separately, would not be compensable. Second, it prevents the court, or the client, from determining whether the individual task was performed in a reasonable amount of time. In re Leonard Jed Co., 103 B.R. 706, 713 (Bankr. D. Md. 1998). Bankruptcy courts often reduce attorneys’ fees requests due to block billing. See In re Baker, 374 B.R. 489 (E.D.N.Y. 2007) (reducing entire bill by 20% due to “improper” block billing); In re Stewart, 2008 WL 8462960, at *6 (9th Cir. 2008) (affirming disallowance of “lump billing” fees).

Multiple Attorneys at Meetings: $124,382.50 of the reviewed billings represented charges related to multiple attorneys at depositions, intraoffice conferences, and hearings. This billing practice is generally unfair to the client because it results in charging multiple times for work that could have been performed by one attorney. See In re New Boston Coke Corp., 299 B.R. 432, 445 (Bankr. E.D. Mich. 2003) (“[I]n situations where more than one attorney attends a hearing or conference, there must be a showing that each attorney contributed to the hearing or conference.”). Bankruptcy courts have held that one only attorney should be used in these situations. See In re Dimas, LLC, 357 B.R. 563, 579 (Bankr. N.D. Cal. 2006) (“Normally, it is appropriate for only one attorney from a firm to attend a meeting, conference, or hearing.”).

False Billing: The review of the bills revealed a total of $121,762.00 in objectionable “false billing” charges. There were numerous billing entries in which two or more attorneys billed for what appeared to be the same conference or telephone call, but the hours billed for such conference or telephone call were inconsistent. “False billing” violates the Model Rules of Professional Conduct and courts have ordered dramatic fee reductions due to such practice. See, e.g. Reed v. Rhodes 179 F.3d 456, 470 (6th Cir. 1999) (ordering a fee reduction, in part, due to the fact that the “applications suffered from . . . serious deficiencies . . . [including] inconsistencies in the amount of time recorded for services that several attorneys had performed together”).

Vague Billing: A billing entry that is vague is arguably impermissible because it prevents the client from adequately understanding what work was performed by the attorney and whether the charges fairly reflect the work described. $70,577.50 of the reviewed charges were found to be “overly vague.” Examples of “vague” entries in the Dodgers bankruptcy billings include “review documents,” “review/analyze agenda” and “review docket filings.” Billings containing vague entries are “routinely disallowed” by bankruptcy courts. In re Hirsch, 2008 WL 5234057, at *7 (Bankr. E.D.N.Y. 2008).

Billing at a High Rate by Attorney Overqualified for the Task: Hourly rates should be appropriate for the task being performed, not for whom is performing the task. If an attorney bills for time spent performing a task for which he or she is overqualified, reimbursement will be determined by the rate appropriate for the task, not the normal rate charged by the attorney performing the task. Courts have held that is unethical for attorneys to bill at their full rate for non-legal services. See, e.g. In re Weaver, 2011 WL 867136, at *4 (Bankr. D.N.M. 2011). Of the reviewed bills, it was determined that $19,837.00 in charges were billed at a rate at which the attorney seemed overqualified for the task. Examples of these overqualified charges include charges for organizing documents and updating the case calendar.