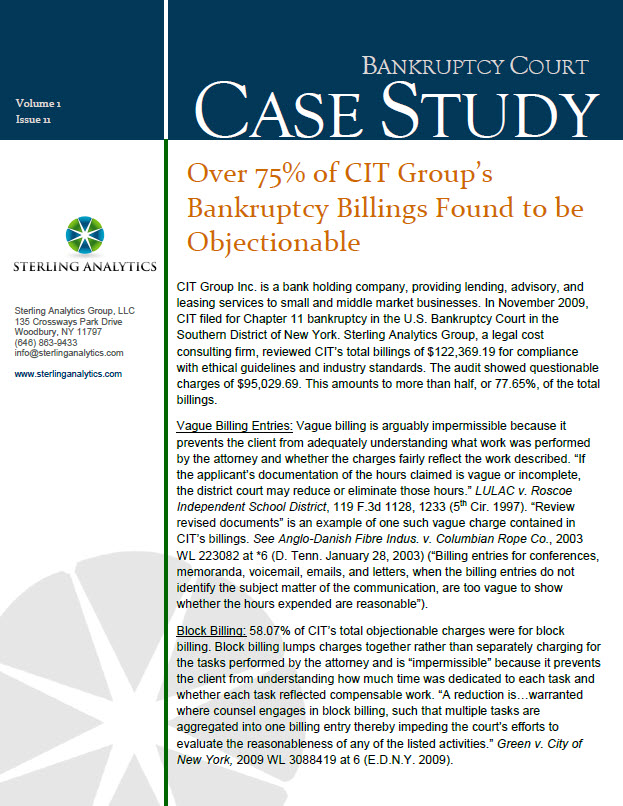 CIT Group Inc. is a bank holding company, providing lending, advisory, and leasing services to small and middle market businesses. In November 2009, CIT filed for Chapter 11 bankruptcy in the U.S. Bankruptcy Court in the Southern District of New York. Sterling Analytics Group, a legal cost consulting firm, reviewed CIT’s total billings of $122,369.19 for compliance with ethical guidelines and industry standards. The audit showed questionable charges of $95,029.69. This amounts to more than half, or 77.65%, of the total billings.

Vague Billing Entries: Vague billing is arguably impermissible because it prevents the client from adequately understanding what work was performed by the attorney and whether the charges fairly reflect the work described. “If the applicant’s documentation of the hours claimed is vague or incomplete, the district court may reduce or eliminate those hours.” LULAC v. Roscoe Independent School District, 119 F.3d 1128, 1233 (5th Cir. 1997). “Review revised documents” is an example of one such vague charge contained in CIT’s billings. See Anglo-Danish Fibre Indus. v. Columbian Rope Co., 2003 WL 223082 at *6 (D. Tenn. January 28, 2003) (“Billing entries for conferences, memoranda, voicemail, emails, and letters, when the billing entries do not identify the subject matter of the communication, are too vague to show whether the hours expended are reasonable”).

Block Billing: 58.07% of CIT’s total objectionable charges were for block billing. Block billing lumps charges together rather than separately charging for the tasks performed by the attorney and is “impermissible” because it prevents the client from understanding how much time was dedicated to each task and whether each task reflected compensable work. “A reduction is…warranted where counsel engages in block billing, such that multiple tasks are aggregated into one billing entry thereby impeding the court’s efforts to evaluate the reasonableness of any of the listed activities.” Green v. City of New York, 2009 WL 3088419 at 6 (E.D.N.Y. 2009).

Multiple Attorneys at Meetings: 12.57% of CIT’s billings represented charges for multiple attorneys at meetings. This practice is generally unfair to the client because it results in the client being charged multiple times for work that can be performed by one attorney. Therefore, usually only one attorney is needed at depositions, hearings, and outside conferences. “In situations where more than one attorney attends a hearing or conference, there must be a showing that each attorney contributed to the hearing or conference.” In re New Boston Coke Corp., 299 B.R. 432, 445 (Bankr. E.D. Mich. 2003).

Overstaffing: Using an excessive amount of attorneys or paralegals typically results in unnecessary duplication of work. The client should not have to pay for the work of multiple attorneys or paralegals where such work could be completed by one or a few. See Schlacher v. Law Offices of Phillip J. Rotche & Associate, P.C., 574 F.3d 852, 858 (7th Cir. 2009) (“Though efficiency can sometimes be increased through collaboration…overstaffing cases inefficiently is common, and district courts are therefore encouraged to scrutinize fee petitions for duplicative billing when multiple lawyers seek fees”).

* In re CIT Group Inc. and CIT Group Funding Company of Delaware, LLC