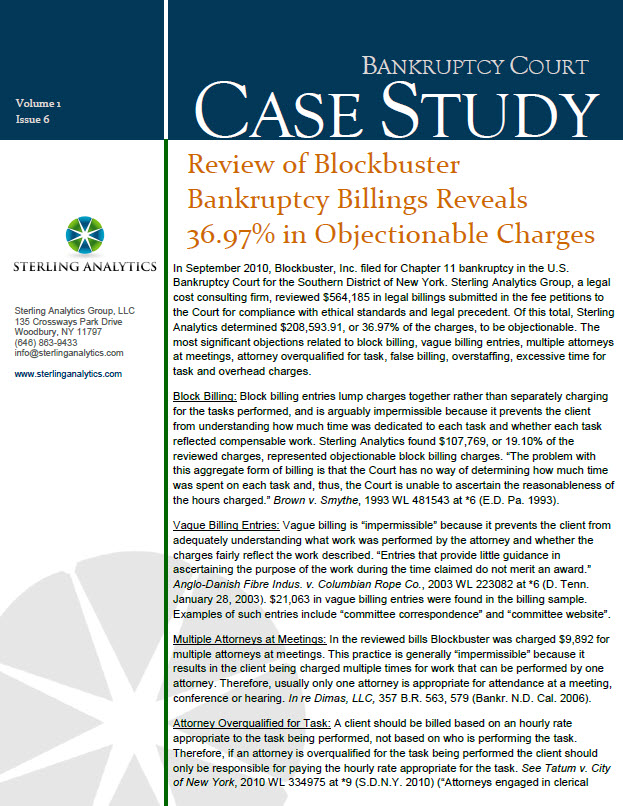 In September 2010, Blockbuster, Inc. filed for Chapter 11 bankruptcy in the U.S. Bankruptcy Court for the Southern District of New York. Sterling Analytics Group, a legal cost consulting firm, reviewed $564,185 in legal billings submitted in the fee petitions to the Court for compliance with ethical standards and legal precedent. Of this total, Sterling Analytics determined $208,593.91, or 36.97% of the charges, to be objectionable. The most significant objections related to block billing, vague billing entries, multiple attorneys at meetings, attorney overqualified for task, false billing, overstaffing, excessive time for task and overhead charges.

Block Billing: Block billing entries lump charges together rather than separately charging for the tasks performed, and is arguably impermissible because it prevents the client from understanding how much time was dedicated to each task and whether each task reflected compensable work. Sterling Analytics found $107,769, or 19.10% of the reviewed charges, represented objectionable block billing charges. “The problem with this aggregate form of billing is that the Court has no way of determining how much time was spent on each task and, thus, the Court is unable to ascertain the reasonableness of the hours charged.” Brown v. Smythe, 1993 WL 481543 at *6 (E.D. Pa. 1993).

Vague Billing Entries: Vague billing is “impermissible” because it prevents the client from adequately understanding what work was performed by the attorney and whether the charges fairly reflect the work described. “Entries that provide little guidance in ascertaining the purpose of the work during the time claimed do not merit an award.” Anglo-Danish Fibre Indus. v. Columbian Rope Co., 2003 WL 223082 at *6 (D. Tenn. January 28, 2003). $21,063 in vague billing entries were found in the billing sample. Examples of such entries include “committee correspondence” and “committee website”.

Multiple Attorneys at Meetings: In the reviewed bills Blockbuster was charged $9,892 for multiple attorneys at meetings. This practice is generally “impermissible” because it results in the client being charged multiple times for work that can be performed by one attorney. Therefore, usually only one attorney is appropriate for attendance at a meeting, conference or hearing. In re Dimas, LLC, 357 B.R. 563, 579 (Bankr. N.D. Cal. 2006).

Attorney Overqualified for Task: A client should be billed based on an hourly rate appropriate to the task being performed, not based on who is performing the task. Therefore, if an attorney is overqualified for the task being performed the client should only be responsible for paying the hourly rate appropriate for the task. See Tatum v. City of New York, 2010 WL 334975 at *9 (S.D.N.Y. 2010) (“Attorneys engaged in clerical tasks should be compensated at the rate for clerical employees, or, if the task at issue is the type included in overhead, they should not be compensated at all”). Sterling Analytics found $14,910.50 of charges billed by an attorney overqualified for the task, including tasks such as “revisions to firm calendar”.

False Billing: “Falsely” billing a client for expenses or fees is clearly impermissible as it is dishonest, fraudulent, and deceitful. “Billing practices, like every other aspect of client dealing, should be conducted in a scrupulously honest manner.” Florida Bar v. Herzog, 521 So.2d 1118, 1120 (Fla. 1988). There were many instances in the billing sample where two attorneys charged different amounts of time for attending the same meeting. For example, one attorney charged 1.4 hours and another only charged 0.4 hours for attendance at the same meeting. Sterling Analytics found $30,723, or 5.45%, of “false” billing charges in the reviewed bills.

Overstaffing: The client should not have to pay for the work of multiple attorneys or paralegals where such work could be completed by one or a few. For example, Blockbuster was charged by 3 attorneys to review and revise the same document. $11,850.50 in objectionable charges for overstaffing was found in the billing sample. “Using multiple attorneys in a simple case…poses the serious potential…for duplication of work or overstaffing.” Tucker v. City of New York, 704 F.Supp.2d 347, 355 (S.D.N.Y. 2010).

Excessive Time for Task: A client should not be billed for excessive time spent performing tasks that could have been performed in less time. See Ackerman v. Western Elec. Co., Inc., 643 F.Supp. 836, 862 (N.D. Cal. 1986) (holding plaintiff was not entitled to an award of attorney’s fees for hours which were duplicative, unproductive, excessive or otherwise unreasonable). Such practices typically result in overbilling and usually warrant a fee reduction. Of the reviewed bills, $10,674, represented excessive time for the task charged. For example, Blockbuster was billed 1.7 hours for “emails with debtors and committee members”.

Overhead Charges: A lawyer may not separately charge for general office overhead expenses unless the client has agreed in advance to such charges in the retainer agreement. $1,041.91 of the total reviewed bills represented overhead charges, including charges for meals, supplies, parking, and telephone, among other items. See In re Theopholis Thacker, 48 B.R. 161, 164 (N.D. Ill. 1985) (holding overhead includes office supply expenses, telephone expenses, and the local commuting and meal expenses of employees).