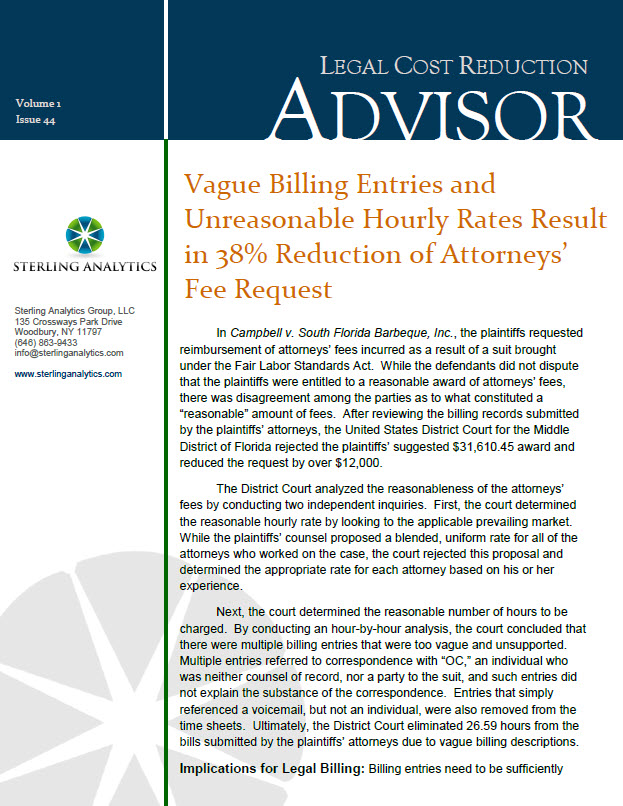 In Campbell v. South Florida Barbeque, Inc., the plaintiffs requested reimbursement of attorneys’ fees incurred as a result of a suit brought under the Fair Labor Standards Act. While the defendants did not dispute that the plaintiffs were entitled to a reasonable award of attorneys’ fees, there was disagreement among the parties as to what constituted a “reasonable” amount of fees. After reviewing the billing records submitted by the plaintiffs’ attorneys, the United States District Court for the Middle District of Florida rejected the plaintiffs’ suggested $31,610.45 award and reduced the request by over $12,000.

The District Court analyzed the reasonableness of the attorneys’ fees by conducting two independent inquiries. First, the court determined the reasonable hourly rate by looking to the applicable prevailing market. While the plaintiffs’ counsel proposed a blended, uniform rate for all of the attorneys who worked on the case, the court rejected this proposal and determined the appropriate rate for each attorney based on his or her experience.

Next, the court determined the reasonable number of hours to be charged. By conducting an hour-by-hour analysis, the court concluded that there were multiple billing entries that were too vague and unsupported. Multiple entries referred to correspondence with “OC,” an individual who was neither counsel of record, nor a party to the suit, and such entries did not explain the substance of the correspondence. Entries that simply referenced a voicemail, but not an individual, were also removed from the time sheets. Ultimately, the District Court eliminated 26.59 hours from the bills submitted by the plaintiffs’ attorneys due to vague billing descriptions.

Implications for Legal Billing: Billing entries need to be sufficiently specific in order to even begin an inquiry into the reasonableness of a legal fee. If a billing entry lacks specific details regarding the task, it makes it nearly impossible for a client to determine if the entry is proper. An entry that simply reads “voicemail” leaves the client with open ended questions. For whom did the attorney leave a voicemail? What was the voicemail about? Was the voicemail made in furtherance of my case?

As demonstrated by this case, courts are reluctant to compensate an attorney for hours expended when the billing entries are vague. Thus, if it is not clear from a billing entry what exactly was performed by the attorney, clients should question such charges. It is also worthwhile noting that even if a billing entry is not vague, this does not imply that it is a permissible charge. For instance, generally speaking, a client is not responsible for the overhead expenses of a law practice, even if the billing entry is sufficiently detailed.