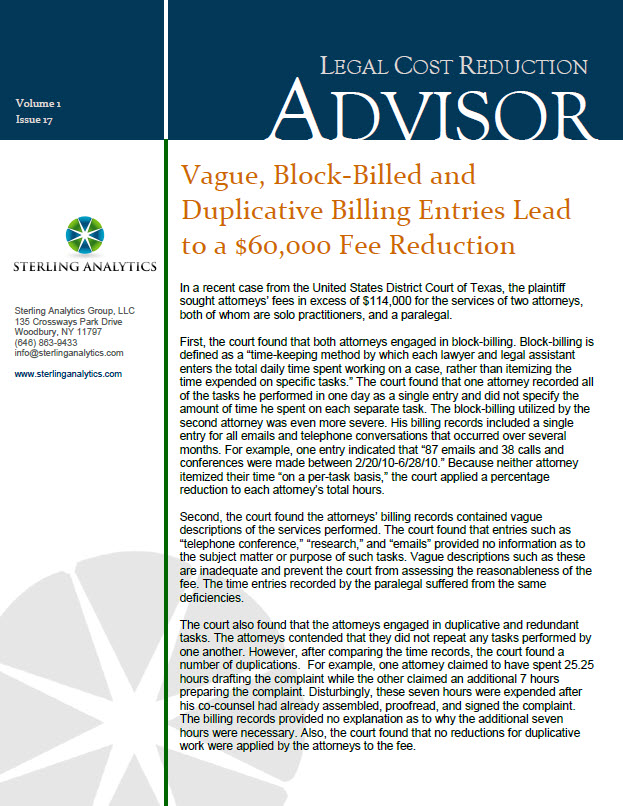 In a recent case from the United States District Court of Texas, the plaintiff sought attorneys’ fees in excess of $114,000 for the services of two attorneys, both of whom are solo practitioners, and a paralegal.

First, the court found that both attorneys engaged in block-billing. Block-billing is defined as a “time-keeping method by which each lawyer and legal assistant enters the total daily time spent working on a case, rather than itemizing the time expended on specific tasks.” The court found that one attorney recorded all of the tasks he performed in one day as a single entry and did not specify the amount of time he spent on each separate task. The block-billing utilized by the second attorney was even more severe. His billing records included a single entry for all emails and telephone conversations that occurred over several months. For example, one entry indicated that “87 emails and 38 calls and conferences were made between 2/20/10-6/28/10.” Because neither attorney itemized their time “on a per-task basis,” the court applied a percentage reduction to each attorney’s total hours.

Second, the court found the attorneys’ billing records contained vague descriptions of the services performed. The court found that entries such as “telephone conference,” “research,” and “emails” provided no information as to the subject matter or purpose of such tasks. Vague descriptions such as these are inadequate and prevent the court from assessing the reasonableness of the fee. The time entries recorded by the paralegal suffered from the same deficiencies.

The court also found that the attorneys engaged in duplicative and redundant tasks. The attorneys contended that they did not repeat any tasks performed by one another. However, after comparing the time records, the court found a number of duplications. For example, one attorney claimed to have spent 25.25 hours drafting the complaint while the other claimed an additional 7 hours preparing the complaint. Disturbingly, these seven hours were expended after his co-counsel had already assembled, proofread, and signed the complaint. The billing records provided no explanation as to why the additional seven hours were necessary. Also, the court found that no reductions for duplicative work were applied by the attorneys to the fee.

Implications for Legal Billing: Bock-billing is an impermissible billing practice used frequently by attorneys. Block-billed time entries are inadequate as they do not accurately indicate the time expended on each separate task. When tasks are lumped together into a single entry, it is impossible to determine the amount of time spent on a particular task. Without an accurate time entry for each task performed, it is difficult to determine whether the hours billed are reasonable.

The recording of vague task descriptions is also considered an improper billing practice. Vague time entries are inadequate because they lack the details needed to determine whether the time was reasonably expended. For example, an entry that lists the task “research” is not sufficient because the client is unable to determine what was researched or the purpose of the research. Likewise, an entry for “telephone conference” does not specify the subject matter or other participants of the conference.

When engaging the services of two separate counsel, it is important to ensure that they are not completing duplicative tasks. Redundant work can quickly lead to inflated and excessive fees. This result is exemplified in this case where the attorneys spent a total of 32.25 hours drafting a fairly simple complaint. Because seven hours were spent by one attorney after his co-counsel had basically completed the complaint, it is not clear what value the additional seven hours added to the final product. It is unethical for an attorney or multiple attorneys to engage in duplicative tasks to inflate the fee. As in this case, doing so could result in a significant fee reduction.